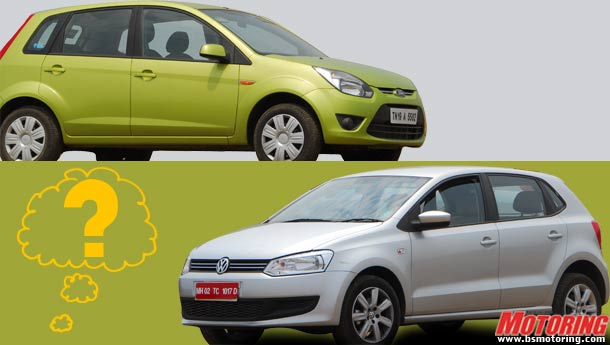 Our phones have been ringing off the hook. We've even done a comparison story in our April 2010 issue with the Fiat Punto, but we still had to answer this one. Is the pricier but newer Polo better than Ford's re-hashed but cheaper last generation Fiesta for India?

The Polo is the fresher car here, no doubt about that. Penned by a design team headed by design legend Walter Da Silva, its Audi-esque bumper and smart head lamps sway your attention in its direction. The Figo on the other hand looks a bit traditional and it's only its bright colours like the lime-green number you see here that gives it a feeling of youth.

On the inside, it's the Polo that trumps the Figo for space. The seats are nicely bolstered and comfortable, while at the rear there is marginally more legroom and headroom in the Vee Dub. The Figo's lack of power windows at the rear and the fact that they roll down only 60 per cent make the rear feel a bit claustrophobic. The small Ford's build quality is quite good for the price, borrowing pretty much the entire dashboard and switchgear from the Fiesta with changes to its silver shroud on the centre console and the addition of a music system with blue tooth. The red treatment to the dash is optional, though not to everyone's liking. The Polo on the other hand feels slightly better built but spec to spec lacks critical features such as vanity mirrors and audio controls for the steering even on the Highline. It's boot too is smaller than the Figo's.

On the move, it is the Polo that feels quicker off the line thanks to its better gearing lower down and slightly better power and it does so even on the spec sheets, though by a very small margin. The Figo's 1.2-litre petrol engine feels a tad underpowered and not staying in the right gear can be a fairly unrewarding experience. It's only with the 1.4 Duratorq diesel that the Figo's potency truly comes to light. The chassis balance and steering feel are the best here with the Polo's steering more electric in its response in comparison. Both cars dismiss bad roads with the kind of aplomb reserved for well-built C segment cars and feel built to last a lifetime.

In the end, it all boils down to whether you are willing to spend up to Rs 1 lakh extra on the Polo over the Figo. If you want a car that is contemporary, that is pretty much the same as the Europeans get currently and has a very good package overall then the Polo is what you should be looking at. It comes across as a breath of fresh air, something we only experienced with the Suzuki Swift some five years ago. If you are still after value, don't mind the fact that the car you are driving is based on a six-year old platform (yet very capable) and like your cars to be traditional then go for the Figo.