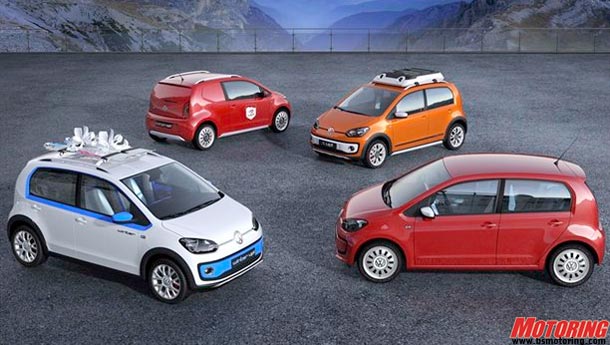 VW's latest small car offering in the international market is the Up! (exclamation mark included) city car. The sales for the Up! have barely started and VW is already planning on expanding the line-up.

Originally launched as a two-door four seater powered by a 1.0-litre three-clylinder petrol engine, the first of the new variants that will make it onto roads will be a four-door five-seater variant. This version is the one that will most likely make it to our market, either as a VW or possibly a Skoda.

Then there's the Swiss Up! For the hosts of the upcoming Geneva motor show, VW decided to deck up an up! model with a Swiss flag motif on the outside, with a red body shell with white doors and wheel caps, and a georgeous leather and alcantara interior. Where do you put your swiss army knives? They've thoiught of that too, with pockets provided to stow away your pocket knives.

For the winter and it's associated sports, VW has the perfect vehicle to tackle the slopes out there with the newly launched Winter up!

It's based on a slightly higher-riding and more rugged-looking cross up! platform and comes with a built-in snowboard or ski carrier on the roof. This four-door car should get you to your favourite winter wonderland with ease.

Another of the Up!s based off the Cross up! concept is the x up! This is supposed to be the expedition edition of the up! which is equipped with a roof monuted storage box and built-in search lights. It's not just for show, either. The x up! comes with flared wheel-arches and solid underbody cladding to protect the front and rear axles.

The last of the four special up!s VW has planned for Geneva is the Cargo up! panel van. Well, we can't exactly call it a van but it does make for a good intra-city delivery vehicle. The interiors have been completely stripped out to allow for more cargo room. The only thing that remains is the console and the drivers' seat. Cargo capacity of the cargo up! goes up from the 951-litres in the standard car to 1400-litres.