Volkswagen New Beetle - To Beetle or not to New Beetle 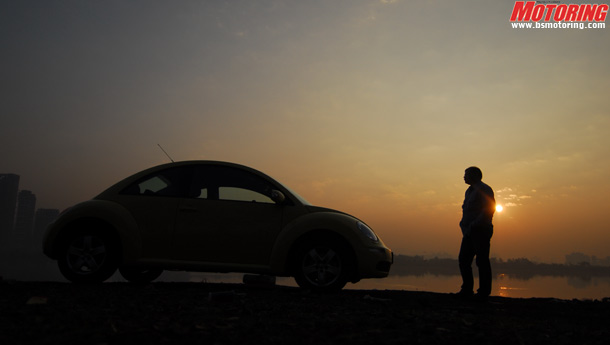 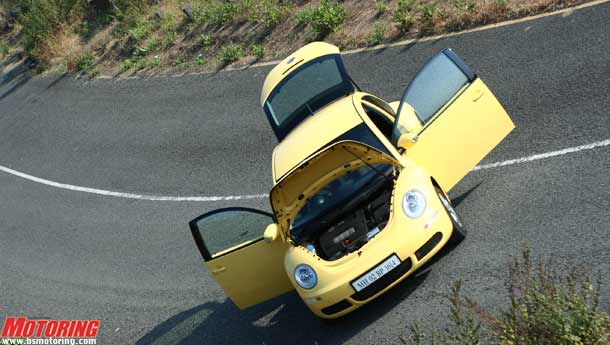 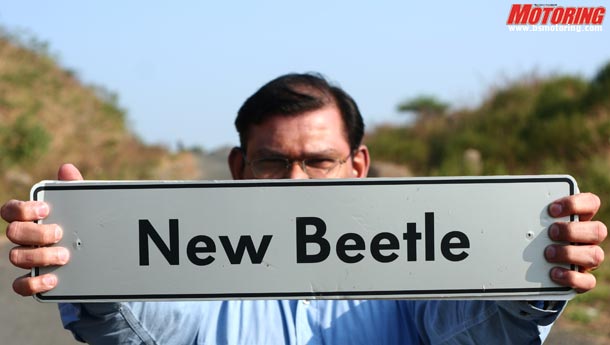 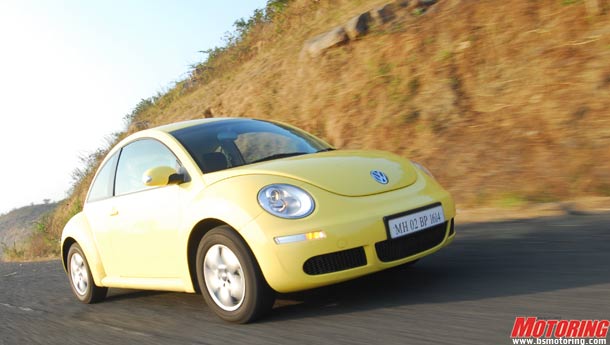 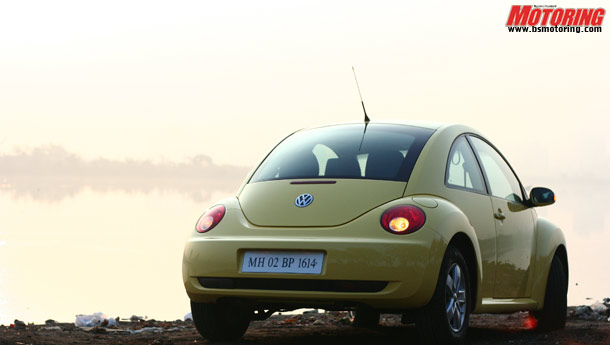 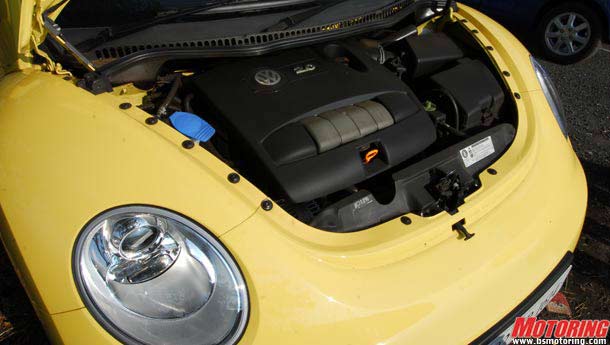 I get annoyed by those precocious kids you see in those movies and ads. They are so intelligent that they give Einstein an inferiority complex and so saccharine-sweet that you get diabetes by just looking at them. The problem is precipitated because they <I>know<I> it. The New Beetle from Volkswagen is something like them. It is cho-chweet and so clever that you feel like pinching its cheeks. What’s worse is that it actually has them. All that makes it a superstar on Indian roads; it attracts mobs of admirers and gawkers who all look as if they are hopeless extras in the crowd scene of a Bollywood movie. With additional props like cellphone cameras. It’s like a mobile billboard for Volkswagen.

Then they look at the chump sitting inside – and the only thing that’s going on in their minds is ‘What’s a car like you doing with a guy like this?’ Good question. This car is for hair dressers or fashion designers. And girls with rich fathers or wealthy husbands or to be politically correct, wealthy women. It goes well with teddy bears and cuddly toys, especially with its ‘I need a hug’ look. It’s certainly not for a straight, forward person like me. That too, one who owns a classic Beetle from 1960, painted in identical colours. But I am just doing my job. This car is not about performance or the quarter-mile drag. Nor is it about handling and cornering. So this whole story is not a typical Road Test No 347. Yet there is a section dedicated to the performance and dynamics of the New Beetle, so you can head straight to that. For the rest of you, it’s about the philosophy of the New Beetle and what it means to me, an owner of the original. Ready?   Catching the Love Bug

Okay, everybody knows the genesis of the original Beetle. That it became part of popular culture is not surprising. The Beetle’s attributes of reliability, quality, affordability and cute looks made it stand apart from any other automobile that existed in the world. Its appeal was like God – it was universal. It became a legend in its lifetime and that in turn extended its lifetime. What’s amazing is that when the New Beetle came along in 1998, the old one was still in production. But why the hell did the new one come along?

It all started with Concept 1 that was shown at the Detroit Motor Show in 1994. It was just a design exercise then, carried out by J Mays (who joined Ford later) and Freeman Thomas. But by the Geneva Motor Show in the same year, the sensation that the car created at Detroit had a multiplier effect. The Americans loved it, followed by the Europeans. And that response was enough to make Volkswagen’s Ferdinand Piech give it a go-ahead for production. The car that emerged was based on the Golf Mark IV/Audi A4 platform and was every inch a modern car that cued the original. The success of the New Beetle doesn’t mean that Mays’ retrofuturism worked. Look what happened to the Ford Thunderbird despite Halle Berry in that Bond movie.

Anyway, the timing of the New Beetle was excellent, especially in the all-important US market. It was a big hit with the so-called baby boomers – affluent people who wouldn’t mind paying more money for the nostalgia they left behind. Though it’s not as huge a hit as the original, the New Beetle has been a success for Volkswagen in every sense. The New Beetle was pulling at emotional heartstrings, and that’s a powerful motive.   VW goes bananas

The New Beetle is already 11 years old. That’s way too long for a VW car to be produced without going for a complete replacement. The average life of a VW car should be about seven years, I guess. So when the New Beetle is up for replacement, will it be made on a new Golf platform and be called the New New Beetle and will they retrofit the New Beetle tag as the Old New Beetle? Brr. Confusing, isn’t it?

So what according to me should VW have done instead of a mere reskin of a Golf? They should have captured the essence of the original Beetle, its spirit rather than its appearance. And what is the spirit of the Beetle? Cheerful in appearance, simple in its technology, well-built, reliable, trouble-free and importantly, affordable to all. When Adolf Hitler laid down the foundations of what his people’s car had to be, he had the pulse of what the people wanted in that era in his mind. With the New Beetle perhaps VW should have done that – make it a people’s car for the 21st century. Well thankfully, they are doing just that with the Up. Realisation has finally dawned at Wolfsburg, but the thing is their hand was forced – while they could have thought of it early on, in the first place. Still, it’s not too late.   Fully loaded

Back to the New Beetle then. The excitement it creates is irrepressible. It’s like a star on Mumbai’s roads, whether it’s parked or on the move. No other car comes close to the excitement this one creates – not even a Ferrari can make people react the way they do when they see the New Beetle. Its chubby lines, iconic shape and that shade of bright yellow all come together to attract the attention of ALL age groups.

But here is the point: most of the people who are all excited about this car don’t have the knowledge (or maybe peripherally, at best) about its legendary predecessor. They just look at its form and its come-hither appearance and are immediately smitten. They don’t have the emotional baggage of the past, they don’t have nostalgic strings to be tugged at, they don’t relate to its platform sharing background. People just look at the New Beetle for what it is and appreciate it. It is people like me who are burdened by the knowledge of the past who look at the car with a slightly jaundiced eye.

You can look at the New Beetle as a pretender to the throne, as a slick-looking imposter. Or you can look at it as a radical, fresh-looking car that stands out on our roads, a cute car that brings a smile to everyone’s face. Either way, you won’t be wrong.

So how’s the Bug to drive?

Ignore its overall looks and a deep dashboard that stretches to eternity, and you get a car that’s quite easy to pilot. Volkswagen is offering the Beetle in India with a four-cylinder 1984cc petrol engine that produces 115 bhp at 5400 rpm and 17.5 kgm at 3200 revs. It’s an engine which is also as old as the New Beetle. Performance from the engine is pretty cheerful, but nothing exceptional. It is relaxed, smooth and has an enjoyable range between 2000 and 3500 rpm. In this zone, the New Beetle is quite peppy and would be quite a sight to see from the outside. The six-speed automatic gearbox is also a generation old now and is the weak link in the powertrain. Upshifts are phlegmatic and you need to manually override it if you want more control on your speeds. However, the performance from the engine is quite acceptable. A sub-6 second run to 60 kph and about 14 seconds to 100 kph is not that bad actually. So does the 170-plus kph top speed.

The steering is soft and devoid of any feedback, which is perfectly all right in a car like this. When it comes to ride, the New Beetle keeps the rough stuff away quite well. It is quite a comfortable car and you can do a good day’s drive without getting exhausted. That’s a typical VW attribute. When it comes to handling, the car’s age comes through. It’s not an engaging chassis anymore. It wallows in the corners, but the grip from the Pirellis are excellent. Still, this car is not meant to go through the motions as if it’s a sports coupe, so it’s all right. What it does best is cruise effortlessly on the highway or just showboat in the city – that is its raison d’être.

If you shut your eyes and drive the car (not that you should; it’s just a manner of speaking), the New Beetle feels like any other Volkswagen from that era in terms of feel, quality and design. But it’s really well built and looks as if it will last till all the old Beetles disappear from the face of the earth.