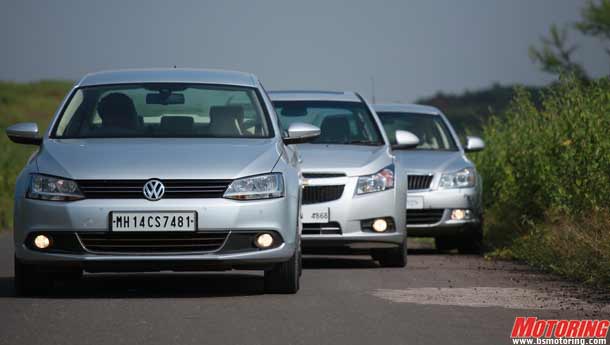 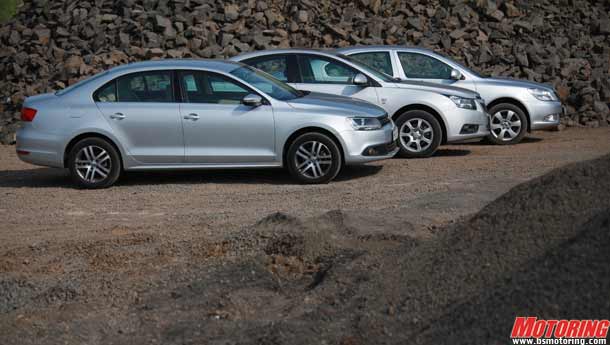 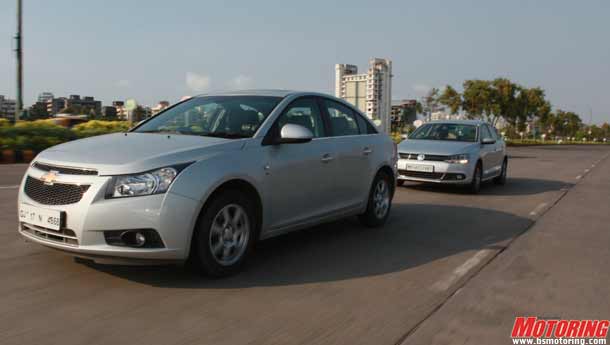 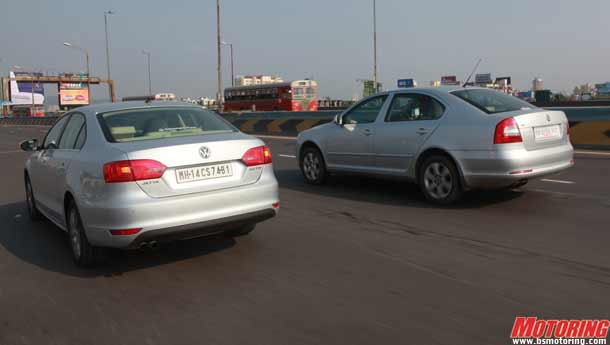 If there ever was a car that could be termed stoic, apart from a Lada, it would probably be the Volkswagen Jetta. While Europe has seen one in various forms for generations, we have only had it here since the last one made its debut in 2008. I clearly remember going on a drive in Germany and we had the option to sample the TSI engines to some stonking diesels. What we eventually got for our roads in the end was the tried-and-tested 1.9 TDI and the wheezy and dull 1.6 petrol.

There was nothing wrong with the last one – it was well built, went around corners neatly and didn’t look half bad either. Okay, so its engines were a bit of a letdown and then there was its cousin, the exciting Skoda Laura, that felt better to drive and the Chevrolet Cruze that would make a light snack of it in a straight line.

You could say that the Jetta needed some oomph, without losing out on its core identity. And that’s what should have been the brief of the new one, so here you have it, entering the ring yet again with a new pair of gloves, new shoes and a new attitude. Does it make an impression against the other two? We find out.

AM I A LOOKER?
The Jetta is a bit of a hit, bit of a miss on that count. The Vento resemblance factor takes away a lot from the design cues and in a shade like silver, the connection is just too strong. While the nose may be too much of a family look, it’s the overall stance and the way the tail has been given a treatment that makes it look somewhat appealing from the rear three-quarters. The non-LED day-time lights, the smart 16-inch wheels and the strong tail lamps are some of the key highlights of the overall vehicle’s design.

In comparison, the Cruze is more in-your-face. From the very strong front end to the equally strong character line that runs from the head lamps to the tail, the Cruze feels every bit an amalgamation of European and American infuences, as it should. The Laura, in this company, feels a tad underwhelming and we have never been big fans of the fish-eyed headlamps that it received in 2009. Apart from that, the rest of the design is inoffensive and pleasing enough and like the Jetta, it’s the rear three-quarters that are its best profile.

WHAT’S INSIDE ME?
The new Jetta platform has been built keeping some cost considerations in mind. VW believes that it needs to pare down the over-engineering and keep it to the basics in some areas so that its cars are more competitively priced, especially in more price-sensitive markets like the US. In the future, nearly all VW platforms will be as much as 30 per cent cheaper to build than the current ones and the Jetta is priced nearly USD 2000 less than its previous iteration. And this cost-cutting is no less visible than on the interior.

Take the lower half of the centre console for instance. It feels a bit low quality in comparison to the rest of the cabin and it is rather visible to the finicky kinds. The seats are leatherette, a form of leather and not the real deal. You will also find some unnecessary features like seat-warmers missing (the last car had them). In comparison to the Passat, the steering wheel feels like it’s built of a slightly cheaper material, which the previous Jetta never felt. You do however get a thorough touch audio system with Bluetooth, steering mounted controls, cruise control, six airbags (on the Highline) and the usual raft of safety and comfort oriented features. For most, the Jetta will come across as being well-built and without complaints, but the cost-cutting is obvious compared to the last car.

The Cruze is mightily loaded too and somehow, the cabin feels more vibrant and has a lot more pizzaz. The instrument binnacle is bright and looks straight out of a Corvette and so does pretty much the entire centre-console. The new black interiors are also a welcome addition and make it feel a bit richer. While the build quality isn’t in the same league as the Jetta or Laura, it’s still good enough by itself. The other grouses are the gear lever on the automatic that is too tall (it fouls with your hand sometimes) and the lack of single touch power up-down windows on all sides. Skoda’s Laura does feel a bit old even on the inside when placed next to the Jetta. But since it shares a lot of components with the last Jetta, the build quality of some of the bits are higher and there’s a certain heft to the way the controls move, which you may not find in the new Volkswagen. Quite loaded by itself, the Laura really won’t leave much room for regret.

In terms of comfort, the Cruze gets prominent seat bolsters at the front that are pretty good at keeping you snug when you want to drive fast, but the rear seats don’t have as much leg room and knee room is a bit tight at times if three passengers decide to hog the rear seat. Both the Jetta and Laura have pretty decent leg room and knee room at the rear, the Laura is a mite better in that regard, especially in terms of getting in and out. Front seats on both are quite decent, but we find the ones on the Laura offer a bit more support.

AM I QUICK?
The good thing about the new Jetta is that it’s done away with the 1.9 PD (Pumpe Duse) and brought in the 2.0 TDI with the medium-fat 140 bhp version powering the front wheels. For a brief period, this same motor in 110 bhp guise was offered in the last car, but that was just for a year. The old 1.9 PD had decent performance but felt out of whack at the top end and was rather boomy when you went flat out. However, you won’t complain with the 2.0 TDI. The power delivery is linear and there’s absolutely no let up in the way it goes hunting for the horizon. The dash to 100 kph comes up in just 9.2 seconds and even passing speeds are pretty impressive and a huge jump over the previous car. The transmission shifts quite smoothly if you are going hell for leather and unlike the 1.9PD where selecting D was always preferable over S, you can now go into S and feel the additional kick in the backside. The downside of a dual clutch tranny is that at some speeds if you decide to hold on to that particular speed, the gearbox threatens to either downshift or upshift, which can be a bit troublesome.

What surprised us was that the Laura 2.0 TDI with 140 bhp is still quicker. It’s some 0.3 seconds quicker to 100 kph and the passing speeds are also a touch better. Top speeds between the Laura and Jetta are near identical, so you won’t be complaining any time soon. The gearshifts though are a bit clunkier and not as smooth as on the Jetta. And the best part is that if you don’t want the 140 bhp version, a 110 bhp one is on offer too.

The Cruze has always been a bit of a straightline junkie and while the six-speed transmission here is no match for the lightning quick DSGs on the other two, it still performs commendably. While the dash from 0 to 100 kph takes 10.85 seconds, the top speed is not quite different from its manual cousin. Interestingly, the six-speed auto is a joy to use if you generally like to cruise around and take things as they come, though if you stamp on the throttle, be ready for a bit of gearbox lag. In terms of NVH, the Laura is outscored by the Jetta, and while the Cruze does have a loud engine, the cabin isn’t enveloped by tyre or wind roar.

AM I DYNAMICALLY SOUND?
Another big improvement with the Jetta is the overall dynamics. The older car was reasonably sporty with the right engine, but the new Jetta takes it a notch higher. The steering response for instance is more linear and there’s some feel from the rack. It turns in with more fluidity and there’s lots of grip on offer. The ride quality is a bit stiff, but not as stiff as the previous car with generally a bit more pliancy on offer. High speed stability in fact is better here than on the larger Passat, which says a lot about the overall depth of engineering.

The Cruze doesn’t exactly go around corners like a leech, in fact it settles into an understeer everytime you try to power out. That is because of the 150 bhp, torque steer and not much grip from the rubber, plus of course the lack of ESP which the other two have. The best way to enjoy the Cruze is to drive it a touch slower and you will find that it does behave admirably. The ride quality is probably the best of the three under most conditions, though it does tend to thud around a bit, especially over expansion gaps.

Skoda have found a perfect compromise between ride and handling. The steering is a bit slower turning than the Jetta and while it doesn’t have as much feel, it feels quite linear too in its action. Point the nose into a corner and the Laura will turn in neatly, but not as much as on the Jetta.The ride quality, like the Jetta is a bit stiff, but a bit better under most Indian driving conditions.

AM I ALL THAT GOOD?
This was a really closely fought one, with all three cars proving their mettle in more ways than one, but since there has to be a winner, let’s get on with it.

The Laura is the oldest of the lot and it feels its age here. The design is starting to look a bit tired, the interiors aren’t exactly feeling fresh and while performance and dynamics are quite decent, they aren’t strong hygiene factors for people looking at it as a chauffeur-driven car. On the whole, the Laura is a decent all-round package, but is left behind simply because it doesn’t offer anything special here.

If you enjoy driving, the Jetta will bowl you over. Performance and dynamics are its forte and it’s quite well-loaded too. At Rs 17.5 lakh, the Jetta is still a bit overpriced, but as a package it does come together quite well. Shame then, that it doesn’t have the build quality levels of its predecessor, but you can tend to overlook it if you don’t get picky.

The Cruze has to share the top notch with the Jetta for the simple fact that it not only looks and feels unique in comparison to the other two, it also offers a whole lot of kit, a stonker of a motor and what have you at a fairly reasonable price tag. If you generally enjoy taking things easy, the Cruze will win you over with its added X-factor.