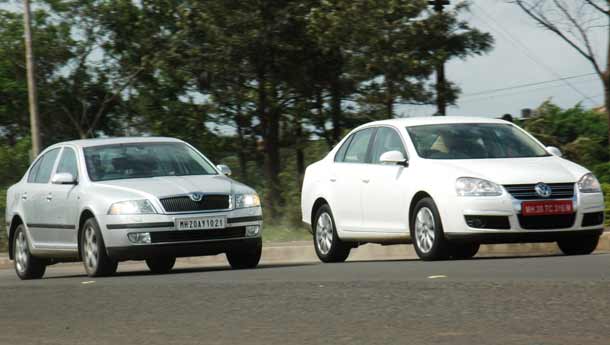 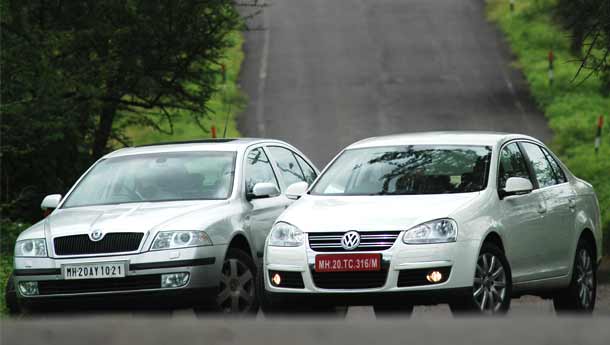 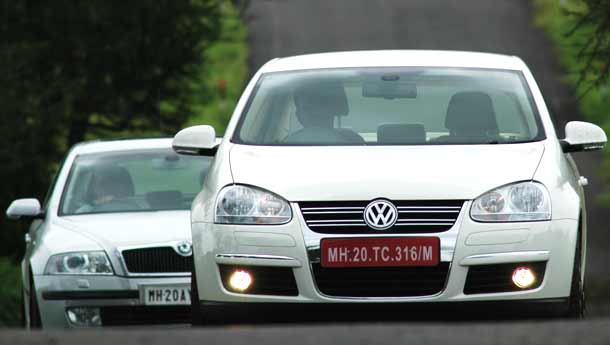 At times, motoring journalists can get it horribly wrong. Alright, make that  most of the time if you want. What else can explain the stupendous success that the Skoda Laura has had in India? That too, when the previous generation Octavia is still sold in the country at a bargain price point? I attributed more street-smartness to Indian buyers and thought they would get lured to the showroom seeing the Laura only to end up buying the Octavia in large numbers.

But even at Rs 17.13 lakh (ex-showroom, Mumbai for the L&K edition), there are enough takers for the Laura and the makeshift assembly unit at Aurangabad is struggling to put together enough cars to meet demand. The fact that the Superb was way too expensive and the Honda Accord never came with a diesel powerplant helped Skoda India slot the car better in the marketplace. But now there is some serious competition coming up from, ahem, within the family.

The Volkswagen Jetta TDI DSG retails at Rs 16.94 lakh (for the Comfortline which participated in this test) and is powered by the very same Pumpe-Duse diesel engine that you can find under the bonnet of the Laura. So if you are in the market for a premium diesel mobile, you have enough reason to be confused – it is entirely another thing that whatever be your decision, it is the VW bottomline that will flourish.   Looks and design
When VW bought the beleaguered Skoda brand and positioned it as a quality VFM alternative to cars built and sold in Europe, they had to ensure that the cars carrying the ‘winged arrow’ mascot looked different from cars coming out of Wolfsburg. The Octavia and Superb were made to look solid and dependable by relying on butch styling with rounded-off (rather than rakish) metal and plastic. They looked traditional yet sophisticated in a very Eastern-bloc manner. Paint an Octavia military camouflage, give it caterpillar tracks for boots and you are ready to add a turret to complete the equation. And the build quality was ‘tank-ish’ in any case. By the time the Laura (the new Octavia) was due, the car maker and its prospective buyer base was ready for something that looked more aerodynamic and stylish. The resulting car is a very handsome machine that can carry more expensive badges easily.

The Jetta is a scaled down Passat in more ways than one. And it should be, thanks to the exceptional panel fit and finish it has inherited. The problem is that it struggles to find an identity for itself. There is no flame-surfacing, bulged-out wheel arches or acres of chrome to make it look extra-special. It looks like a quality car, because it is one and not because designers tried hard to make it look so. And it looks honest and very capable while at it. But if your buying decision depended on looks and looks alone, then it is the Skoda that emerges a winner – a very stylish one at that.
Laura: ****
Jetta: ***

Interior and comfort
The Skoda interior is well conceived for European markets where it is doing rather well. The front seats are firm and supportive and instrumentation is comprehensive for its class. Rear seats are nothing much to write home about though, with limited legroom and an almost vertical rear backrest which is bound to ruin your spine on long road trips. Also lacking in the Laura is the kind of quality materials that makes a European car what it is – this is more Toyota territory than Opel. The Jetta, on the other hand, makes an effort to keep rear seat passengers comfortable, and that too, without compromising on the driver and passenger zones. The front seats fared well during our tests but gave the impression that they will not last – such was the amount of ‘give’ from the form and the seat superstructure. We liked the texture and colours in use and the overall cohesiveness of the decor. It is a very ergonomical place to be too. There is no mistaking that this is a Euro sedan that you are stepping into – even the adhesives smell quality.
Laura: ***
Jetta: ****

Engine and performance
Sure, the PD engine has had its time in the sun and VW is now following the herd with common rail direct injection diesels. Both the Jetta and Laura give you an opportunity to own and experience the marvellous, if complicated, solution of having individual fuel pumps for every cylinder. This inline four-pot motor displaces 1896cc to develop 103.5 bhp at 4000 rpm. But what is impressive is the torque figure of 25.5 kgm from 1900 rpm onwards. This motor breathes using a three valve per cylinder head and delivers 77 bhp/tonne performance for the Laura and 74.8 bhp/ tonne for the slightly heavier Jetta. The weight difference comes through in the acceleration times too, with the Laura being the marginally quicker car throughout the range. It is more than a second quicker to 60 kph, but the Jetta catches up brilliantly to post almost identical runs to 100 kph. Both cars can do around 190 kph too – if the driver is willing and the roads are arrow straight.

Despite being powered by identical powertrains, it is the Jetta that feels more potent – though the numbers favour the Laura. This, along with the agility and quality feel offered by the Jetta underpinnings, makes it a car that is more European in spirit than the Laura. The difference here is marginal and not something that can measured by testing equipment – spend time accelerating out of corners in both cars and you tend to go back to the Jetta! For the record, both these machines are capable of returning 14-15 kpl on a regular basis.
Laura: ****
Jetta: ****   Ride and handling
The previous generation Golf platform has delivered some of the best handling front-wheel driven cars in the business today. The Laura and the Jetta prove this fact. Precise steering with crisp turn-ins and neutral handling are the norm with these cars. Push the performance envelope around a corner and a combination of torque steer and understeer come into play – depending upon the speed. Ride quality of the Volkswagen felt marginally better to that of the Laura though – especially on bad roads. The more supple settings of the Laura tend to bottom out easily on broken roads, while the Jetta scampers through effortlessly. Both cars feature a McPherson strut setup at front and a multi-link suspension at the back – more suited for hatchbacks than grown up cars, but effective nonetheless.
Laura: ***
Jetta: ****

Verdict
In our country, there are people who are ready to pay a premium to buy a Fabia – such is the premium image of the Czech brand in the country. As we speak, Skoda has more equity over the mother brand in India, and that explains the success of the Laura despite the relatively high price point. Both the test cars that feature here retail at around the Rs 17 lakh bracket, with the VW slightly less expensive. But then, this is the top-end Jetta, with the petrol versions starting at a substantially lower price point. The original from Wolfsburg is a compelling buy, but it is playing the challenger in India thanks to the established nameplate that the Laura carries. So it narrows down to personal choice rather than a technical or performance difference here, and my vote goes to the Jetta. The more established dealer network of Skoda in India and the above-mentioned brand fixation works well for the Laura, though.