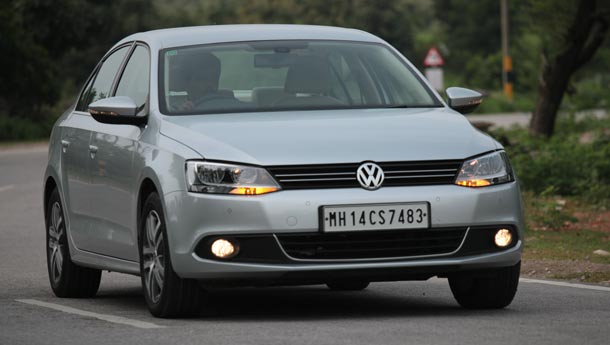 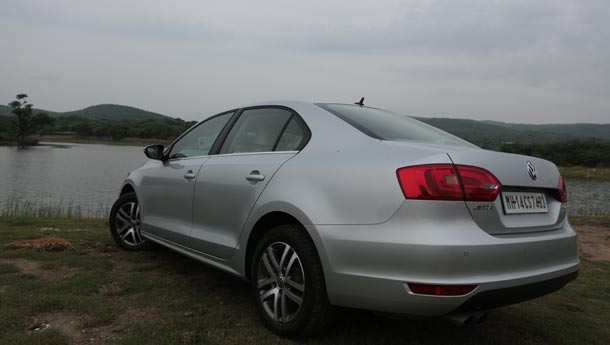 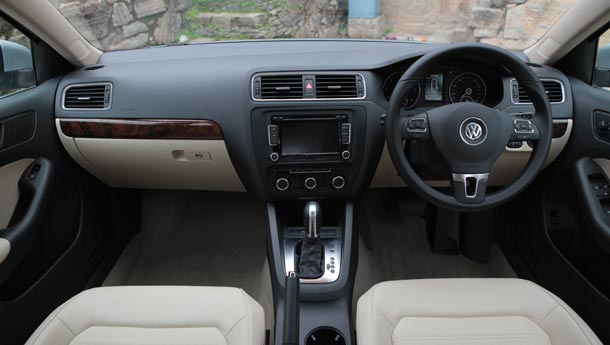 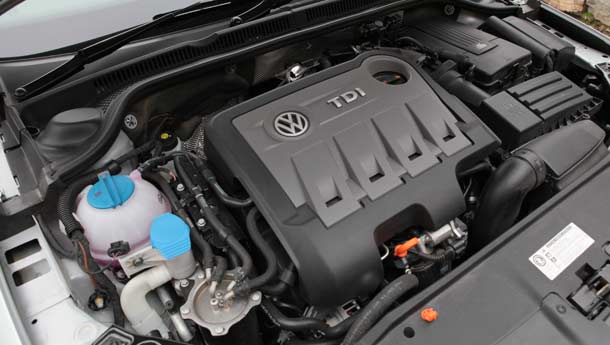 Immediate references to the Vento are inevitable and if you did so, don’t worry — we did it too. Understated has always been the operative word at Volkswagen and the Jetta sits neatly between the Passat and the Vento, perhaps leaning a bit too much toward its younger sibling. That said, the Jetta looks nothing like its predecessor and it now has more of a coupe-like stance, raked windscreen/A-pillar, et al. The distinctions are there, but in fine print.

The first thing you’ll notice is the incorporation of daytime running lamps in, again, a very Volkswagen family headlamp unit. The grille slats are familiar and so is the chin. What really gets your attention, though, is the way the bonnet merges with the fenders, a la the BMW 5 Series.

Get inside and you are again greeted with Volkswagen family traits, only this time they’re most prominent. The materials are all high-quality and it is as solidly built as any other car in its segment, perhaps even more. We drove the Jetta in Highline trim, which is the top-of-the-line variant and it (along with the Comfortline) gets leatherette upholstery although of a different design than the latter. Through the range, the Jetta gets genuine leather wrapped on the steering wheel, gearshift knob and the hand brake lever grip.

Much to our delight, the Highline/Comfortline trims come with an AUX-in port with eight speakers (the Trendline gets a CD-only unit with four speakers) all of which do their jobs reasonably well. The media player interface, a touch-screen affair, is the same as on the Skoda Yeti and the various controls for the media interface, lights, parking assist and such are intuitive and within easy reach of the driver and Volkswagen has really done well on the ergonomics front. The upper half of the two-tone (black top, beige bottom) dashboard is of the soft-touch variety and it feels plush enough. The interior space itself is great, with rear passengers still left with a few inches of knee-room even with the front seats pulled behind to the stop. The driver/co-passenger seats offer great lumbar support and the seats held composure quite well over our long-ish stint with the car. Our only gripe is that even on the Highline, only the driver’s seat is electronically adjustable. Come on, Volkswagen!

Now to get to the business-end of things, the powerplant. The Jetta only comes in the diesel format as of the moment and believe us, it’s an absolute cracker of an engine! The 1968cc, in-line four, common rail diesel engine is simply brilliant in the way it performs and is the only engine available across all trims. Only in the Highline does VW offer the option of a 6-speed DSG gearbox (apart from the standard 6-speed manual) and it is quick and then some, to say the least. The paddles shift through with ease and are generous even for my hands, which are the size of some people’s feet. Importantly, nowhere in the powerband are you greeted by a flat spot and we got to 210 kmph in no time, with the motor feeling capable of another 10 kmph or so.

Our route was a mix of straights and largely twisty roads, in the middle of which were us paddle-happy journalists blasting through the ‘box in Sport mode, enjoying every bit of the 138 bhp and 32.6 kgm available. Slot the ‘box into D and the Jetta regains its manners (or was it us?) and shifts earlier in the rev range — advisable if you’re ferrying family around who will most certainly be mindful of exuberant acceleration and the works. The manual ‘box was fun as well, with the clutch action being light and the shifts being fairly slick, although it’s the DSG that really does steal the show. Too bad you can’t have the DSG in the base variant, we say.

What really made things enjoyable was the handling. Fast sweepers at triple digit speeds? No problem! Even in the tightest of corners, body roll is minimal and the car feels very eager to take on corners. Ride quality, too, is exceptionally good and when we ran over some unexpected potholes at well over 90 kmph, all that filtered through was a muted thud. Yes, it is really that good. With four people on board and heavy luggage in the boot, the Jetta still pulled with as much poise and the rear suspension felt plush and not as stiff as it is without load.

What then is our verdict on Volkswagen’s newest number? The Jetta is a solid car with ‘great quality’ written over it in all-caps. The engine is a gem and the ride and handling are absolutely endearing. The insides are excellent but perhaps not as special as we’d have liked them to be. Most importantly, while the Trendline is priced at Rs 13.85 lakh (ex-showroom, Mumbai), the Highline DSG is tagged at Rs 17.47 lakh, which does seem a bit steep. It is in the Highline that the similarity to the Vento is most prominent, but then that is also the only trim which brings the excellent DSG ‘box along to the party. In our opinion, then, you must take the Jetta seriously.