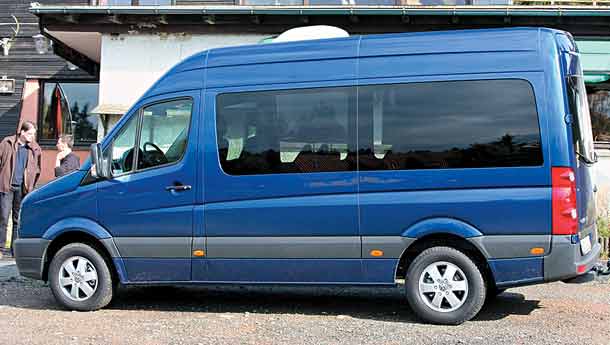 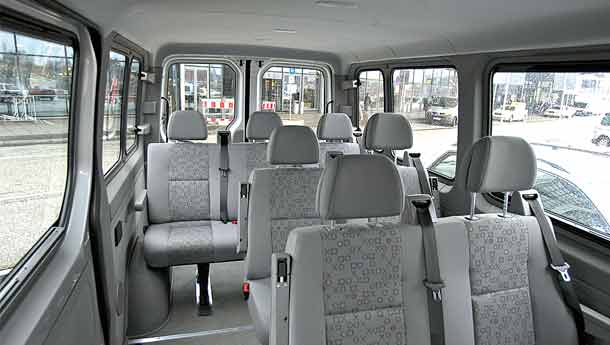 Nearly 1.2 billion people with places to go. And 3.3 million kilometres of roads to take them there. Yes, India is definitely on the move. But still, as of now, with the mere mention of ‘people-carrier’, buses crammed to the roof (and over it) come to mind.The good folks at Volkswagen Nutzfahrzeuge beg to differ. Their impression of carrying people consists of comfort, airconditioning, ample legroom, outrageous headroom, personal masseurs and the like. I didn’t see the masseuse in the accessory list, but personally, I think it would be a great option to offer.Getting back to reality, VW plans to introduce the Crafter and Caravelle – two people carriers – in India in the near future. With the current fuel prices and fast increasing traffic on Indian roads, it makes sense to introduce vehicles which can carry a large number of people in relative comfort and in the process, wean them off using their cars all the time. Besides, India is slated to become the largest market for commercial vehicles and VW plans to strike when the metal is getting hot, so to speak.

What is to be driven in India will obviously be driven by Indians. That’s why VW decided to fly down a handful of Indian auto journos to Germany to get behind the wheels of the Caravelle and the Crafter. And this is what one of them, me, had to say. Chop off a large section of the Great Wall of China, add four wheels and paint it a glossy blue – that’s how large the Crafter is. I had never driven a left-hand drive van this size before and certainly not on a highway almost devoid of a speed limit. But there I was, keys in hand, my knees almost jelly-like, being egged into the driver’s seat. I swallowed hard, thought about all the good times in my life and I silently bid adieu to this world.Climbing aboard (it’s akin to scurrying up a fire brigade snorkel – well, almost), I plonked myself in the driver’s seat. And heaved a sigh of relief when  the gear stick had an ‘A’ emblazoned on it. ‘Hmm, this shouldn’t be too scary,’ I thought to myself. By the time we got onto the autobahn, I became familiar with the Crafter’s dimensions. Till then, the poor bloke riding shotgun was instructed to keep a watch on the right, like a deck-hand on a ship’s bridge wing, to ensure I didn’t clip a parked car’s mirrors. The Crafter instantly made it known that it’s a diesel; it made no bones about it. The din is quite loud, especially when revving the heavy oilburner up, almost drowning the sweet voice of that German lady in the navigation system, telling me to take the next Ausfahrt to the right.

I drove the Crafter fitted with the 134 bhp, 2,461cc, five-cylinder diesel, with 30.5 kgm of torque available at as low as 2000 rpm. Although not as peppy as a Shakira number, the engine had a strong low and midrange punch. Getting up to the tonne is not hard work and does not take much time. Make no mistake, this is no tyre burning lunatic but nobody really expects a vehicle this size to blast past the sound barrier anyway.The nine-seater takes its time picking up speed. And the automatic transmission shifts slowly while letting you feel every gear change. But one must remember, this is a commercial vehicle after all, and lightning quick shifts aren’t really essential, just like thrust vectoring nozzles would be overkill on a C-130 Globemaster.A rack-and-pinion job takes care of pointing the Crafter in the direction you want it to go. Steering is light but feels pretty vague, especially at higher speeds and needs some getting used to. Speaking of high speeds, the Crafter I drove was the high roof version and at speeds above 100 kph, the buffeting of the wind onto the vehicle became very apparent and the VW began to wallow a bit. However, at lower speeds and on mountain roads, the Crafter felt quite planted.Braking was never a bother with the big VW. The brakes do not come on suddenly, but kill speed very effectively. I didn’t slam onto the brakes though as I didn’t want a handful of speeding cars to pile up into my rear – I was driving on the autobahn, remember?   There was no dearth of space in the Crafter, be it for a soccer mom driving her son and his rambunctious friends to the local soccer match or for a bunch of teens driving to the hills for a picnic, singing Cliff Richard’s Summer Holiday as they move along. Seating was extremely well laid out and all nine occupants were well taken care of. Legroom and headroom were well above what was required to be comfortable and the wide sliding door made entry and exit a cinch. The rear doors opened to a large storage bay that was enough to house the luggage of half a dozen auto journos, packed to capacity. Although this is a vehicle meant for commercial purposes, the fit and finish is remarkable. The plastics and trim looked rich and the ancillaries like the reading lights seemed like they were straight out of some luxury sedan. Come to think of it, the Crafter looked so well done that I would not be surprised if families took home a few. I know, I know, I wouldn’t want to be seen driving my folks around in a dwarfed bus disguised poorly as a van, but the Crafter is the real deal. But if size is an issue and a van the size of a small country isn’t your cup of tea, Volkswagen’s Caravelle is more your thing.

The Caravelle is a mid-sized van and driving it was far less intimidating than the Crafter, despite this too being a nine-seater. It was pretty nimble and more car-like. With the dimensions scaled down drastically, it was easier and more confident to drive in the city, especially by someone who’s only driven cars. Handling was decent and the Caravelle was quite sure-footed around the twisties.The version I drove seated nine in rows and no, it isn’t really possible for a ballerina to do her piece in the van. The driver’s cockpit was cramped and the gearshift tunnel kept hitting my right leg – as I said, it’s not as roomy as the Crafter. The dashboard was a tad cheap looking but the engine more than made up for all of that. VW’s Caravelle is sold worldwide with a choice of two petrol engines and a slew of four diesels. Although it isn’t clear which of these engines will be offered to the Indian buyer,

I drove a Caravelle with the sprightly 2.5 litre engine. The oil burner pulled away strongly at low and mid range but just like the Crafter, was slightly noisy. Auto transmission makes way for a six-speed manual gearbox in the Caravelle. Shifting through the gears was easy and the stick went through the cogs effortlessly; I pushed the van to about 160 kph and felt that it had much more steam left.With regard to the prices, VW is tight-lipped for now but we do know that they will be targeting hotels and the luxury taxi market. But like I said earlier, these two ‘commercial’ vehicles have the potential to find favour among private users too. Looking at Volkswagen Nutzfahrzeuge’s business plans, we won’t be surprised to see these VWs in India with Horn Ok Please written at the rear in German!