The Ameo has several segment-first features, courtesy its mid-size sedan sibling — the Vento

Yet another new car in the market and we are here with our ‘what’s inside’ article. The German auto giant — Volkswagen has launched its debutant Made-for-India product, the Ameo. The compact sedan undercuts almost all its rivals and is priced even lower than the Polo hatchback. The vehicle shares its face with the hatch, while the features and the cabin are shared between three cars from the Polo clan —  the Vento, the Polo and the Ameo. This helps the Ameo trump a lot of its peers in terms of features since most of them are based on their respective hatch counterparts, which sit a segment below the Polo. Here’s what the Ameo has to offer inside!

There is nothing surprising in the Ameo — the compact sedan presents almost everything the Polo and the Vento have to offer. The dashboard is a straight lift and so is the flat-bottom steering wheel, along with the colour scheme. However, the Ameo gets VW’s touchscreen infotainment system, which the automaker now also offers with the Polo and the Vento.

The center console is finished in brushed aluminium, although, the highlight is VW’s new touchscreen infotainment system. The new unit comes with MirrorLink support along with USB, Aux-in, USB, SD Card, CD/MP3 and Bluetooth phone integration.

All the additions that the Polo and the Vento had received over the years have been added to the Ameo as well — features such as cooled glove box, automatic rain sensing wipers, auto dimming inside rear view mirror, electrically foldable outside rear view mirrors and others.

The Ameo offers leather-wrapped flat-bottom steering wheel and gearbox knob. The steering wheel offers mounted controls for the infotainment system along with the segment-first cruise control. The instrument cluster is also similar to its siblings and the multi-info display offers information such as travelling time, distance travelled, digital speed display, average speed and fuel efficiency. 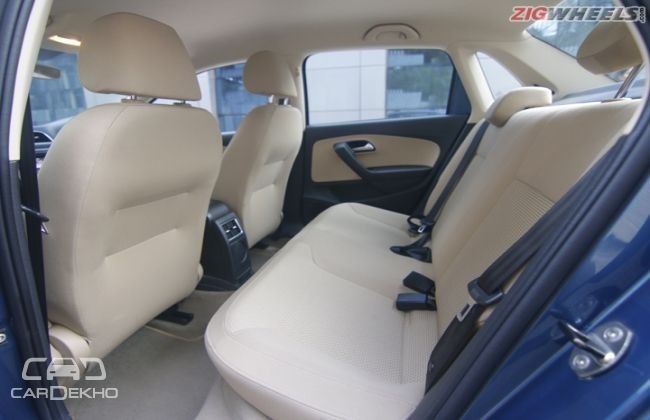 The rear legroom is a bit of a squeeze since the vehicle has borrowed the Polo’s platform, which is not known for its rear legroom. However, VW has tweaked the seats a little and there’s relatively more legroom in the compact sedan compared to the hatch. The vehicle has borrowed rear AC vents from the Vento, but misses out on the rear centre armrest, which most of its rivals offer. Speaking of the boot space, the Ameo comes with 330-litres of boot space and the rear seat backrest can be folded to increase the space further.

We’ll have to wait and see how Volkswagen’s debutant ‘Made-for-India’ product fairs in the Indian market. The German automaker has priced it competitively and it's coming with several segment-first features along with competent mechanicals.