Volkswagen Ameo - that's the name of the compact sedan

Maruti Suzuki and Tata Motors shed four per cent each on the back of a falling rupee and China slowdown worries. The weakness in the two heavyweights meant the BSE automobile index fell two per cent and was the second-largest loser among indices.

While the rupee was down slightly against the yen on Thursday, further weakness is expected to hit Maruti as yen imports (including royalty) account for 21 per cent of its revenues. A weaker rupee translates to a higher import bill and depresses margins. Every one per cent rise in yen hits margins 20 basis points (all others constant) and a per cent on the earnings. Currency is the biggest risk for Maruti, say analysts. 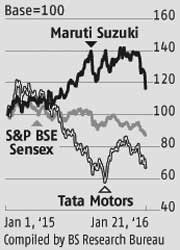 Barring this, Maruti is on a strong footing, with December sales recording a 13.5 per cent growth year-on-year. Launch of new, premium models in segments which are in demand should boost revenues and margins. In the December quarter, its volumes were up 16 per cent, led by Baleno, S-Cross and Celerio, while realisations were up 19 per cent.

Tata Motors’ stock would be influenced by China slowdown worries. The International Monetary Fund on Wednesday cut its global growth forecasts and expects the Chinese economy to grow at 6.3 per cent in 2016 as against 6.9 per cent in 2015. It has cut the growth forecast for the world’s largest economy, the US, by 0.2 basis points to 2.6 per cent (2015 growth at 2.5 per cent). China accounts for about 20 per cent of Jaguar Land Rover (JLR)’s global volumes, and since it is a high-margin market, it will hit JLR’s revenues and margins. The demand slowdown, slow ramp-up in China joint venture, as well as model phase-out and introduction meant that China’s contribution to JLR net sales have come down from over a third in FY14 to an estimated 20 per cent in FY17.

However, a slowdown in China is expected to be offset by improving sales in the UK, Europe, and the US, which in the December quarter saw a 40 per cent volume increase each. Sales in recent months have been driven by new models such as Discovery Sport and Jaguar XE. Analysts say strong developed market sales, gradual increase in China volumes, and a recovery in the stand-alone entity, Tata Motors, should keep revenues on track.