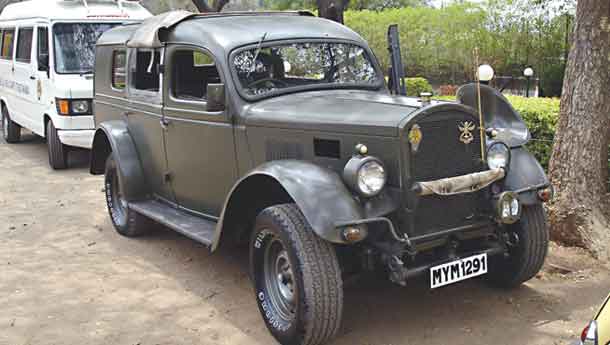 How an underdog took the honours

It was like any other lunch break in college, when I got a call from Srini, asking me to cover the annual Vintage & Classic Car and Bike Fiesta in Pune, organised by the Western India Automobile Association and Vintage & Classic Car Club of India. Well, before he could say concours d'elegance, I jumped at it, taking part in my dearest 1960 Standard Pennant (or 10, as she was called only in the Indian market... visit www.standardmotorclub.org.uk for comprehensive information on Standards, even the Indian cars).

BYH 5123 has been in our family from day one, which was of course December 26, 1960, bought new by my grand uncle Jehangirji, later passed on to his daughter, both of whom pampered the car like a child, and then to me three years back. A family heirloom, she is the love of my life. I also entered my other recent acquisition – also December 1960 – a Fiat 1100, which I got from its first owner (needless to say, a caring Parsi), with factory interiors and a genuine 60k miles on the odo. I've been a Fiat fanatic all my life, and am actively involved with the Fiat Classic Car Club of India here in Pune. This car, the 1100 103 D, retained the characteristic suicide doors of the infamous 1957 'dukkar', but featured the now familiar tiny tail-fins. A fantastic starter classic, they can still be found relatively cheap, with no dearth of spares, and are very useable on a daily basis. It's sad to see so many of them going for scrap these days, still not getting due recognition.

In the same vein, let me warn you first, for the rally, both the above cars come under a category termed 'non-classic' (as do Dodge Kingsways and Plymouth Savoys, and even Jeeps, I think) as they were assembled in India. Why geography plays an important role in ascertaining the heritage or classic status of a car, I cannot comprehend... oh, well. I did encounter initial resistance to enter the Fiat altogether, as they're 'quite common' I was told. Number of Rolls-Royces at the event? Eight. Number of Buicks? Six. Number of Fiats? Two. Non-classics. So if they aren't classic or vintage, they are, uh... regular cars? Sigh.

Everyone should make it a point to check out a vintage car rally some time. It's quite a sight, with the widest variety of cars parked side by side, crossing every spectrum (from Model Ts to the latest Rolls and everything in between), with equally quirky owners lavishing care and attention, spit-polishing their beauties, armed with a battery of cleaning equipment and feather dusters, while their families jealously look on. But in all seriousness, these people mean business! The lengths they go to get the vehicle as original as possible can be astounding, nitpicking on things like monogrammed bulbs and cables, which are usually invisible once fitted. The cars are cleaned and buffed so meticulously, you could eat off the engine bays!

Some really fabulous cars and bikes were around at this year's Pune event. There were rarities like a 1928 Henderson, a 1942 Indian, a 1962 Norton Dominator 650 SS, a 1956 BSA Gold Star, also familiar entries like an array of fantastic Rollers, a lone Bentley, some painstakingly restored Buicks from the 1930s and 40s, a unique Dodge bus besides the omnipresent Austin and Morris... Full marks to a lovely little 1957 Vespa, the lone scooter present, and to the Pune Municipal Corporation for completing the entire route in their 1956 Dennis Fire Engine – fully restored with all equipment intact and functional, and the original Rolls-Royce engine!

I was driving the Standard in the time-speed-distance rally, while fellow Fiat buffs Kishore and Suraj were in the 1100. Now, in my car I had college buddies Mujeer and Sudipto, first timers at the event. As we were flagged off, the real excitement began, trying to coordinate the distance covered (thankfully given in miles this year... most cars here have speedos calibrated in miles), time since flag-off, time between tulips, and speed on my erratically fluctuating Jaeger speedo. Quite exhilarating actually. And I realised the key is to have three engineering aspirants in the car to do the quick math (superlative number crunching, thanks guys!). The time controls were manned by an enthusiastic bunch of kids (like me, actually) while the traffic police made sure the participants never had to slow down, accompanied by genuine smiles and smart salutes. If only we had this treatment more often!

Now as we were nearing the end of the 16-odd mile route, traffic did keep us bogged down, and a frantic dart to the finish was called for, to make up for lost time. For a 46-year old 948cc car last overhauled in the 1970s, the way she handled pressure when pushed was quite a surprise. My navigators still shudder when I mention my 'expert' driving over the last couple of miles – why, even Stirling Moss raced one back in those days. The Standard 10's all-new monocoque introduced in the 1950s was quite a revelation, considering the competition at that time. A charming little car, it was produced in various permutations and combinations, and was amongst the last cars that were badged Standards, being later absorbed by Triumph (except here in India, where the name lived on for 20 years after that). Of course, stomp on the brakes and the only startling jolt you get is the one bringing you back to reality.

The only hitch was that the event could have been held earlier in the year, as by the first week of April it gets pretty hot, with so many cars (and drivers) boiling up. Fortunately, both my cars behaved themselves impeccably, not complaining the least. But then again, both are in daily use, and have been all their lives. There are 55,000 taxis in Mumbai, with around 53,000 of them Fiats, and sometime back, a large portion of them were Standards. If this isn't a testimony to their reliability, then I wonder what is.

This year, the rally ended at a better venue which had more place to park the machines and the prize distribution and dinner too was held at the same place. I was busy chatting with friends, not paying attention to the announcements, when I was called up on stage, having won the first prize for Best Performance! With competition from veterans taking part over the last 20 years, this was indeed an honour. Especially for us 'Non-classics' lovers!

Coffee, T or me: Edul Dhondy's beautifully restored 1921 Ford Model T, resplendent in 'any colour as long as it's black' was driven down from Mumbai. At one point, the majority of cars worldwide (around a third) were Model Ts, a feat not matched till today

Tour de force: Ramesh Thakker's 1925 Rolls-Royce 20 HP Barker Tourer once belonged to the Maharaja of Banswada. This car had covered an authentic 429 miles! Probably a record of sorts. Characteristic of Indian Rollers were the twin ventilation ducts up front and extra lights for shikaar

Medium rare: Sourced from the Maharaja of Mysore, Dhananjay Badamikar's 1942 Fordson is even fitted with a seat up front on the fender, again, legend has it, for shikaar. Made in few numbers, this vehicle is quite a rarity, bagging a prize for the most unique vehicle at the event

Fluid lines: The 1947 Chrysler Windsor has been with Rustam Jeejeebhoy's family from day one, and was recently exquisitely restored. Fitted with Chrysler's innovative Fluid Drive transmission system, making her a semi-automatic, the Windsor is pretty easy to drive

Tooth fairy: With her trademark 21-tooth grin, bulls-eye hood ornament and art deco dash, Zaheer Vakil's 1948 Buick Roadmaster sure makes heads turn wherever she goes. It's one amongst an army of Buicks Vakil owns

Four by two: Neville Choksi's awe-inspiring 1928 Henderson drew the most crowds at the event. It's fitted with an inline-four cylinder engine and a reverse gear mainly for sidecar setups (must be a beast to manoeuvre). Contrary to what you may think, those bright colours were offered by the factory

'Cette right: A very rare machine, with her engine fairing, bright red paint job and trademark fishtail exhaust, Sam Solomon's 1956 Velocette has been uprated to Clubman specs, making her a 500cc racer, correctly kitted with the smiths tacho. That rorty exhaust note does make the ground shake beneath your feet

Triumph of the spirit: The superbly restored 1958 Triumph Tiger belongs to Anil Bhingare. Triumphs of the era gained nomenclature according to top speeds, 100 implying she could do 100 miles an hour. The mainstay of our police force before the Bullets invaded, Triumphs are comparatively easier to chance upon, and an absolute joy to ride, even in everyday traffic

Rise of the machines: The Dominator at its peak. The 650 Sports Special was of higher spec, with its high-lift camshaft, twin Amals and an alloy head, while alloy wheel rims, clip-on handlebars were offered as options... ideal for taking to the track on Sunday and riding to work on Monday. This machine formed the basis of the later Commando and Atlas, legends in their own right. This 1962 Norton Dominator 650 SS belongs to Behram Marker

Light a Match: Sorab Bhathena's 1962 Matchless G80 is an all-original California-spec machine. It came with a frame and high rise handlebars unique to the American market. This 500cc single has been owned by Bhathena since the 1960s and he still uses it for long touring trips.