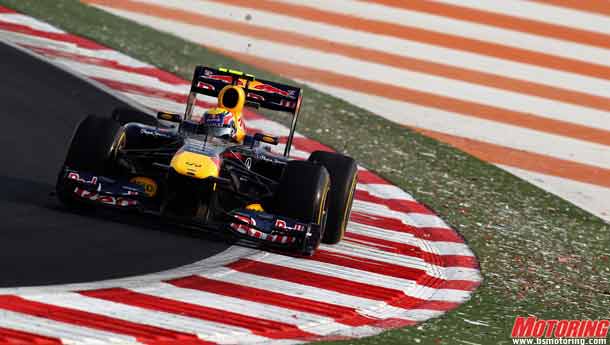 Karun Chandhok told us yesterday that Red Bull Racing usually keeps its cards close, and that an accurate estimate of the Austrian team’s pace would be only clear after the final practice session. After the final Saturday morning qualifying session concluded, turns out Karun was spot on. Despite the fact that Lewis Hamilton and Felipe Massa put McLaren and Ferrari at the top on the timing sheets at the first two sessions, it was the Red Bull team that clocked the fastest time in FP3. Sebastian Vettel, reigning world champion, put in a time of 1 min 24.824 secs in 18 laps of running during the practice session. Vettel was the only driver to have managed to break into the 1 minute 24 second barrier. Just behind him, was McLaren driver Jenson Button, who clocked 1 min 25.191 secs. Mark Webber clocked the third fastest timing with 1 min 25.203 secs. It wasn’t an easy time for the two Mercedes GP drivers, however, with Nico Rosberg clocking a time of 1 min 26.873 secs to slot in 8th in the timing charts. Seven-time world champion Michael Schumacher’s run of tough luck in practice continued – he clocked the 11th fastest time with 1 min 27.217. But who’ll line up where on the starting grid? We’ll only know that once qualifying is done.