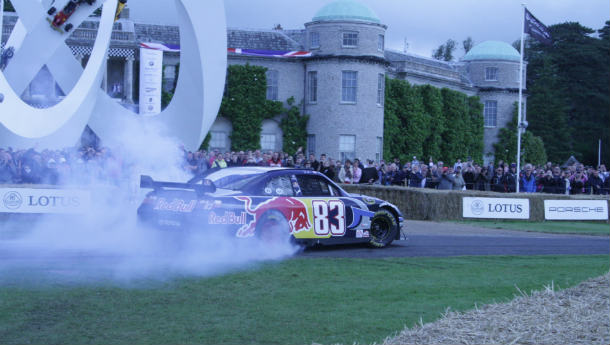 Stirling Moss passes by you in a golf kart, stops and then climbs the stairs to hit the other side of the track. He struggles, but finally gets in. In his eighties and still a very capable driver.

John McGuinness doesn't need much of an introduction and his riding capabilities, well can't be defined by a non-motorcyclist like me.

Crowds gather to watch the Supercar run and in the melee a BMW M6 convertible passes by with a familiar face waving to the mass of people. His name is Tiff Needell.

A crazy truck makes it grand entrance on the track and then does a whole bunch of tyre burnouts as the crowd goes wild. Rhys Millen couldn't have thought of a better entry, eh!

The car park is a rolling motor show by itself, what with E-Types jostling for space with Focus RS', BMW M3s and Ford Cortinas, 911s galore and the odd 458 struggling down the path that's become slushy due to the overnight rain. In between all of that is the McLaren camper and a stand for F1 enthusiasts to come and take a photograph with Lewis Hamilton.

A classic WRC goes up the hill, this time the mighty Audi Quattro S1 that's probably louder than a pair of R8s at full chat. Drumming up the crowds is Nick Mason, who is as much a pro as some of the rally drivers of their day.

Another Group B car, the Renault Maxi 5 Turbo spins into the picture, leaves pieces of burnt rubber, enthralls crowds and powers ahead. Jean Ragnotti, the famous rally driver from his era waves from his tiny window to the crowd, as if to suggest that more was to come.

Indeed there would be more. Later in the day, the scream of a 1.5-litre turbocharged Renault F1 car fills the Goodwood estate. The name tag on the flanks says Prost. I needn't say more.

Jenson Button waves out to the crowds on Saturday from his McLaren paddock, Kenny Roberts leaves the crowds in a frenzy on his race winning GP motorcycle. Jean Alesi too hits the track, but I'm too busy appreciating the Ferrari 250 GTO, the SWB and MM sharing space in the Cathedral Paddock with the Silk Cut Jaguars Le Mans cars, the Porsche 956s, the famous Peugeot 205 driven by Ari Vatanen at the 1987 Pikes Peak Hill Climb, a 1965 Ford GT40 while a pair of Lancia Martini cars from the 1980s peek out from the other end. Karun Chandhok turns out in one of the Silk Cut Jaguars, describing its insane power delivery; 'It wheelspins in second gear all the way up the hill!' A Bentley 4.5 litre develops a crowd, but it's the 1914 Sunbeam at the other end that catches my fancy. All because I can't believe that it has adjustable leaf springs. Back in the day!

There's so much more - V8 motorcycles, Kompressor motorcycles, Rossi's 2011 MotoGP Ducati, the sidecar motorcycles from IOM TT, six-wheeled F1 cars... phew! Goodwood, then. You need two pairs of eyes to catch all the action and make do with a single ear. The deafening roar of cars and motorcycles, combined with a Eurofighter Typhoon on afterburners will leave your ear(s) ringing for a long time to come. And your hair standing on their ends.