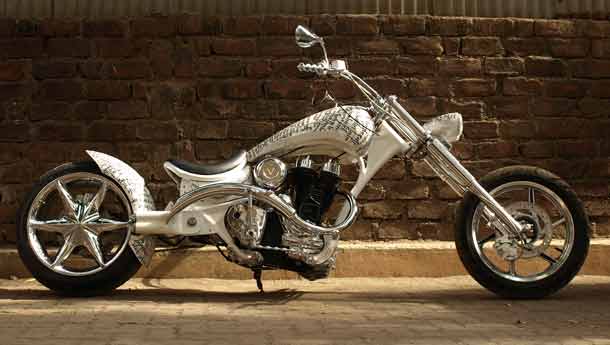 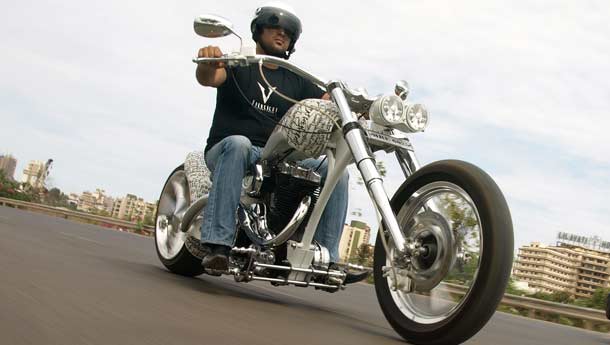 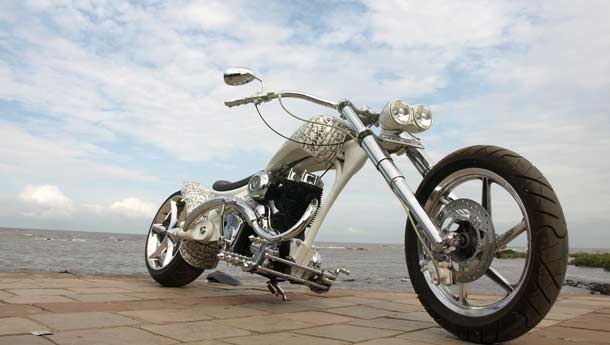 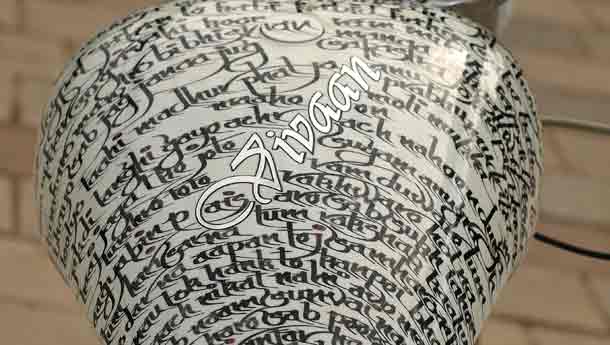 When a motorcycle has dimensions that list 36 inches in the spec sheet, it’s not hard to imagine it.

But three feet in width is something that leaves you thinking. It also leaves you with outstretched arms once you’re astride. Welcome aboard Vardenchi’s latest creation. This white behemoth which is still un-christened was something I spotted as Akshai hooked a three point U-ie in a crowded Bandra bylane. ‘Reckon you can shoot some photos of my motorcycle,’ Akshai hollered. Sure I said, Sunday morning is when the junta is asleep, I yelled back over the load thump of the er… <I>Mantra<I>. That’s what I decided to call her. Read on to find out why.

Come Sunday 8 am and the phone’s promptly ringing. It’s Akshai who’s calling to say he’s good to go. We set off on this little informal shoot/ ride (this wasn’t supposed to turn out to be a story) where Akshai’s telling me all about his upcoming plans to homologate a bike and start custom production and the like - his vision for Vardenchi - as we scour the area for a good backdrop to shoot <I>Mantra<I> against. Okay so here’s why I call her <I>Mantra<I> - the writing you see all over the tank is a chant, a mantra, that’s been painstakingly calligraphed in ink by Akshai’s mum who’s a brilliant artist herself. It’s since been lacquered over so the paint doesn’t run; so if you wanted to know what happens in the rain… there you go. Anyway back to the motorcycle. We parked her against the ocean only to have a sea of onlookers and guards surround the motorcycle and meddle in my peaceful Sunday morning activity.   I don’t blame them; the motorcycle is by no stretch of the meaning conspicuous. It’s long, wide and dazzlingly white. It’s not just a crowd puller, it hauls the masses and ensure they’re rapt in awe.

Whether it’s through the lens or just sitting gazing at this motorcycle, there are a few things that instantly draw your attention to it - the little pieces of metal machined into an art form, the gleaming chrome and the flowing body lines. This is a motorcycle that looks beautiful just sitting still. The <I>Mantra<I>’s got its own Vardenchi customised frame built around an Enfield 350 iron-block engine. The front suspension is the only other component that stays standard, albeit with longer fork tubes.The front headlight cast in aluminium houses two white halogen lights and is a simple yet innovative touch, while the rear sub frame, if you can call it that, is draped with the side panels and is effective to conceal the electricals. Function over form?  Or form over function? You decide…  But let me tell you that the frame shapes what is quite literally a saddle on the <I>Mantra<I>. A very comfortable one at that.

As you’d expect, there’s no need to swing a leg over this motorcycle, you can simply side step over this low slung work of art. Ground clearance on this one is low, about six inches I’d reckon but the swing arm’s got a three point mount to increase ride height just in case. Firing up the <I>Mantra<I> is quite simple, fold out the lever and heave. There’s no de-compressor lever so if you aren’t used to firing up a thumper it can sometimes take a bit. The wide handle bars won’t help the newbie either, but it’s very easy to adapt to after the first few times.

Once she’s lit up, just sit back, ease your feet forward, hang on to the wide bars and slot first, before you feel the exhaust note reverberate right under your leg as you pull away. The 350cc Bullet engine has ample amount of low-down torque which is essentially what a motorcycle like this needs. The ride is surprisingly comfortable, even over bumps, but one has to be mindful of the fact that a large speed breaker might cause some amount of hisses and sparks. I must say that I was prejudiced into thinking that a motorcycle with a rake this large would be as easy as riding an elephant to the office, but I must tell you that for most practical purposes the <I> Mantra<I> will not be a bother. Although don’t hold those three-point turns against me.

A lot has changed though on Akshai’s motorcycles since the last time I saw one of them. They’re not all perfect, but the key factor is that fit, finish and quality has increased tremendously. It’s a step forward in making these motorcycles a quality product and taking the custom motorcycle business forward. So when the old gentleman who caught a glimpse of the motorcycle sighed and wished if he could do that to his Tiger 100. Soon enough, said Akshai. A full-fledged custom shop like those chaps on the West Coast then, you think?