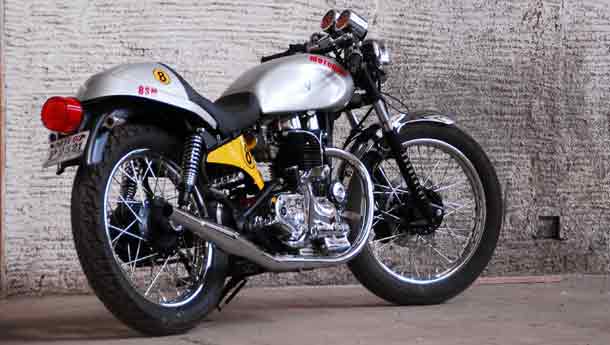 Akshai Varde loves his motorcycle. And when we say his, we mean, they're personal. Stock is not good enough. The 26-year old chucked a plush job with Jet Airways (having spent a year's worth of 21-hour days feeding his passion and his work schedule), to go full time into his first love, remoulding motorcycles to his will. We first met Akshai when we spotted his work in a newspaper and exclaimed, 'this should be in the mag!' And we did. A complete motorcycle freak from his earliest days, Akshai rides one of his choppers and is dreaming of building more and more and more...

You've seen more than a few of Vardenchi's spectacular choppers on these pages. But when we made the call, we didn't really know what we wanted. So we took the easy route out.

'Akshai, this is BSM. We'd like to commission a motorcycle to mark our eighth anniversary. We thought you'd be the right chap to build it.'
'Oh cool, what sort of bike do you want.'
'Er... Can we call you back?'
We took our time coming to our indecision and called him back
'Er, hi, we've decided on the bike...'
'And?'
'Akshai, we'd like you to build us a special motorcycle.'
'Yes, and?'
'Er... that's it. We'd like you to build us a special Vardenchi that you think embodies our magazine's spirit. You know, something that's us.'

With that rather vague design brief, the ever-ready Vardenchi machine was set into motion to create BSM's special. Having seen first-hand our love for sporty machines, Akshai knew from the start that a long, low and heavy chopper sort of thing wasn't on. 'Come on, a BSM chopper? That would be the day.' So it took a different path. Having surfed a whole bunch of Brit Bike sites, Akshai decided to re-interpret a Cafe Racer for the special. Of course, he didn't tell us this until later. But obviously, having built the ThunderClap, that would have worried us. Repetition, at BSM? Can you even imagine that?

The idea was sound, as it turns out though. The work started with a Bajaj Caliber tank. 'It's a really nice tank to start with when you're making a sporty bike. Which is why I've never actually used one!' said Akshai. 'However, once we put it on the Bullet chassis, we realised it was way too futuristic, way too angular for our purposes. So our metal worker, Mehboob, sat down and gently patted down the angles into a more rounded form. We kept the neat knee recesses and lost the edges off the tank. I think it worked perfectly.'

'The closer I looked at the cafe racers, the further I had to leave my chopper building experience and thumb rules behind. For instance, I had to chuck my normal four-foot handlebars in favour of a tiny, under-the-triple-tree clip-ons. That's very different from my usual customs. Initially, the sporty design was to end with a simple one-and-half seat with a racing hump. But the creative end of the team were divided over the seat hump. You can already see how that turned out, eh?' The seat hump was crafted from mild steel for the one-off prototype and has a simple snap-into-place mounting system. It neatly covers the 'hump' and when you are tucked all the way into the machine, chin on tank and all, the setup feels perfect. 'We did consider adding a little more detail to the hump, but the first time we put all the bits on the machine together, we realised that its bare-bones simplicity was part of its charm.'

With the tank, seat and hump sorted, Varde's team set to work on the chassis end. Stretching the chassis was out. That meant no reinforcements for the swingarm pivot, no single-sided swingarm and no monoshock either. Instead, Vardenchi went the traditional route, 'I thought wire wheels, twin shocks and a stock-looking swingarm would look better.' Actually, the swingarm is stretched out a little bit. Which brings a neat drag racer touch to the cafe racer. The long and low look is actually very flattering to the machine. It looks splendid. Having stretched the rear end out a bit, we added our custom triple clamps, but without the usual dramatic rake and bolted standard Bullet suspension on.'

Walking around the machine, we noted a fairly complex looking front brake. 'Oh, that's actually an Avenger brake that we adapted to the bike. It really works very well.' Oh? Why not a regular Bullet disc then? 'Er... We got a bit lazy. We had the Avenger bit lying in a box on the shelf, and we would have had to go out and buy a Bullet disc...' Ah so.

'We really did get stuck trying to decide on how to package the area below the seat, though. We definitely didn't want to do the standard Bullet boxes. And we also didn't want the Harley-oil tank style wraparound piece either. The solution came in the form of a discarded metal bit from a previous bike. It was shaped loosely like an Eagle's spread out wing, and when we wrapped it around the space, the cut-outs made the bike look really light and fast. So we installed it and called it good.'

'Since you guys only gave me the slightest of design briefs, the paintjob was one of the most difficult of the jobs we had with the bike. BSM's colours are usually white, blue and red, but I didn't think it would really suit this style of machine. Back in the day, cafe racers were either silver or black. Or at least that's what I saw on the Net. What to do?' Once we released Akshai and his crew from the grasp of the colour requirement, he decided on silver. 'It was just right. We chose a silver-flake-ish silver paint coat for most bits, with a bright yellow for the 'sidepanel.' We added the '8' logos in the same yellow and it looked brilliant. I was actually looking at my first non-chopper custom. Hey, this could be a second line of products...'

Till this point, no one at BSM had actually seen anything of the bikes. Every time we asked Akshai Varde to send us pics from the in-progress build, he said, 'Ya, no problem. I'll send them soon, okay?' And then promptly forgot about that. So when he rolled in with the silver-and-yellow beauty, we were faced with two tasks. One, stop staring at the gorgeous custom. And two, we needed to christen it. And of course, we immediately did neither and took it out for a spin instead. Aye, it's lovely. Thumping around all over the place, the latest BSM Special is a supremely comfortable motorcycle. Where ThunderClap gave us a few aches and pains, the Vardenchi ThunderStrike will allow you to stay in the saddle for as long as you like. Yup, ThunderStrike.

The slightly altered 'rocket' pipe is authoritative, but unlikely to break any decibel records and gives the ThunderStrike engine the same dramatic voice as the chap who does all the film trailers. For the moment, the engine is stock apart from the in-the-open air filter, but that could change. The powertrain is completed by a secondary belt drive, using Vardenchi's own custom-made belts and pulleys. 'Then all we did was add the detail. The one-off rearset pegs, shorty shifter, the orange-lensed meters and the large chrome headlamp and my favourite, the bicycle pedal kick start.'

So Akshai, how does the ThunderStrike embody the spirit of BSM, then? 'I believe that BSM is the most 'real' magazine. It's a classic. Which is the reason why I went looking for inspiration in classic motorcycling. And came up with the cafe racer. 8 is the purest motorcycle we have built so far. It has no aesthetic bullsh*t. It's clear, it's gorgeous, it's honest, it's taut and it's crisp. And doesn't that describe the magazine?'