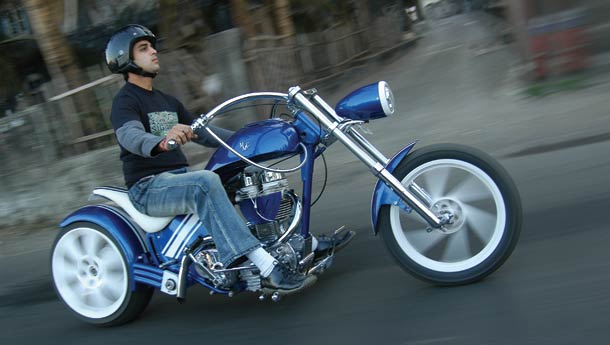 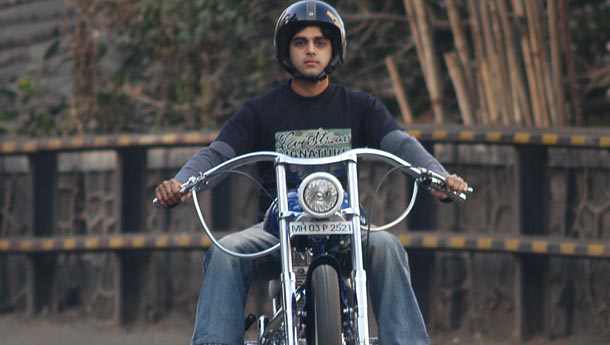 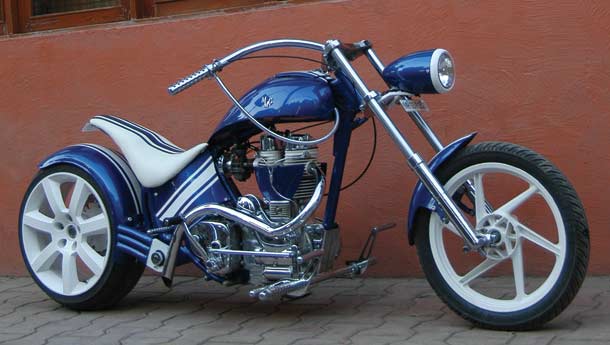 The quantity of sound is not strained,’ I joked to Pablo. He didn’t hear me. But then how could he? The man with the super shutter finger and sensitive ears was standing with the aforementioned digit buried up to the third knuckle in his ear.

If this were a cartoon, you’d see a black and white panel with Pablo and me mouthing empty talk bubbles to each other, while a blue blur tore up the monochromatic background. A large scraggly text screaming ‘ROARRR!!!!!’ would be following the blur around like a happy puppy dog.

The source of the ambient, all-pervasive noise in the background is the spanking new MMC Sportster that Akshai is riding up and down the strip. A machine so gorgeous that neither Pablo nor I ventured a word of comment for the first few minutes. Or maybe we did, it was too loud to tell.

You already know that Ash and Akshai make up the MMC, and that Akshai is the R&D end of the operation. So loudness would be his baby, right? ‘We don’t build choppers to smash lap records. They’re to be ridden slowly, enjoying a breeze, not a gale, and gathering turning necks, slackened jaws. The loudness of the exhaust is a big part of it.’ he says.

But the imperative engine note is only the tip of one very cool iceberg. For those of you who remember the twin MMC choppers we featured earlier, this is the next big step. The blue one, called Sportster (model name), Viper (nickname) to friends,  has come a really long way.
MMC wanted to do something outside the wide-tank-classic and simple-cruiser-chopper formats. So they decided to give their normal 30-acre tanks a pass and went for a neater, sleeker, slimmer and consequently ‘faster’ looking bike.

The Viper’s shapely tank looks lithe in a fashionable sort of way, with the Dodge Viper supplying the inspiration for the triple stripes. The fuel tank cap is a dead give-away though. And you should spot it immediately... you’ve seen millions of them... yes, the Splendor. From that beginning, it has been lovingly stretched, shaped and beaten into shape and then painted over.   The same athletic theme carries on in the slim and long seat. Done in tasteful (and maintenance heavy) white with blue stripes for contrast, the thin cushion sits on a slim subframe that comes to a Buell Lightning-style dramatic mid-air end in a tiny pillion pad with an even tinier rear number plate. There currently is no tail lamp, but Akshai’s work desk is littered with small oddly-shaped LED bits, so a almost invisible until needed tail lamp is underway.

With the light and sleek theme, the frame had to evolve as well. The MMC team of designers and machinists have hacked it down to a cruiser-friendly low and long shape. The engine mounted is Akshai’s own ‘70s 349cc Bullet motor. Which is a place holder in every sense of the word. To illustrate, if you looked under the near blue plates cupping the white coloured block, you’d see broken fins. Akshai laughs, ‘It’s a really old engine, man. I only used it to demonstrate the concept. Customers will receive newer engines, fins and all.’

Into the stretching chassis, MMC added a gorgeous single sided swingarm. The team is obviously proud of it, and they should be. The pivot plates and axle mount are all made in inch-thick mild steel, with a trio of stacked and welded structural grade 12mm pipes. The pipes are slotted into er... slots at the ends and welded carefully for strength. It looks gorgeous with the cross-member supporting the monoshock mount.

With a six foot wheelbase, MMC added in their innovative twin chain drive system. However, this time MMC neatly avoided the visual mess of the two chains. Usually, you can see the gearbox sprocket, rear wheel sprocket and the length of chain. The twin chain puts a second set of sprockets bang in the middle and with chains connecting the yawning gap between the engine and the rear wheel. MMC hid the primary chain behind the faux oil tank section, and you only see the secondary chain connecting to the RD350 sprocket on the rear axle.

The faux oil tank is actually not a normal MMC item, they prefer to have the shock and all in full view. In the Viper, it allows them to clean up the look by stuffing the battery, coil, monoshock and a bunch of wiring. It is one of the reasons why the Viper looks so neat. Although I personally am still not convinced about the diagonal continuation of the triple stripe.

At the end of the curving swingarm is an imposing, imported alloy wheel in white wearing a rubber band thin 200-section Dunlop tubeless tyre. The width alone adds to the impression of Viper muscle and the minimalist, almost Buell-style rear end of the machine looks brilliant.
At the front, you can see MMC’s standard custom control levers, pegs in resplendent chrome. The custom triple plates return with a new sort of handlebar, which is bolted on neatly to the top plate. A plastic front mudguard (final customer bikes get metal), powder-coated Pulsar front alloy, standard MRF Nylogrip 2.75-17 front tyre and the complete lack of front brakes completes the bike.   It is quite an attention hogger. Akshai fielded all kinds of questions during the morning including, ‘Sportsbike? Nice.’ On the move the impression of the rear wheel floating and the glossy, bright but not flashy blue come together very very well. But there is more to the Viper than the MMC bikes we featured earlier.

You see, the Sportster line is up for sale. Ash and Akshai intend to make and sell twenty-five of the things. Number one, Viper, may have Akshai’s own engine, but later bikes will get updated motors and you will have the option of playing with custom grips, levers and so forth. Got cash?

Finally, it was my turn to become the eye of the storm and chug lazily (and loudly) down the road. With the very first roar, the Viper converted the stretch into the red carpet, and I could almost imagine the flashbulbs going off, the paparazzi going mad and celebrity-hungry fans pointing, ‘Look cool bike, er... grubby rider...’

More to the point, the Sportster is a very realistic bike. Ash’s Big Yellow machine was quite heavy and while Red was lighter, it seemed to wander about a bit. The Viper just goes where it is pointed with not even a hint of instability. The 200-section at the rear does tend to transmit an alarming amount of feedback but the flipside is that the Viper corners quite easily with some of the floppy handling expected of a chopper held back somewhat. You still notice the weight at the handlebar but then again that’s missing the point of riding or rather savouring this thing. Having said that, it is easily the most rideable of choppers I’ve experienced and probably the handsomest.