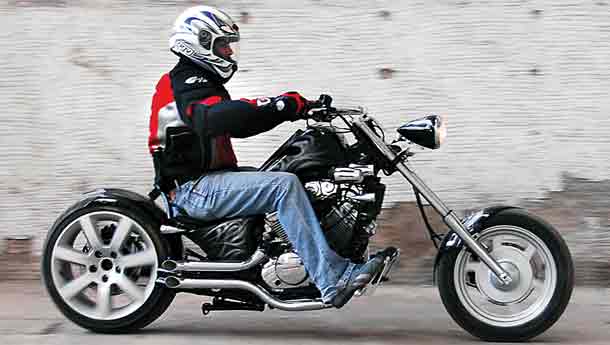 Welcome to Half Past News. I’m the anchor. Not the thing that drags you down, mind, but the chap who strings the show together. Today, our top story is the latest all-new motorcycle to hit the Indian market, which is based on the last generation all-new motorcycle but with new stickering. But first, we have a
report on the newest of Vardenchi’s creations, the Silver Smoke. We’ll go over to our reporter Joshua, who is at the scene. Joshua?

‘It was an unusual project for us, for sure. But the chap who now owns the SS wanted it and we thought it would be interesting. We wanted the SS to be a proper chopper. As in classic OCC school, with the raised front end, not much rake and lots of detail.’

‘Thanks, Akshai. As you can see, viewers, the motorcycle looks very compact and er... filled in. The V-twin looks just right in the setup and as you’ve heard it does have a lot of detail work. For instance, the tank appears to be a rectangular job, but in fact has a lot of detail in it, including the neat central ridge. And then there is the airbrushing. They wanted a diffused ‘smoke in the night’ sort of flame job, and the boys just went out and gave a hundred and ten per cent. How was it to work... er... are we still on?’

‘Joshua, we can hear you. What’s the situation there?’
‘... an Aquila, we learnt, has a lot more electrical wiring and components running about, so packaging the SS was quite a task. We had fun and we learnt a lot. Plus, there were our usual trademark details, like the single-sided swingarm, the belt drive and so on.’

‘So ladies and gentlemen, that was the Vardenchi Silver Smoke. Just the sort of bike you want to be going to the nightclub on. Back to the studio. This is Joshua Crasto for Half Past News.’

‘Thanks, Joshua. I myself was quite excited about the bike, so I went out later, without the camera crew, to see if I couldn’t take a spin on it. I could. The tall front end means that the bike basically wants to go on running in a straight line. But viewers, it doesn’t really want to go around corners.’

‘And now, turn up the volume on your television and listen to the sound. Isn’t that just great? Instead of the loud thump of the usual Vardenchi Bullet-Choppers, this one sounds glorious. The twin pipes add a neat design element and a great thrumming soundtrack. It also feels quite a bit faster in a straight line than any Bullet chopper I’ve ridden.’‘The bike feels extremely comfortable to ride, except for a bit of extra bounce (brought to you by Silk & Shine Shampoo) in its step. Vardenchi says the bike cost the owner about Rs 2 lakh to customise.

‘When we return, we’ll look at the all-new motorcycle, and the latest Indian debacle from the world of sport. That’s coming up next, after these messages.’