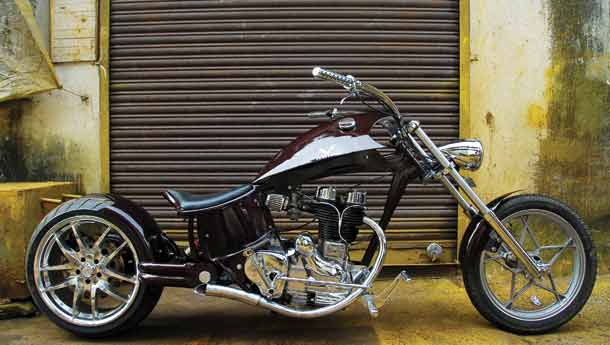 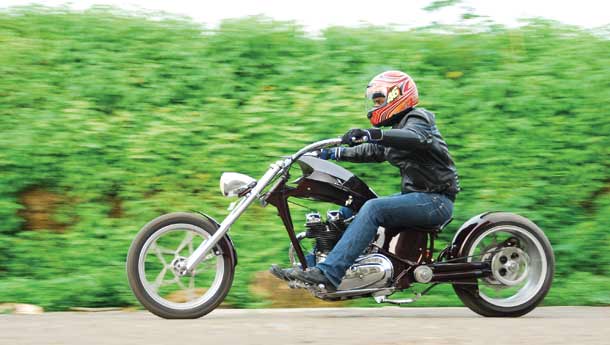 ‘Hi! It’s been a while, hasn’t it? The news is we have finally got our belt drive bikes up and running... would you like to take one for a spin?’ Big deal, eh? So the chaps at Vardenchi (formerly Mumbai Motorcycle Company) have built themselves a motorcycle that runs a cool belt, rather than a greasy chain. So what? Well, this here chopper is what.

Built as a demonstrator for the design and manufacturing skills of the firm, this mean one was built on a schedule. In two days flat. It looks imposing, and it is supposed to. Vardenchi got a chance to show off some their bikes at a popular Mumbai mall, and the Infinity was built to stop shoppers in their tracks. And that it does, don’t you agree?

As is the norm with Choppers, we have to start with the meat of the book– styling. The swoopy tank lifts clear of the frame (as opposed to the sportster which hugs it) and a sharply raised central crown ends in a swooping wedge that ends above the flat and ultra-wide handlebar. The central wedge is flanked by two others, and that theme repeats all over the motorcycle, including the seat pan and fender edges.

To save time, the side panels are typical Vardenchi bits, using a curved plane with just a couple of bolts to hide most of the motorcycle’s wiring. Add in an Enfield engine (this one uses one of Akshai’s old ones) and a loud, almost unmuffled pipe and you have it.

Since the last time we featured one of these bikes, the company has gained experience, and now uses its own castings for many bits. This is a definite move on from the time when it would have adapted a replacement market spare part for its purposes. Among the style bits that we really like on the bike – tank aside – is the centred rear disc brake on the chromed rear wheel. Akshai intends to replace the current front wheel with a more with-it design at some point.

Now to the belt drive. When it was first conceived, the Infinity used a Tata Sumo timing belt to turn the rear wheel. Elephant-memoried readers will remember the twin chain system – the normal chain turns a (hidden) sprocket mounted on the swingarm pivot. And another longer chain drove the actual rear sprocket. Vardenchi upgraded the driveline by replacing the second chain with a belt. They fashioned their own all-chromed belt ‘sprockets’ and it all worked, after a fashion. The Tata Sumo belt is pretty sturdy, but the lack of a belt tensioner meant that Vardenchi had to run the belt extremely tight, which meant it could snap under duress.

Later bikes feature wider, stronger belts as well as tensioners, but the Infinity still runs the old system. This is why I got a strange sensation that someone was tapping my leather jacket at 30 kph. Hey, not even Pity Usha runs that fast. Then I lost all drive and stopped.

Akshai’s ever-present smile wavered not a bit despite being faced with pushing the hefty chopper a half kilometre back to his garage. ‘I’ve been waiting for the belt to break. Now that you’ve done it, I’ll finally upgrade the Infinity to the new belt spec.’ Er… escaped lightly, there, eh?

The newer belts are almost one and half times as wide as the one I snapped, and incorporate a proper belt tensioner system. Plus they’re Japanese. Akshai says he has tried everything short of nuking the bike to see if the maintenance free belt drive would snap.No luck so far.

As is usual, I slid into the bike with much trepidation. It was like transferring from a boat to an aircraft carrier. I’d just gotten off our long term Avenger (mooched off Pablo – I can’t sit pillion) and what a world of difference! Where the Avenger uses a neat, narrow handlebar, the Infinity’s grips are almost two and half feet clear of the central ridge of the tank, on each side. This means that a five-foot-ten-and-a-bit rider like me can only just reach both grips and both for’ard-set pegs at the same time. Vardenchi mechanic Ratan smiled and added that he hadn’t taken a single ride on this bike, because despite many contortions, he could only reach one of the four control surfaces of the bike.

I didn’t even attempt to start it, though. Old Bullet engines and my kneecaps have never gotten along, and thankfully, so far I’m winning that war – by not fighting it, heh heh. Akshai, thankfully, has no such problems, and he started it up and handed the bike over. I snicked into first (positive shift, if a bit long on the throw) and rolled off on a familiar wave of torque. The low-slung position and the monoshock mount allow you some suspension but it isn’t wise to test it. Carefully avoiding all the bumpy bits, I wobbled around until I got used to the feel of the bike.

At low speeds, the Infinity is not for the faint of heart, or for the short on space. It feels wayward and more than a bit unwieldy (the Honda Valkyrie I rode years ago seemed less of a handful). It tends to slew around quite a bit. However, it’s just a question of smart clutch work, and searching hard for a place where you can get back on a steady throttle.

Then the Vardenchi goes from oh-bugger-it to bloody-wonderful in a flash. Once speeds rise, the 8½ foot length of the motorcycle lends an immense stability to the package. It feels like it’ll never waver and this is a lovely feeling down the open road. However, the same feeling persists in corners, which isn’t quite as lovely. After a fashion, you can hustle the Infinity through corners without a care and make the best of the limited cornering clearance and all. You’ll even smile at its efforts to go around the corners. But you will also be clear that the bike (like all choppers, I think) was built to go straight. And keep going. Ad infinitum.
To find out more about the Vardenchi Infinity, or if you want a custom chopper of your own,call Akshai Varde at +91-98208-01998. Vardenchi also makes quick fit custom kits ( hey, that rhymes) for your bike. More on
those soon.