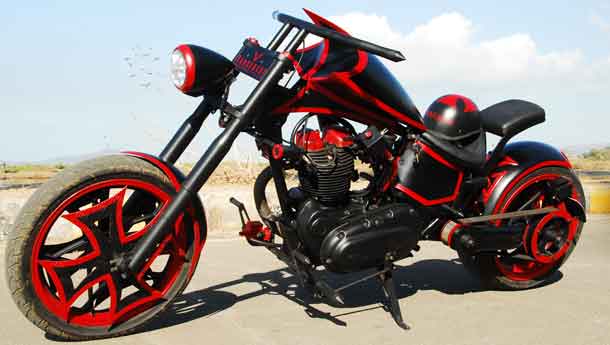 You’ve seen many a Vardenchi on these pages, but I’m sure you’ve seen none quite like this one. You see, this bike was a hell of a lot more personal than most of the choppers that have gone before it. This owner, chose to spend days on end in the shop, sitting with his machine and the men giving it shape and buying parts for it abroad. The result is a bike that has more Maltese crosses on it than you would ever like to see, and an aggressive red and matte black paint scheme that really stands out. And that’s just from a distance.

Akshai Varde broke lots of new ground with the El Toro Del Diablo, the official name of the bike, again courtesy of the owner, who is also receiving a matched beanie helmet that says Diablo on the back. He says, ‘We’ve always wanted to clean up the look further, and the wiring was always a pain to deal with. We have taken a big step in that direction with our new internal wired throttle. We tried importing US DOT-approved ones from the US, but would you pay Rs 12,000 for something you can only twist?’

So Vardenchi made their own throttle and as Akshai says, ‘It’s a bit heavier than normal throttles, but it works quite well otherwise.’ To maintain the clean look, the clutch and electrical switches were relocated to a dice cube on the left of the bike. The number spots glow in the night and the cube hosts the start button (the base model is a brand-new Electra 5S) and toggles for the lights. The clutch lever is via a decomp lever mounted on the stalk which hosts the cube. Rolling off is a bit odd in feel because you have one hand between your legs and the other on the hard throttle, but as Akshai demonstrated, it isn’t that hard to get used to, and is a royal pain in the behind only in heavy, stop-go traffic.

A lot of the rest of the machine is pure Vardenchi, with evolutionary details like the larger dia piping in the single-sided swingarm, custom drive belts, genuine NASCAR spec heat shielding (owner-procured from the US). What is completely new are the Maltese cross spinners, a Vardenchi first. As Akshai says, ‘The spinners weren’t hard to create, but we didn’t expect them to be such a hit. Since people have seen this build in the garage, spinners seem to be high on the can-it-be-done list. The owner wanted no ‘chrome colour’ on the bike, so every part was either powder-coated or painted to spectacular effect.’

The El Toro Del Diablo is another spectacular Bullet-based chopper from the house of Vardenchi. Akshai says, ‘Next, we’re trying to get our own CNC billet wheels, you know I’ve been having trouble matching front and rear wheel designs... If we can pull the billet wheels off another cog will fall into place.’
Want one? Vardenchi.com