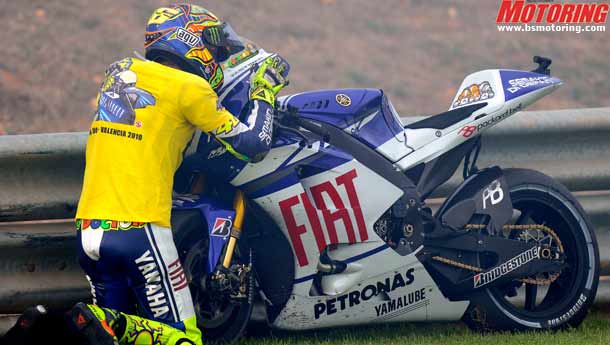 Valentino Rossi's switch to Yamaha back in 2004 stunned everyone, including Yamaha! Rossi had three consecutive championship victories with Honda under his belt, and his consistency and performance absolutely overshadowed everyone else on the grid. Yamaha's 2004 YZR-M1 was nowhere close to Honda's brilliant RC2IIV, but Rossi proved himself by securing pole position on his very first outing with the M1, and eventually winning two back-to-back MotoGP titles.

The '06 and '07 titles went to Hayden (Honda) and Stoner (Ducati) respectively, but Vale fought back, winning the '08 and '09 titles, the latter being one of his most exciting seasons. 2010 saw Vale in hard times, with an increasingly dominant team mate in the form of Lorenzo, and a massive injury which saw him out of action for four races. He made an unpredictably early comeback, at the German GP, and went right back into the championship battle. Rossi finished third in both, the  '10 championship, and his last race with Yamaha.

His '11 switch to Ducati has enthused VR fans all over, and we can't think of anything better than a flourescent yellow '46' on a red hot Ducati!