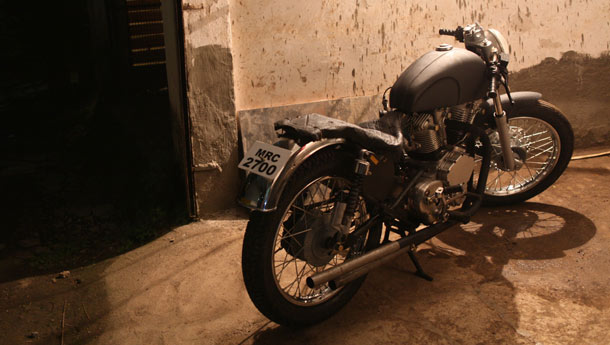 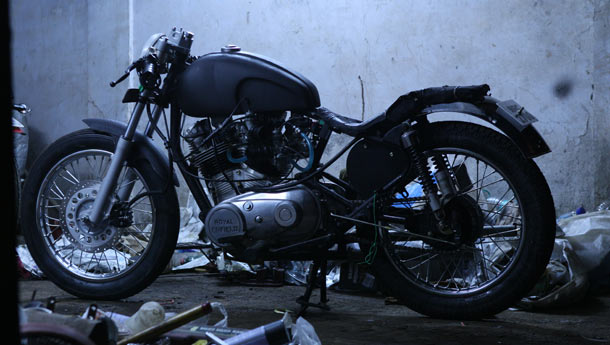 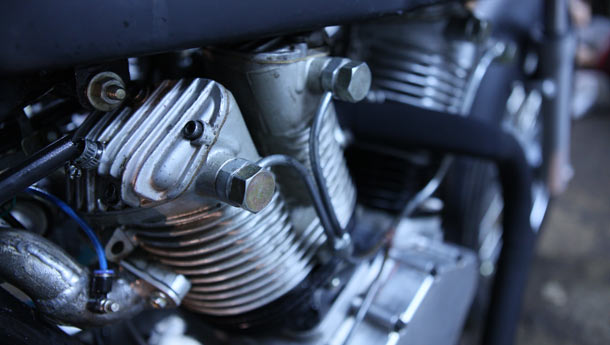 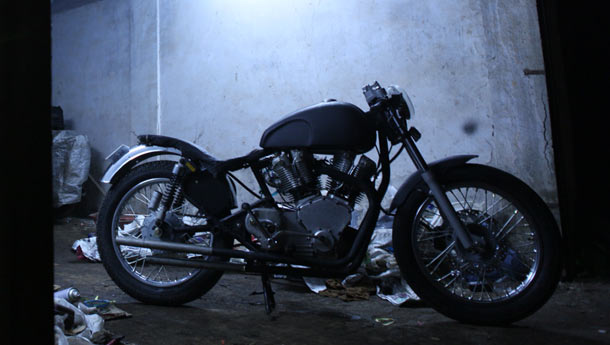 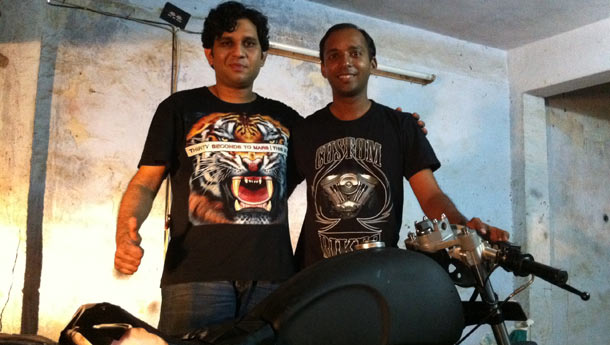 A battery of ack ack guns going off an inch away from my ears would probably sound like a baby’s gurgles in comparison to this duo of straight-through pipes. The din is ricocheting off the garage walls, causing my eardrums to ring and my eyes to water.

The compression ratio of 8.5:1 seems measly at first, but then again, in this case you need to multiply that figure by two. I can stand on the kick starter without it even moving an inch. Yes, all 95 kg of me. It makes do without a decompressor but there’s method to this madness, it appears. You need to nudge one of the pistons just before top dead centre of its stroke, the duo of carbs hissing as they snort in some air. Then, give it a firm kick with a full follow through. The odds are even - either it starts right up or it spits back, sending you home with a busted boot. Or worse.

It’s taken Dean Fernandes and Anand Bhalerao four and a half long years of sweat, blood, tears and lots of hard earned money to get this far. Many a time, progress hit a brick wall but these guys manned up and just bludgeoned their way through. A running V-twin hell-raising machine born out of the fertile imagination of two diehard motorheads. A powerplant whose innards once started off as mere drawings on blank sheets of paper.

It’s well past midnight and I swing my legs over this metallic beast, brimming with excitement and plenty of trepidation. This is history in the making – a homemade wet-sumped 700cc V-twin running a duo of Royal Enfield AVL 350 heads and blocks placed at an angle of 45 degrees to each other. Sure, you might have heard of the wonderful efforts of Norcroft Engineering or the Carberry V-twin or even the Musket; but this has certainly never been done before in this part of the world.

The shifter on the old Albion gearbox is coaxed into first and the shindig is on the roll. I pull on the throttle and seconds later, the lights in the slumbering homes of a little fishing village in Bandra come on, their inhabitants awakened by the rumble of an approaching thunderstorm.

The bike lunges forward, and then throwing caution to the wind, I wring that twist grip as much as it can go. The motor digs in at first, and then suddenly, it becomes apparent that I have just opened the flood gates of Armageddon.

Now, I have ridden some solid Royal Enfields in my time but none like this. Hotted-up Enfields are great, but this is something else. Modern sportsbikes put down their power in a clean, almost surgical way – sharp, linear and precise. But with this vessel of dementia, wave after wave of sheer torque pounds down onto the rear wheel, taxing that stock Bullet rubber to its limit. It’s like cutting through a log with a sledgehammer. Whack it, thrash it, pummel it - that’s how this thing makes its motive power.

Anand and Dean reckon that the motor is good for about 50 ponies. But it definitely feels like much, much more. The rear tyre breaks traction every time my right hand flicks the throttle, sending the tail end sideways. The revs are swiftly climbing and I can hear those big VM 28 Mikuni carbs gulping in air at an almost insatiable rate, their mouths sucking at the legs of my jeans, almost as if trying to pull me into the violent mosh pit contained within those two combustion chambers. The push rods and rocker arms are clattering away as they open their respective valves to feed this monster and dispel its proceeds. Power keeps flooding in, there’s absolutely no letting up. And might I mention, ladies and gentlemen, we are only in first gear.

Never before have I commanded such an appetite for destruction from an Enfield, and I am going crazy with the power that I summon. You might have heard the phrase ‘to pull like a freight train’ a hundred times, but it feels like that was coined just for this motorcycle alone.

There is no subtlety with this apocalypse on two wheels, no siree. It’s boisterous and brash and uncouth and everything a modern roadbike can never be.  Mothers cover the ears of their kids, men stop and point and lesser motorcycles run for cover. It is excessive in every way, rough around the edges and thoroughly intimidating. With every passing second I’m on this motorcycle, it feels like my last and I absolutely love it!

I must admit that I never got around to hitting the topmost cog in the 4-speed box, but who can blame me, for I was blissfully exploring the expanse of the power band that this motor had to offer. And by George, it seemed endless. This is superlative motorcycling in every sense.

Not ones to let go of the details, Anand and Dean set out to design the engine in such a way that fitting it onto a stock Bullet frame would require the least amount of alterations possible. The result is this – the only part of the stock frame that needed tweaking was the single downtube leading from the headstock to the engine, which incidentally acts as a stressed member, just like the production bike. The motor is extremely compact and sits rather low, providing a much lower centre of gravity.

This has provided the bike with surprising agility around corners, despite the OEM Bullet 19-inch tyres. Drop a gear, track your intended course through a kink, gently throttle in and that’s about it. Not fiddling with the rake or trail has also endowed this monstrosity (and I mean that as a compliment) with the neutral handling of the stock Bullet, which is a good thing. This was meant as an everyday ride, and no, I’m not making that up. These lads are bloody mental!

Ingenuity abounds on this motorcycle. An oil pump, borrowed from a car, circulates lubricant through the motor and ultimately, some of it is sent into an improvised medicine bottle that acts like a catch tank, which is then recirculated into the sump. The solutions are so simple but that’s what great engineering is all about.

I can safely assume that by now you want your own two-wheeled slice of Armageddon. But the only mechanical aptitude you possess is the ability to dial your mechanic’s phone number. There’s good news for you, then, as Anand and Dean intend to put this ogre into production, complete with a proprietary frame, beefed up clutch plates and the like. It will take some time for them to accomplish this, but judging from what I have seen, these two certainly have the capability to do the impossible.

This is the Royal Enfield that Royal Enfield never made, but should have. Instead of sitting around complaining and waiting for the company to introduce an Enfield twin, these blokes went ahead and built one for themselves. And yes, if there ever was an Enfield befitting the hallowed line, ‘Made like a gun, goes like a Bullet’, this one definitely is it!