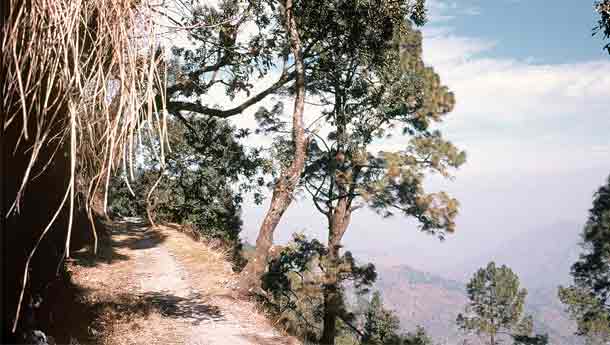 I think I’ve said this before, but if you’ve seen one hill station in India, you’ve as near as dammit seen them all. They’ve usually been discovered and set up by the British (apart from the Yankee exception of Kodaikanal), who got intensely hot under the collar under the Indian sun and rushed off into the hills looking for places to refrigerate. Why they didn’t simply stop wearing woollen greatcoats in summer is beyond me, but that’s probably a PhD’s worth of subject matter right there. In any case, you know what they say about mad dogs and Englishmen.

Most hill stations will have lakes of varying sizes, several ‘View Points’, some old Brit cottages, a church or three, a central bus station and a dizzying number of shops selling eucalyptus oil... among other commonalities. This being the case, you have to ask yourself (as I often do) why you would take the trouble to go to yet another hill station. I mean, haven’t you seen it all before? The answer, quite simply, is because it’s there, like Everest. Besides, I like hill stations rather a lot – they tend to be quite cheerful and you always find a little corner that nobody else goes to. So, with that explanation serving as a reason of sorts, I decided to notch up another one on my arm.

Lansdowne, where I was going, is tucked away in Uttaranchal, a state that is especially fecund when it comes to beautiful hills. I had never heard of the place, to be honest, and only read about it in passing while glancing through an unrelated travel piece. Something clicked, and not much time had elapsed when I picked up my ride in Delhi and headed for the hills, as it were. Getting out of Delhi as quickly as I could (always a welcome event, with due apologies to denizens of the capital), I zipped my way to Kotdwar, the last town on relatively flat terrain before you start the climb to Lansdowne. Now, in my limited experience, you can form a pretty good impression about a hill town from the drive leading to it. Potholes, lots of traffic and shops lining the roads? Expect a slightly or totally grotty place full of tourists, with the number of hotels most likely outnumbering the actual number of visitors. The approach to Lansdowne was, however, extremely encouraging – I scarcely saw another vehicle either approach or overtake, the road was a delight to drive on and all that lined it on either side were trees and great views. ‘Here we go’, I thought.Sure enough, by the time I turned into the little town, I was feeling very chipper. It was a beautiful day, I seemed to be the only outsider in town and from what I could see, Lansdowne was the cleanest little hill town I had ever been to. This wasn’t a surprising fact, considering that the army has the run of the place. The legendary Garhwal Rifles has its headquarters here and, as in most cantonments, the boys in uniform keep the place spic and span.  The town is named after Sir Henry Charles Keith Petty-Fitzmaurice, 5th Marquess of Lansdowne, 6th Earl of Kerry and Viceroy of India from 1888 to 1894. Petty-Fitzmaurice?? I’ve heard of stupid double-barrelled names, but this one takes the cake. Anyway, luckily they just called the place Lansdowne, so visitors don’t have to spend their entire sojourn in the town just reciting the fellow’s name and CV.   Bags deposited at the extremely pleasant GMVN guest house, I went off to see what the place had to offer. Now, it may have been almost devoid of tourists, but the place was still a hill station, so there was the obligatory lake – a fairly recent development, judging from the building work still going on around it. It was in fact so small it should actually qualify as a middling-level pond, because a proper lake would probably have been larger than the entire town. Still, it had some pleasant grassy knolls nearby, perfect for settling down with a picnic basket, and the water was very clean, so it wasn’t a bad place to be. I loitered around for a bit, annoying some geese and ducks, and then shoved off.

I drove around aimlessly for a while, stopping every now and then to take pictures of this and that or to explore little shady lanes, of which there were quite a few. The roads in the town were excellently maintained, but the problem was that all of them looked like they led to interesting places. This being a cantonment, I didn’t want to go wandering off down some inviting alley only to find that I had trespassed on army territory and all the Garhwal Rifles were being pointed at me. I thus played it safe and went to have a look at St Mary’s Church, on the recommendation of a friendly passerby (passersby tend to be uniformly friendly in these parts). It was a very nice church, as churches go, with lovely stained-glass windows and a most tranquil mien. Further up thesame road was the interestingly named Tip ‘n’ Top, formerly Tiffin Top, which had… well, nothing of much interest, really. By this time, I had decided that it might be best to call a halt to the day’s proceedings, since I would probably have nothing to do the following day if I kept at it.

The following morning, I had a chat with the guest house manager, a most well-informed gentleman. ‘See, Lansdowne has been, is and will always be about the army’, he said. ‘The first battalion of the Garhwal Rifles moved here from Almora in 1887, so a mix of cultures took place between the Garhwalis and the Kumaonis from Almora. A further mix took place when all sorts of traders – Marwaris, Christians, Muslims, Gurkhas and so on – moved here in order to cash in on the cantonment trade. Since then, Lansdowne has always had an open, tolerant culture. For example, both Sunnis and Shias worship in the same mosque here.’ ‘What sort of influence has the army had on everyday life?’ I asked. ‘Oh, it’s all pervasive. Most youth from here and surrounding areas join up, as it’s the major source of employment. Besides that, the army has imbued a sense of pride and discipline into the whole town, which you will not find anywhere else.’ This really was true; I had tried to put a finger on exactly what it was about Lansdowne that was unique, and the manager had provided the answer. ‘Why don’t you have a look at the army museum? It’ll give you a good idea about both the town and the Rifles’ history.’ I usually never need a second invitation to go and see a museum, so I was off almost as soon as he had made the suggestion.

It really was a fine old place, too. Immaculately maintained and sensibly laid out, it was a real storehouse of information. I’m normally not that big on military history, but even I had to admit that the chaps in the Rifles were something else. They had seen action in every theatre of combat right from WW I, serving with great distinction in each. The first Indian recipient of the Victoria Cross, Naik Darwan Singh Negi, was from the Rifles, and the unit had won countless other such awards. They were brilliant mountaineers, and had climbed every peak of note in the sub-continent, some more than once. During the early years of the Rifles’ Lansdowne days, two officers had decided to trek from there to Russia. Russia! They did it, too – that’s how hardy they were. The museum also had the usual (but very interesting) assortment of weapons, uniforms and marching-band instruments, and all told it was well worth the couple of hours I spent there.   At a loose end afterwards, I took a short walk over to the imaginatively named Snow View. Most places like this in other hill stations would have been overflowing with tourists and peanut shells, but here I was the sole punter. The view of the western Himalayas was superb (when have the Himalayas ever been less than superb?), and I felt a hot tea coming on. Settling down with Frederick Forsyth and a thermos (kindly loaned to me by the guest house), I poured myself a glass and took a satisfying sip. Another journey, another hill station – but probably the best one yet.

Lansdowne is conveniently situated about 245 km from Delhi, via Meerut, Najibabad and Kotdwar. I highly recommend you make the trip, for it’s the nicest hill station I’ve been to so far. It’s small, cosy, friendly, clean and relaxing – what more do you want? Considering its size, it’s not likely to throw up much by way of entertainment, but that’s missing the point; you go to Lansdowne to not do anything at all. Go for refreshing walks (take Lover’s Lane next to Snow View, it’s fabulous), pack a picnic hamper, sit under a tree and read, join in the occasional cricket match, eat plenty of gigantic alu parathas in the marketplace and generally recharge your batteries. Outside of town, a brilliant trip is to the Tarkeshwar Mahadev temple. About 35 km away and a very nice drive, this Shiv temple is considered to be one of the ancient Siddhapeetas and its location is simply gorgeous. Right in the middle of a thick forest of pine and oak, it’s like something out of the Shire in Lord Of The Rings. You don’t have to be religiously inclined to be moved by the sheer beauty of the place, I can tell you.

In Lansdowne, the choice of hotels is limited and with good reason – the army strictly controls construction in the town, bless their cotton socks. The GMVN Tourist Rest House (Ph: 01386-262509, Rs 350 onwards, book on www.gmvnl.com) is the best budget option, with clean, large rooms and a decent kitchen serving up simple, tasty grub. The Fairydale Hotel (Ph: 01386-262599, Rs 900 onwards) has nice old cottages and a good restaurant as well.