Utility vehicles are back and with a bang. After months of negative to flat growth, the domestic utility vehicle (UV) segment has started growing at a high double-digit rate, surpassing growth in the passenger cars segment. The UV market has been fuelled by the launch of the Hyundai Creta, Mahindra TUV300 and the S Cross.

The trend points to a growing preference for UVs, especially sports utility vehicles. “Customers are faced with infrastructure constraints even as the situation is improving. There is a shift towards stronger vehicles with high seating that gives passengers more safety on roads. This is one of the triggers for the rising popularity of utility vehicles,” said Rakesh Srivastava, Hyundai’s senior vice-president (sales and marketing).

Hyundai’s SUV, Creta, launched five months ago, has seen bookings of 75,000 units and enjoys a waiting period of around three months.

Creta’s launch was followed by Maruti Suzuki’s S-Cross, by definition a crossover but falling in the UV category of the industry body. Maruti Suzuki has been selling about 3,000 units of S-Cross a month. TUV300, the compact SUV from Mahindra & Mahindra, launched in September, sells 4,000-4,500 units a month.

UVs, passenger cars and vans are three segments of the passenger vehicle market. UVs account for one-fifth of that market in India. 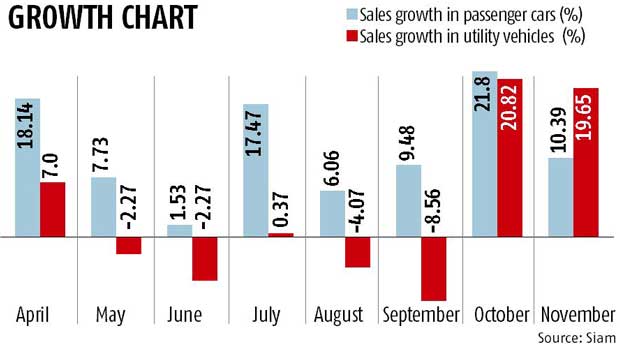 In the past financial year, the growth seen in UVs and passenger vehicle was identical at about five per cent. For the April-November period, however, growth in sales of passenger cars is much higher at about 11 per cent against a three per cent in UVs.