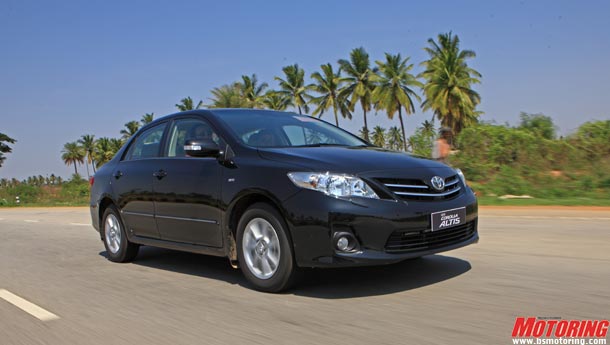 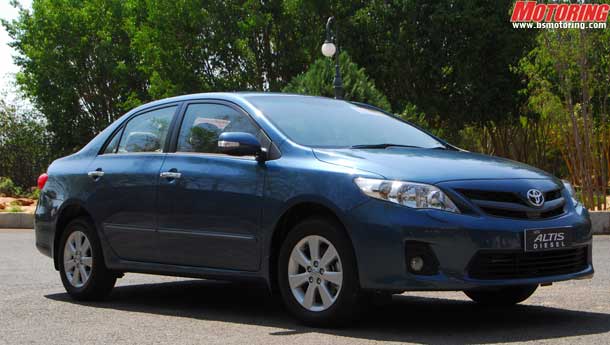 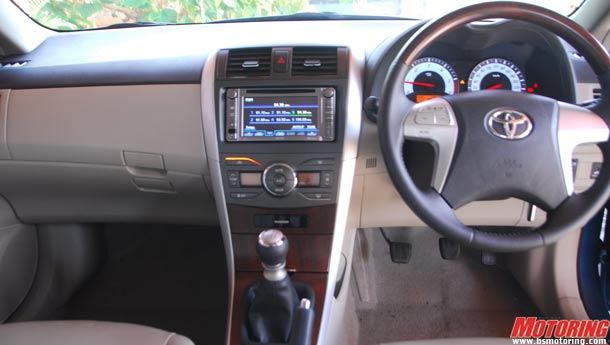 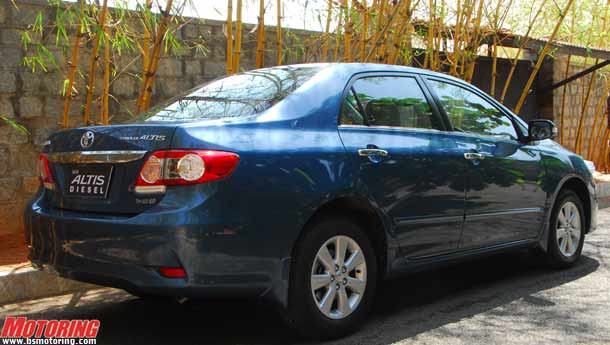 If it ain’t broke, don’t fix it. But in the case of the Corolla Altis, Toyota must have figured that a little bit of fixing won’t do it any harm. So the car now has a few changes here and there. It gets a Camry-like grille, a revised lower grille and new headlamps at the front and at the rear, it receives a chrome strip, a redesigned bumper and LED tail-lamps.

The diesel version gets a bar on the grille along with a mesh to distinguish it from the petrol version. A 6.1” DVD/Audio LCD Touchscreen control panel incorporating Bluetooth, USB and aux-in ports, perforated leather seats, rear seat arm rest, a revised instrument console etc feature on the inside of the car. Other additions include keyless entry, start/stop button, remote boot opener and reversing sensors.

But the most important ones are those that involve the petrol powertrain — the engine gets a few revisions leading to a slight bump in output and there’s a new intelligent CVT (Continuous Variable Transmission) option too. Before you ask: no, the diesel engine is unchanged and comes only with the six-speed manual transmission; no automatic for this one.

It’s been some time since I drove a Corolla Altis. Taking off on the roads around Bangalore’s new-ish airport in the petrol version with the six-speed manual gearbox, it does not exactly come as a breath of fresh air, but the few internal changes on the dash are quite apparent. It’s not the case however with the revised external appearance; the changes are a bit subtle for it to turn heads. Anyway, the Altis was never a head-turner in terms of external design, its appeal was always more intrinsic — in what it offered to its user. I would go on to say that the demand for the Etios is simply a fallout of the positive work the Corolla Altis and the Innova have done for  Toyota in the country.

Automotive wonks would know that the last-gen petrol engine of the Altis was known as the 1ZZ-FE. Now they’ll be happy to know that the internal designation for the new gasoline motor that powers the car is 2ZR-FE. Don’t ask me what that alphanumeric code means. However, what I can tell you is that the 1794cc 16-valve DOHC VVT-i has now been replaced by a 16-valve DOHC motor with dual VVT-i that displaces 1798cc. Output is up, with 138 bhp at 6400 rpm and 17.6 kgm at 4000 rpm, as compared to 130 bhp at 6000 rpm and 17.3 kgm at 4200 rpm in the last engine. The dual VVT-i means that the timing of both the intake and exhaust valves are now controlled depending on various parameters. The net effect is that the engine breathes much freely and does a better job of burning up those hydrocarbons.

So how does that translate in real life? More power is always welcome, and now with the engine developing better torque at lower rpm, the Altis has become even more driveable. Especially in the low and mid-range, which translates to ease of driving in urban conditions. You don’t have to ride the clutch that much anymore. This made itself apparent on our test route where we encountered several speed breakers at the defunct toll booths. The car would never baulk at low rpm and it would crest the bumps easily. Even in fourth gear, the engine pulls cleanly from low revolutions and picks up speed. In fact, anywhere beyond 1500 rpm, the engine takes up the slack and pulls forward. It also helps that the Altis is not a heavy car. When given the stick, you can even see the needle hovering at 190 kph on the speedo. Gearing is also tuned to better driveability, as you can push up to 100 kph in second, while third is like an automatic, going all the way up to 150 kph. You would normally never need a sixth cog, but its pretty useful on the highway, helping the engine relax while cruising and at the same time offering better fuel efficiency. However, the one issue with the motor is that at higher rpm, it tends to get a bit noisy and that can be heard in the cabin. And at higher speeds, the wind noise is also intrusive.

The bigger news is of course the new automatic transmission. Called the Super CVT-i with seven-speed Sequential Shiftmatic, the gearbox is a clever replacement for the last-gen five-speed auto. Clever because it monitors engine revolutions and is programmed to be fuel efficient, something which has been the traditional bane of automatic gearboxes. Toyota claims an ARAI (Automotive Research Association of India) fuel consumption figure of 15.22 kpl; now that should translate to somewhere around 11-12 kpl under normal driving conditions. Another improvement compared to your regular CVTs is the absence of the so-called ‘rubber-band effect’. Last generation CVTs would make the engine rev high as it searched for the right ratio, without any immediate effect on the speed of the car. Here, that effect is minimised and that makes the CVT that much more intuitive. Of course, you have the option of a manual override by shifting the gear lever up or down.But remember that it does not hold the revs when you redline it and consequentlyupshifts. So no sporty throws on this one.

The Corolla Altis was never a sporty kind of car anyway. The steering feel, for example, is more in tune with comfort and ease rather than feedback. The suspension is also engineered to keep the rough stuff away and it does a pretty good job of it. Though it has received a raft of changes, for a car that will typically be chauffeur-driven, Toyota should

have tried giving their best-seller rear AC vents — something which even the Volkswagen Vento and Fiat Linea have. With the revised pricing that will be announced soon, I am sure that Toyota will not break anything to fix it later! The writer was on a media invite from Toyota to test-drive the new Corolla Altis