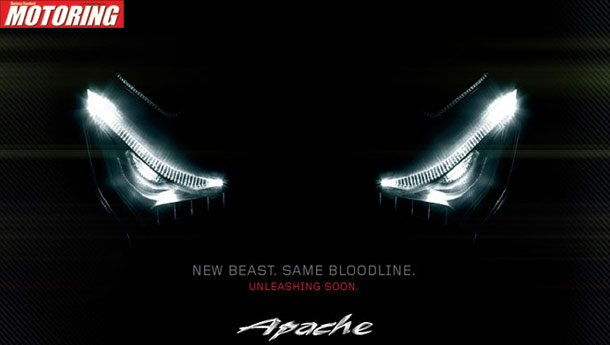 UPDATE: It has been revealed through leaked shots on the internet that the teasers hosted on the TVS site are not of an all-new, next-generation Apache. It is, in fact, just an update to the RTR180 ABS. A few photographs of the new Apache have been leaked out and from the looks of it, it seems like a mild update, rather than an all-new motorcycle. The tank seems to have been subtly refined. The front headlamp treatment now includes two bright defining running lights of sorts on top - exactly the ones you saw in the teaser shots - while the bodywork receives a faux carbon-fibre element on the tank, and a carbon-fibre look on the housing around the meters. The meters themselves seem to look the same, but we don't know if they've added any more functionality to them. The carbon-fibre treatment continues on the side panels as well while the Apache badging on the tank is now finished in chrome. From the badging, its also clear that it will have Anti-Lock Braking System (ABS) on offer. For all those expecting an all-new next-generation Apache, this news is certainly going to be a bit of a letdown.