Up there but not quite

When Hyundai launched the Fluidic Verna in 2011, it changed the mid-level sedan market with its radical exteriors, an array of comfort and safety features and its powerful engines, especially the 1.6-litre diesel. It ruled this segment for three years. Over time, however, the competition made up the lost ground as the Verna started to age. It did receive a minor upgrade last year with an LED strip in the headlamp cluster and a mildly stiffer suspension, but this failed to hold a candle to the Honda City and later the Maruti Suzuki Ciaz. This forced Hyundai's hand and the Verna got a much needed facelift. I headed to Udaipur to find out if the new upgrades would help Hyundai make amends.

I was quite intrigued to see the new garnishing that Hyundai has added to this tasty Fluidic sedan. The first change that strikes me is the all new chrome radiator grille. Now Hyundai likes to call it 'Wing Shape', but turn the clock back in time and you will realise that the last-generation Toyota Altis had a similar grill. Don't get me wrong, the new nose does make the Verna look striking, but we are so used to Hyundai thinking outside the box when it comes to design that it was a bit disappointing to see a reworked Altis grille. The Verna comes with a lot of gusto as the new elongated headlamps resemble a broad khukri, the Gorkha knife, and the fog lamps look like boomerangs. The designers have worked overtime to ensure that the car looks muscular with prominent creases on the bonnet.

The side profile remains unchanged, except for the new all-chrome door handles. And with the 16-inch diamond cut alloy wheels, the Verna retains an air of elegance. Coming to the rear, the sedan has a new tail lamp cluster and the chrome strip above the number place is now broader and more prominent, which makes the design more dynamic. Hyundai has decided to boot the twin chrome exhaust pipe, which was slightly gimmicky but it looked sporty. Also the rear reflectors on the bumpers have been redesigned and are now a mirror image of the boomerang fog lamps. 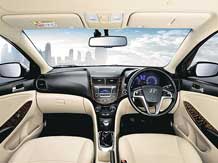 The Verna's cabin has always been loaded with features, and after a quick look it is quite apparent that there aren't any significant changes here. The three new additions are the rain sensing wipers, auto mode for the headlamps and the Ergo lever. The lever, which was first introduced in the Skoda Rapid and later in the Volkswagen Vento, allows the rear passenger to move the front seat forward for leg space. This is no doubt a very handy addition, but the way the lever is placed on the right shoulder of the seat, it looks quite crude. In the Rapid and Vento, the lever beautifully merges with the seat. Hyundai continues to have an impressive entertainment system, which provides enough boom with its six speakers. It comes with all the bells and whistles: Bluetooth connectivity, USB and auxiliary port. But the most significant upgrade is the inbuilt 1GB memory space. In all honesty, the cabin is starting to look old. The display screen is small and the blue backlighting gives the screen a jaded look. Another feature that I felt Hyundai missed out on is rear air conditioning.

Hyundai has retained the 1.4 litre and 1.6 litre engines in both petrol and diesel versions. I drove the top seller, the 1.6-litre diesel engine. Press the start-stop button and the hum of the powerplant is palatable. Both the NVH (noise-vibration-harshness) level and the refinement quality impress. Hyundai has always made powerful diesel CRDi engines and this motor is as responsive as it comes. Churning out 126 bhp, this is the most powerful engine in its segment. The initial punch is impressive and the six-gear transmission complements the powerplant. But there are times when you may be obliged to shift gears as the initial sprint tends to trail off after reaching the mid-range power zone.

The Verna behaved well on city roads so long as there weren't too many undulations on the driving surface. The car's soft rear suspensions have often given passengers a nauseous ride. But this time when I drove it, it became evident that Hyundai has tweaked the rear coils. The vehicle didn't wallow like it used to earlier. The Korean car maker has added bumper stoppers in the suspension to stiffen it further and to carpet a thud when it goes over a pothole. Any impact is, therefore, cushioned before the passenger feels it. But this doesn't mean that you can take on sharp corners smoothly - the body-roll can still be felt. The steering wheel appears to lack any sort of feedback and remains too light, which makes it easy to use in the city, but not on the highway, where it needs to weigh in.

The Hyundai Verna remains an attractive package as a whole. The new radiator grille makes the Fluidic design look mature, yet contemporary. Even though it has almost every feature you can think of, Hyundai has relaunched the six-airbags option. Also ABS comes standard in all variants. When it comes to exteriors and performance, the Verna is still very much up there with the competition, but the cabin is looking old. The rear seats feel uncomfortable and lack legroom. The facelift will definitely attract buyers and will make Verna a force to be reckoned with, but it is unlikely that it will become the segment leader.
Arup Das is Features Editor of AutoX
HYUNDAI FLUIDIC VERNA 1.6L CRDI VGT DIESEL
Engine: 1,582cc/ 4 cylinders/ DOHC/ 16 valves
Transmission: 6-speed manual/ front wheel drive
Power: 126bhp @ 4,000rpm
Torque: 260Nm @ 1,900-2,750rpm
Price: Rs 11.46 lakh (Ex-showroom, Delhi)