Up next: Driverless cars

There has been a lot of talk about driverless cars in recent days. And no, there is no sequel being planned for the atrocious Tarzan: the Wonder Car, thank god. But then that is the problem — driverless cars seem so futuristic that you can only reference them through Hollywood hits like Christine or Bollywood flops like its 2004 remake. But are they so far into the future? Carlos Ghosn, chief executive of Nissan-Renault, says, “Driverless cars are at least 10 years away, but forms of autonomous driving will emerge next year.” Speaking at the Mobile World Congress in Barcelona a few days ago, he said it would require a decade for regulatory issues related to robotic cars to be put in place, but by 2018 we should see cars that can drive themselves on the highways. That’s just three years from now.

The interest in driverless, or autonomous, cars has perked up after Google unveiled its cute product two months ago. Google has also been testing its Chauffeur system retrofitted on regular cars, including the Toyota Prius, Audi and Lexus for some years now and has already logged over 1.1 million kilometres of accident-free driving.

Other companies too have made some miles on a completely auto-run machine. Among the incremental steps to a fully automated car is auto parking, now fitted in some premium cars. Once you find a parking slot, you can get the car to manoeuvre itself into the space. BMW’s X5, though not the one currently sold in India, has the Traffic Jam system meant to ease life for the driver with the car driving itself at up to 40 kmph in gridlocked traffic. Mercedes-Benz showed a self-driving S500 Intelligent Drive at the Frankfurt Auto Show in 2013, with plans to have it in showrooms by 2020. By that year, Audi’s A6 Avant, which has undergone rigorous testing and achieved speeds of 60 kmph on highways, should also be up for sale.

As early as December this year, low-speed, self-driving vehicles could be in public use in the Netherlands, where two autonomous shuttles will begin rolling in the city of Wageningen. Running at 50 kmph, these electric cabs will ferry passengers on a 6-kilometre stretch of public roads. Britain too has the state-aided Lutz Pathfinder vehicle that will possibly be put to public service soon. 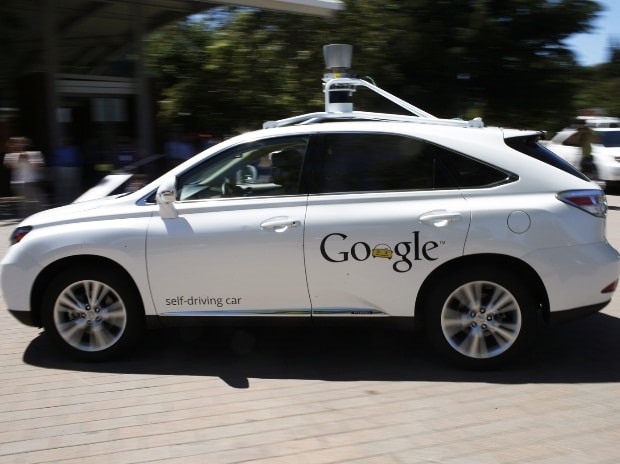 A car retrofitted with Google’s Chauffeur system Currently, motor vehicle regulations require most prototypes being tested to have someone at the wheel. So you will not find yourself chased by a ghostly car just yet. Four states in the US, Britain, Germany and the Netherlands have tweaked local laws to allow such cars to run on some public roads. The drivers do little, except to ensure the car turns correctly on highway exits.

Most of these cars employ sophisticated mapping and imaging systems, in particular, Lidar, a combination of laser light and radar. The Google car uses 64 laser beams and takes millions of measurements per second to create real-time 3D pictures of the environment around it, including of cars, objects and people in the vicinity. The Chauffeur system then superimposes this mapping on preloaded maps showing the location of stationery objects like traffic lights, kerbs, kiosks and so on.

Other technologies used in these cars relate to vehicle-to-vehicle communication to prevent collisions. (Prepare for that Hollywoodian day when cars will conspire among themselves to take over the world!) Night vision allows the cars to map areas beyond the pale of the headlights, while stereo cameras provide directional and distance data for 3D mapping.

There are some safety concerns, and funnily enough, more in the “moral” space than in mechanics. Take a tight road situation where the car has to “think” like a human being to avoid casualties — the fear is that a driverless car, such as they are being conceived of today, will be programmed to protect its occupant with little concern about whether it kills someone else in achieving that objective. That, of course, would seem like a frame from a horror movie starring a vengeful driverless car.