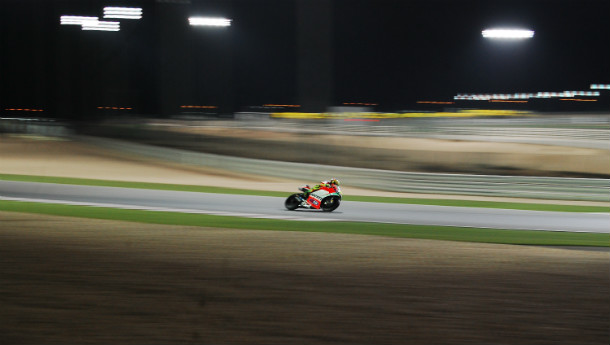 My whole entire life I’ve hoped, prayed and wished for one thing. To be able to watch a Formula 1 race live and, if fortune would be kind enough to me during this earthly pilgrimage, to be able to interview Michael Schumacher. And then, all of a sudden when I was trackside at the Indian GP, wearing a photographer’s vest and standing 10 feet away from those cars, it felt like... well, if I’m to be entirely honest, I did entertain the thought that I’d gone completely loopy, none of it was actually happening, and I was hallucinating. Now though, on viewing sufficient photographic evidence I am convinced that it did happen - all of it. The goosebumps come back every time I think of that lovely October weekend.

There are many other things on my motorsport bucket list, a list that only seems to grow longer, no matter how many items I manage to strike off. But something that didn’t figure very high up on that list was being trackside at a MotoGP race. Not for lack of interest in the sport, mind you, but because I can think of a fair number of people much more knowledgeable about MotoGP than I am (an obsessive interest in F1 does take a fair amount of time). And so, it was with this nagging feeling of guilt that I set foot on the Losail International Circuit at Qatar, all the while pondering whether or not I deserved the wonderful experience that was about to come my way.

As is the case with wonderful experiences though, they tend to give you a bit of a high, thereby chasing away any negative feelings you might have. And so I found myself gleefully walking down the pitlane in the twilight dusk and taking in the sights. Being in the MotoGP paddock was so much more relaxed than being in the F1 paddock - it was rather refreshing actually. The crowds were fairly relaxed as well - after all, most MotoGP fans were drawn moth-like to the Ducati team building, waiting for The Doctor. And, when he did emerge, any chances of taking a photograph were quickly shot to the ground - my camera caught someone’s back, bits of the sky and then my shoes as I was pushed and shoved out the way. The rest of the paddock was quieter.

Once I’d digested the fact that I’d seen nearly the entire motorsport grid saunter right past me, it was time to go out onto the track. MotoGP qualifying. My first experience of those beautiful machines up close. Nothing can prepare you for it. Standing behind the barricades with three MotoGP nuts - we were very close to the track, much closer than we’d imagined, and those motorcycles howled right past us. Gone in the blink of an eye, the tremble in your hand before the quick click of a shutter. The numbers whizzed past 46, 26, 69, 99, 1... Gosh.

At some point during qualifying, and giving us a repeat performance during the race as well, we had the good fortune of seeing Giacamo Agostini motor past us on a scooter. Surreal? Yes, it certainly was.

Later that very evening I heard a voice trail off as an elderly gentleman walked past me with a teenager (probably his grandson) walking beside him and a little boy scurrying to keep up with them. ‘And he was one of the finest Grand Prix motorcycle racers of his day...’ he was saying to them of one of those greats he’d witnessed racing in his time. A family at the racetrack because of pure passion for the sport. That’s what motorsport is, and should be, all about, I thought to myself.