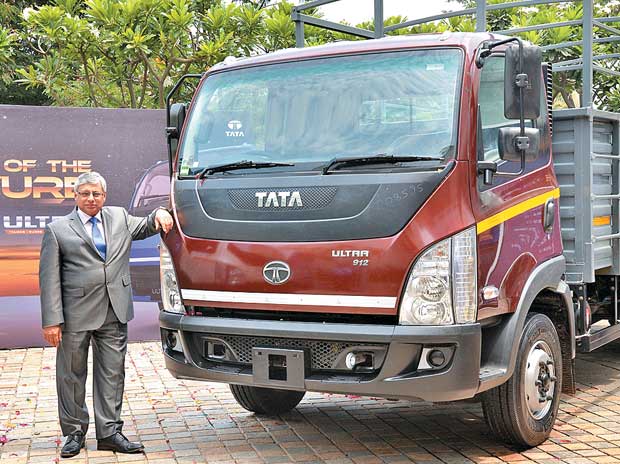 Ravi Pisharody, Tata Motors Commercial vehicles have been hit the most in the current slowdown. However, Tata Motors (Tata) is taking this lull as an opportunity to launch products to take on competition such as Ashok Leyland, Eicher and Bharat Benz (from Daimler). It has picked the intermediate and light commercial vehicles (ILCVs) segment which comprises trucks with capacities of 5-tonne till 15-tonne, to launch a new brand, Ultra.

"With Ultra, we are launching a brand in this segment (ILCV) for the first time," says Ravi Pisharody, executive director, commercial vehicle business unit, Tata Motors. Ultra will have two models, with weight-carrying capacities of 8-tonne and 10-tonne that were launched in Chennai. Tata had created a stir with its ultra-light commercial vehicle brand, the Ace, a while back. But why has it chosen to spruce up its ILCVs now?

Export hopes Tata is seeking growth outside India for its commercial vehicles. “We are looking at three-times growth in exports in three-four years from the current 50,000 units,” says Pisharody. The growth will be driven by the combination of demand from the existing markets such as South Asia and Africa, and the recent foray into Indonesia and Australia. “We are also going to enter Malaysia, Philippines and Vietnam,” he says.
One, it has seen recent launches from competition such as Supreme from SML Isuzu, Partner from Ashok Leyland (which already had Boss in the 8-tonne and above range), Eicher and Bharat Benz. And, second, branding in this category is needed as analysts say the demand for light and mid-size commercial vehicles will only increase as the economy improves.

Hence, the launch of Ultra on a new platform, to tap the market. "We have benchmarked the products against Japanese technology, which dominate (globally) this category," says Pisharody. He says that Ultra will be the platform that will see a range of products being launched in the next two-three years, for both the domestic and export markets.

Brands matter in CV
In the history of Tata's commercial vehicle business, it has sold trucks under the parent brand; traditionally there has hardly been any sub-brand. Ace had been extended to more variants and Magic was launched in passenger CVs. However, Tata had trucks such as LPT 712 and 407 in ILCVs but there were no distinct brands in this category.

"We started with the Ace. We are now moving towards brands for certain categories," says Pisharody. While the Tata Prima will cater to the mid to premium commercial vehicle segment of 16-tonne and above, the Ultra will now cover Tata's launches across a wide range of ILCVs ranging from 4 to 11 tonne.

Ashok Leyland, too, had recently plugged its portfolio gap with Partner in the 3.5-7 tonne LCV segment. It had entered the LCV space through a joint-venture with Nissan Motor Company, Japan. After Dost in ultra-LCVs (where Tata's Ace operates), Its Partner has been geared to tap into the other half of LCVs. LCVs account for around 68 per cent of CV sales, according to market estimates.

The brand is designed to cater to both domestic and export markets, including West Asia, South Africa, Thailand and Indonesia. Pisharody says the car-like design and feel, commercial engine, tubeless radial tyres and disc brakes are first-of-its-kind. Fuel economy would be around 10-15 per cent higher than the competition, he claims. Ultra will target demand in haulage, distribution, construction, courier and perishables industries, and facilitate intra-city and rural commercial transport.

Slowdown drive
Pisharody says that there is no right or wrong time to launch a product. "We are in a cyclical business; every four-five years, there is a cycle, though triggers can be different. In India, we are in a growth economy that has a general growth tendency". In European markets, the cycle in the long-term is flat, but in India it is different. In the downturn and with a lot of excess capacity, a differentiated product can give an edge, he says. "Our investment in the products and technology are continuous. If we try to delay things because of recession, we will face challenges".

In the 2008-09 recession, expansion at Tata's Pune plant was sanctioned. But Tata held back for six-eight months due to the slowdown and when the demand bounced back strongly, the company struggled to catch up.

The company has invested around Rs 600-800 crore to launch the Ultra brand, along with product development and increasing capacity.

The company expects the size of the category to grow by 15 per cent.