U-VA vs Swift vs Getz 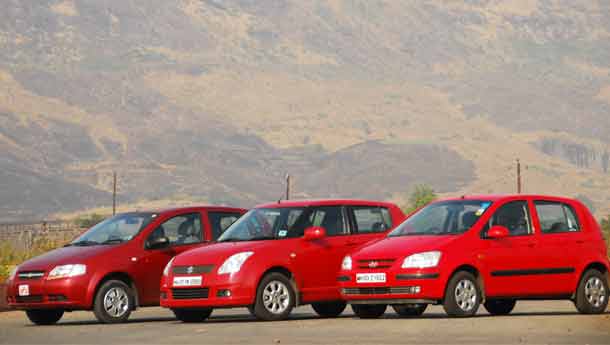 If you drive more than 70 km a day, then chances are that you are not reading this story at all. Because you would have already read the cover story in this issue and would have decided to buy the Suzuki Swift diesel. Good choice, because it is a brilliant diesel car that will tackle the urban commute without burning a hole in your pocket. Still reading? That means you don't particularly care for diesel economy as much as for the refinement and performance that come with petrol-powered cars. Guess what, you are in the middle of the right plot since we will have a single winner 1,200-odd words from now.

As you would read elsewhere in this issue, the Chevrolet Aveo UV-A won the BSM COTY 2007. And as expected, we got some flak from the enthusiast community for not awarding it to the Honda Civic. But spare a thought for the little Chevrolet here. If the trend-setting Hyundai Getz could win the COTY followed by the brilliant Suzuki Swift, why shouldn't the Chevrolet Aveo UV-A win? Sure it is a late entrant to a happening segment and sure it was part of the dowry package that General Motors got when it added Daewoo to its list of wives some time back. But certainly, it is not a car penned by a bunch of college kids (Giugiaro did the honours) and nor was it built by amateurs in a dark garage (for heaven's sake, GM is still the largest car maker in the world and it ought to know something about building cars).

We at BSM do follow a COTY rating system that is in sync with the needs of the Indian car buyer – and that means more points for price and fuel efficiency. We went without prejudice (the state of affairs at Detroit is reason enough to neglect everything that GM does today, still) and bingo, we had the Chevrolet Aveo UV-A stepping atop the podium. It is quite affordable (the range starts at a very Bata-ish Rs 3.99 lakh) and in our road test it returned a combined fuel consumption figure of 13 kpl. And it didn't disintegrate while we were at it. We liked the space, build quality and the surprisingly peppy yet simple motor that powered it too. More than anything else, we loved the ride quality which can make the driver think that he is driving a more expensive sedan rather than an affordable hatch. And yes, we also liked the fact that GM was offering ABS at least as an option.

So in our book, the Aveo UV-A, despite the name and the monkey ads, is a worthy car. Worthy enough to challenge the two previous COTY winners? Let us catch the action at BSM's Performance Evaluation Track.

Swift on the go

As I have written in many stories before, there is nothing like a PET morning. The excitement of driving brand new cars builds up soon after a PET story is slotted into the edit brief for the month. So I found myself waking up my very own Swift ZXi early this cold January morning. She came to me almost a year ago but other test cars ensured that I put in only 10,000-odd km on the odo. The car smells new even now and I cherish every moment I get to drive my car. But this was no normal commute. Today she would wage a war with an old foe, Srini's Hyundai Getz and a spanking new Chevrolet UV-A. Being the quickest and the fastest of the bench, the Swift got the honour of starting the proceedings at the test track. And oh boy, was she impressive.

You see, it is my own car and I had no intention of pushing it to a level where balancing weights start flying and chunks of rubber come off. Instead I concentrated on a near perfect launch and near perfect braking. The Swift accelerated to 100 kph in 12.85 seconds and felt absolutely agile and sure-footed through the lane change manoeuvre. The braking, assisted by ABS of course, was drama free as it brought the car to the mandatory 'zero'. Powering off into the U-turn under acceleration meant dealing with the weak link in the Swift's dynamic packaging – the over-assisted steering wheel. But then, I have got used to it by now. Gunning to the slalom course with the speedo aligned for a 60 kph entry speed, the Swift felt pretty comfortable. Quick directional changes come easily to this car thanks to great weight distribution and a flick-from-the-hip kind of determination is not common to front-wheel drivers. In short, the Swift managed to carry a steady speed through the slalom all the way to top-tyre performance. No time wasted in corrections, no lift-off over steer to counter as we entered the skid-pad and onto the flying finish. Time posted – 56.81 seconds. Well done, master and you have saved my rubber, the Swift seemed to SMS me.

Getz on with it

Grr, time to thrash Srini's flaming red car. Biggest engine capacity of the three (1341cc) and the torquiest of the lot should translate to some serious performance, right? Unfortunately, that is not the case with the Getz. Srini owns one alright, but he never fails to call it a fine appliance that can do the job of transporting people in spacious comfort. But why? Two factors, weight and gearing, go against the Getz recording decent numbers. A second gear that runs out of breath ensures that it takes close to 15 seconds for a 100 kph run. But once at three digit speeds the Getz feel happy changing lanes. Srini never waited for a car equipped with ABS and but the car didn't lock-up or get off the line on our 'zero' zone. I had to literally spank its bottom to get it to go around the U-turn under acceleration and then on to the slalom course.

We may have complained about the 'over-square' nature of the Getz architecture before and its propensity to offer copious amount of body-roll on bad roads. But on our smooth PET surface, the Getz is almost as flickable as the Swift if not as quick while at it. There is a great deal of understeer as I try jabbing the brakes to shed some speed to enter the skid-pad. And then it is not very comfortable around the pad too with excessive body roll and stressed out tyres howling for mercy. Time posted – 58.10 seconds. Slow, but not that far off, right? Told you Srini, it is not the car, it is the bloke behind the wheel that matters.

We have said this before and we are saying this again – the Aveo UV-A gives you a big car feel. Now that is a good thing when you are driving on fast highways but does it also mean that the car is instilling a false sense of security in you? We would soon find out. With the smallest of engines and only 75 bhp on tap, the UV-A seems fit to compete with the Swift DDiS rather than its petrol cousin. It takes a loooong time to touch the 100 kph mark too and the terrible gear change ensures that there is not much fun doing the spirited runs. Where the car shines is the way it changes lanes and how it comes to a halt. We couldn't get an Aveo test car equipped with ABS but the car came to a decent stop.

The UV-A, I think, has the best weighted steering of the threesome and that means better control over torque that is sent to the front wheels – especially on spiced-up U-turns like the one we have incorporated in the PET. Good brakes, again, line-up the car for the 60 kph entry into the slalom run and it is going great guns for the UV-A till now. After the third pylon it becomes obvious that the UV-A is not the Fiat Palio nor is it the Swift. You see, the Palio gives you a grown-up feel but it won't bite you back if you are a bit too committed towards carrying insane speeds into a corner. The UV-A will. And it almost did. Sense prevailed and I could keep things under control but the last three pylons on the slalom course were near nightmare as the dynamics of the UV-A package was exposed in a rather spectacular fashion, topped by some serious body roll. Heavy understeer into the skid pad spoilt the time somewhat too and the Chevy finished the run by stopping the clock at 57.45 seconds. Good show, but numbers don't tell the true story in this case.

As you would expect, we considered the fact that it was a base version of the UV-A which was battling with a top-end Swift and the GLS version of the Getz. But even then, the PET results are more conclusive than you would imagine. The Swift reigns supreme when it comes to the fun-to-drive stakes now followed by the UV-A. The Getz is neither here nor there, but will do most of what it is asked to without serious flaws. The Swift looks more contemporary while the Getz and the UV-A can do desperately with a facelift. The Getz already got one last year for other markets and let us hope Hyundai brings it on for the Indian market this year. The UV-A and the Getz are more spacious than the Swift and both will carry more luggage than the Suzuki too. Swift makes up by being the most fuel efficient of the lot – 13.5 kpl combined average compared to 12 kpl for the Getz and 13 kpl for the UV-A. The Chevrolet is the least expensive if you go for the basic models while the Getz range starts with an expensive tag (though dealer level bargains are there to be won). The Swift range is amazingly elastic with a model for most pockets. And yes, it is the Swift that offers a model with ABS, EBD and two airbags as standard. Both the Getz and the UV-A can be bought with ABS but that does not put it in the Swift ZXi league.

And our winner is...

Our Car Of The Year 2007 is a spacious hatchback with a capable yet lean motor. Exceptional ride quality is the bonus here. The UV-A should be your choice if you want a car that is quite an all-rounder. The Getz, our winner from 2005, is to be bought the same way you buy any other household item. It does the job. Period. And that does not include ensuring a smile on the driver's face. The car to buy in this segment continues to be the flamboyant Suzuki. Looks that begins at sporty and ends at cute, a peppy motor that can inject fun even into a commute and reasonable economy are ingredients that defines any automotive segment, and the Swift, our winner from 2006, certainly owns it for now. Only negative that you can hurl against it is its cramped rear seats, lack of enough luggage space and the fact that it is as common as the flu. But that shouldn't stop you from joining the bandwagon.