Shares of tyre companies on Wednesday gained up to 8.3 per cent following a sharp decline in natural rubber prices.


Shares of Apollo Tyres, JK Tyre Industries, Balkrishna Industries and CEAT gained 4.58 per cent, 3.51 per cent, 3.10 per cent and 2.85 per cent, respectively, on Wednesday.


A leading industry official attributed the increase to falling prices of natural rubber.


“The decline in prices of natural rubber would increase profit margins of tyre manufacturers, assuming other expenses remain the same. Therefore, tyre stocks are in demand today,” he added.


On Wednesday, natural rubber in the benchmark Kochi market witnessed a steady decline to close at Rs 15,025 a quintal, over seven per cent decline from Rs 16,175 a quintal a month ago.


“Excess inventory/production of rubber, coupled with weak global demand, had led to a significant correction in rubber prices, leading to a sizeable margin expansion for tyre companies. Rubber prices increased sharply to Rs 166 a kg in January, from Rs 93 a kg a year ago. This has taken a toll on tyre manufacturers’ profitability (partly reflected in the current earnings before interest, tax, depreciation and amortisation, or Ebitda, margin trend), while this is likely to hurt operational performances going ahead as well. Rising competition is an added headwind,” said Mihir Jhaveri, an analyst with Emkay Global Financial Services. 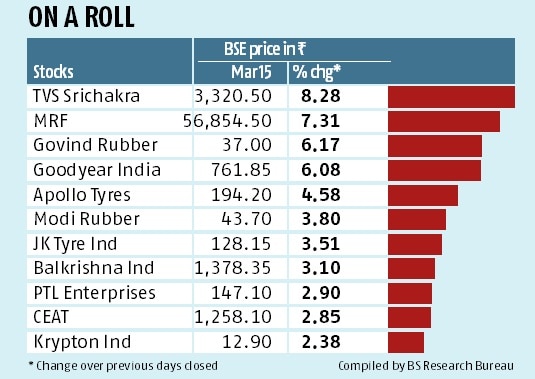