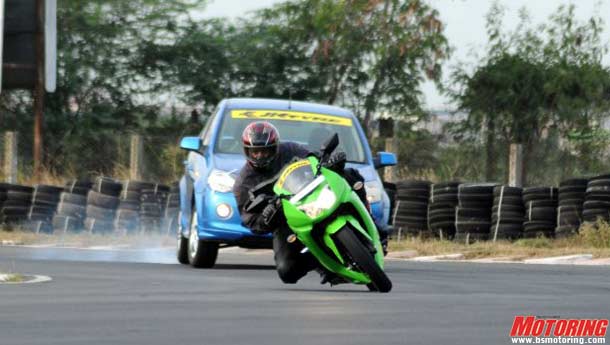 They have it all, from danger to the promise of untold sin. Their heartbreaking ways will leave you weak in the knees. Here's ten of my reasons why they rule the world of cool and cars make do with second place. How many d'you have?

Stand by me
Few man-made things are as cool as a motorcycle sidestand. Kick it out, swing your leg back and up, removing your helmet while swinging around. If you've not gotten all tangled up in your own limbs and fallen in a heap, you're just about the coolest thing for miles around. If anyone's watching, that is. Best practice this a few times before venturing out to dazzle the world with your slick moves. And make sure that damn stand hasn't snapped back into place.

Hello Angels
Ever heard of burly, menacing, tattooed ex-cons thundering across barren landscapes in cars? There's something immensely impotent about the scene, isn't there? The Hell's Angels may have also driven cars, but they will always be remembered for the roaring choppers that raised hell and rode into the history of cool.

Getting Physical
Look at Chris Pfeiffer, look at the Red Bull X-Fighters. Nothing looks as cool as a motorcycle making a mockery of everyone from Newton to Hawking. The only stunt that most drivers manage with their cars is faceplanting on the tarmac by tripping on the door sill. Very few drivers can actually drift their cars, but here again, motorcycles look far better while drifting.

Curve Ball
God gave women curves to look good on a motorcycle, I say. A car hides all there is to be seen. Epic fail. A biker chick, to use a stereotypical term, comes a close second to bikes themselves in terms of heat generation. And if she can actually ride a motorcycle, that just might be better than the entire Kamasutra put together.

Love's A Pain
A humble Mahindra Xylo is far more practical than a BMW R1200GS on a cross-country trip. However, after covering almost 2000 km on the Beemer (the same route I'd taken in the Xylo previously), I realised that one of my backpack's strap had been fluttering in the wind right in front of the exhaust's mouth, but never touching the exhaust itself. I now carry around a backpack that has a half-melted strap and one look at it, no matter where I am, is enough for me to relive the ride in a single gratifying moment. Ain't no car gonna do that.

Ready, get set, gone!
For a car to be fun, it has to have an improbable number of zeroes in its price tag. And even when you do get that car, a motorcycle will still beat you. With bikes, accessible performance is a given and a major reason why there is no such thing as a boring motorcycle. Even a 125cc, single-pot bike will inject fun into your existence. An average car will only make sure that you spend more time in traffic jams than is necessary. When it comes to outright performance, a litre bike that costs as much as an average family sedan will show the best of supercars a clean pair of...actually, a single rear tyre. And those of you who're waiting to throw the impossibly gluttonous Bugatti Veyron in my face, I've got two words for you: Y2K Streetfighter. Eat that, suckers.

Kit On
Motorcycle kit looks better than any of the designer threads that are churned out by effeminate men and masculine women all around the world. Unlike the unreal physiques of models, you can actually be a normal person and wear riding kit. What's more, your average riding jacket, pants and boots will flatten those assorted unwanted bulges and make you appear as streamlined as your machine. Riding kit looks good AND protects you. What more could you want? And though you will have to contend with looking like a lost astronaut when off the bike, even that's a lot of fun, trust me.

Wind In Your Face
You've heard it all before - being part of the scenery, the wind in your face and the bugs in your teeth. And if you've missed it, you've missed one of the most elemental joys of life. Motorcycling appeals to the primal instinct that lies dormant inside all of us. The feeling of your right hand putting power down to the road, the rush of shattering personal speed records, the thrill of cleaving air at never-seen-before velocities - it's all slightly otherworldly. A motorcycle at 100 kph feels better than four wheels doing twice that speed. A motorcycle at 200 kph feels like nothing else. No wonder I fall asleep within five minutes of entering a car.

Lean Machine
Crouching low over the 'bars, a screaming motor under your chin, tyres at the edge of adhesion and your brain's gyroscope at the 'Max Lean Achieved' mark. Fighting centrifugal force on two wheels is the most fun part of riding a motorcycle. Cars? Well, they lean the wrong way.

Valentino Rossi
The impish legend is a good inspiration to ride motorcycles. In my opinion, he is one of the greatest talents to ever walk the earth, and I mean this across all walks/runs/stands/sleeps of life. I wish I had a fraction of his talent. And that, incidentally, is the exact amount required to win a MotoGP title these days.