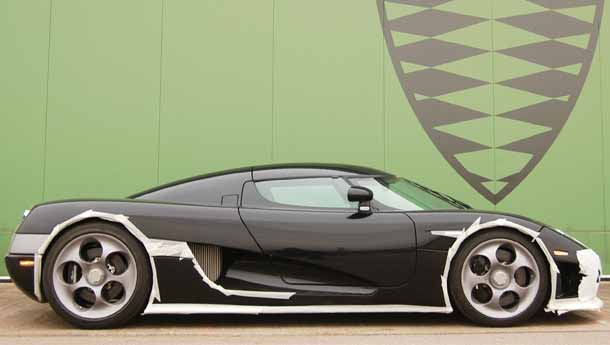 The Koenigsegg CCX made me sick. Literally. Seated beside Christian von Koenigsegg, the company’s striking-looking owner, I had been running an appreciative eye over the bespoke interior while he drove the car (if something like this can be merely called a ‘car’) down the highway adjacent to the company’s HQ in Angelholm, Sweden. Traffic was very light and Christian was pootling along, chatting to me about the car’s driveability. Suddenly, and without any semblance of warning, he floored the loud pedal. I had a couple of milliseconds to watch the tacho needle leap up with astonishing rapidity before I was pinned deep back into my seat, hands clutching at its sides in simultaneous surprise and fright. Several stud farms’ worth of thoroughbreds (Eight Hundred and Six of them, to be precise) burst through the starting gate and flung the machine down the road as if from a giant slingshot, blurring the scenery and causing my stomach to be left a few hundred feet behind. I’m not sure what the longitudinal G forces are in this thing, but at full chat I can tell you that they’re enough to cause an unsuspecting fellow like me to turn slightly green.

Mind you, the nuclear reactor masquerading as an internal combustion engine is the sort of thing that’ll make even the hardiest punter a bit breathless. It doesn’t half have an interesting history, either. When Christian first went looking for an engine to power his dream supercar, he cut a deal with Audi for a V8, and they agreed to supply him the units he needed. Parent company Volkswagen, however, wasn’t especially pleased at having been left out of the negotiations, so they threw a fit and axed the deal. Were they perhaps nervous that their soon-to-be announced Veyron would be put in the shade? We’ll never know. Anyhow, Christian next approached Motori Moderni, an Italian company who had developed a boxer-12 engine for use in F1, and an agreement was arrived at in principal, only for the firm to close down at the last minute. Most ordinary people would probably have thrown in the towel at this stage, but Christian is quite an extraordinary fellow. You don’t start a supercar company at the age of 22 just by being an average Joe, after all. He finally obtained a V8 engine block from Ford Racing, based on blueprints of the SVT Mustang Cobra, and this was the unit that powered the initial run of CC monikered cars. The block for the 4800cc V8 in the CCX (Competition Coupe Ten, to celebrate ten years of the company) is now supplied by Grainger & Worrall of the UK, who also supply castings for the Bugatti Veyron as well as for F1 cars. So boo to VW.   And what a V8. Engineered, built and dyno tested completely in-house (a unique achievement among boutique supercar makers), the engine spits out the small matter of 806 bhp – and that’s just on 91 octane fuel. Fill ‘er up with biofuel and that figure jumps to over 1000 bhp, because the ethanol in biofuel has a higher octane value, which leads to more power. Regardless of whether you’re contributing to global warming or helping to prevent it, the sensation when you decide to get up and go is… well, sensational.

After the photo-op, Christian gestured towards the car and let me have a go in it. After a little low-intensity wandering about to get a feel of things, I decided to be more forthright and stepped on it. The twin Rotrex superchargers whistled almost instantly, the mid-mounted engine let out the most intoxicating roar I’ve ever heard and I was catapulted down the highway, not unlike Marty in Back To The Future. It was incredible, the way the car responded in any gear, at any speed, to further abuse of the accelerator. ‘That’s why I prefer the supercharged approach’, Christian had told me earlier. ‘Turbocharging has come a long way, and I’d get more power with turbos, but it’s vital that our cars respond instantly to the throttle.’ He’s achieved that goal, not to put too fine a point on it.

The CCX will murder a 0-100 kph run in 3.2 seconds and a standing quarter mile in 9.9 seconds, its sexy, slippery shape elping it along. If the car were any more instantaneous, it’d have to accelerate before you even thought about prodding the pedal.For my part, I prodded it as many times as I could (I had gotten used to the touch of nausea by now), just to hear the engine do its stuff when provoked. On one extended stretch, I let it loose for as long as I dared, grinning like a silly idiot as the digital speedo racked up numbers faster than I could register, the Ram Air system between the raised speed humps gulping in half the earth’s atmosphere. It sounds clichéd, but this car really does make you lose all sense of time and space during acceleration. It’s like being a human cannonball, only a lot safer. Given a long enough straight, a stock CCX will blast past 395 kph, making it the Guinness-certified fastest production car in the world. A certain Mr. Veyron might have a word or two to say about that when it attempts to officially break the record (unofficial records have already been set), but that’s looking into days ahead. For now, the CCX rules, ok?

‘Power-to-weight is one of the aspects of the car we’re always looking to improve, because the responsiveness of its handling and its acceleration depend on it,’ Christian had said. Well, scratch another ‘to-do’ point off the list. Every pony in the CCX hauls 1.46 kg of car, a figure to boggle the mind. Being hewn out of pre-impregnated carbon fibre and Kevlar helps a great deal, naturally. It handled flawlessly and with razor-sharp precision, at least to the extent that I was able to push it (I was driving a customer car, hence all the protective tape and the inability to really flog it), and never was I left in doubt about the 1.3 G lateral acceleration figure in the spec sheet. Even with road legal tyres, the CCX has near-ridiculous amounts of grip, and the sky would probably be the limit if you slapped a set of racing rubber on.   Every steering input was met with exactly the amount of response required, and the unit itself was satisfyingly meaty, unfailingly precise and with superb levels of feedback. The adjustable VPS pushrod dampers and Eibach springs took care of everything in their path, without unduly rattling me about, and the Cima six-speed gearbox with a torque sensitive limited slip diff was a work of art – a bit heavy for a first-timer like me, but firm and with a delightful ‘clack’ when I shifted gears. And it’s not like it’s an exclusively on-the-boil car; what’s almost as amazing as how fast it can go is how slow it can go as well. I’m not exaggerating when I tell you that it’s a doddle to drive at city-traffic speeds, almost as easily as a family sedan, and that even though it’s virtually flush with the road, the ride quality is surprisingly good. Does it stop, you ask? Ever run smack into a stone wall? That should answer the question sufficiently. For more eyeball-popping retardation, you can order 380 mm ceramic disc brakes.

The cabin, once you’ve executed a bit of a double somersault to get in, is a fine place to scare yourself silly. They’ll customise it any which way you want, but the superb Sparco seats (oh, what a delight they are to sit in), the easy to read meters and the somewhat in your face ‘telephone dial’ control unit are constants, the last named being considerably easier to use than all the iDrive/MMI/Comand variants around. This really is a super (hyper?) car that you can live in and with, doing the stereotypical grocery run and license-annulling blast with equal ease.

The question is, would someone who’s just robbed a bank buy one of these, as opposed to a ‘plain-vanilla’ Ferrari, Lamborghini, Porsche or any of a clutch of other name-brands? Look at it this way. When was the last time you saw a Koenigsegg roll into the club parking lot? The others in the list are just so… common, aren’t they? The CCX is a true stand-out – it gives you unbeatable bragging rights, defies virtually all laws of physics (and common sense, while it’s at it), looks like the near-million bucks that it costs, is easy to drive and is the biggest adrenaline rush since someone discovered sex.

There’s just one word to describe it: un-bleeping-believable.