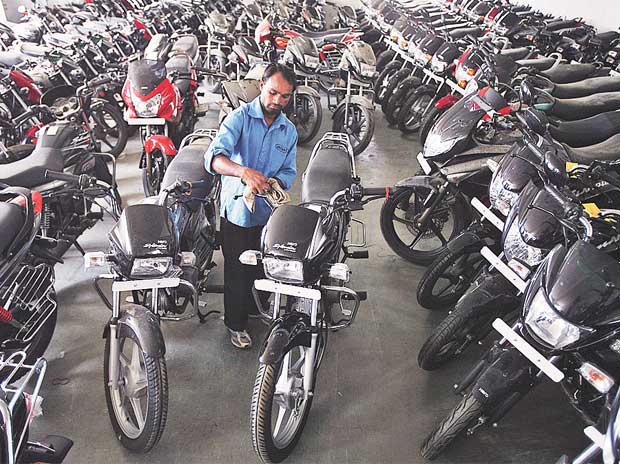 They are small and less glamorous than sports utility vehicles (SUV) and passenger cars but two-wheelers make more money for their makers than four-wheelers. Last financial year, the operating margins of two-wheeler makers in India were nearly twice that of the average margins of top passenger car and SUV makers.

The analysis is based on the audited financial results of unlisted and listed two- and four-wheeler makers. The sample includes six four-wheeler makers - Maruti Suzuki, Tata Motors, Mahindra & Mahindra, Hyundai Motors India, Honda Cars India, Toyota Kirloskar and Ford India. Other multinationals were dropped as their data for 10 years was not available.

Two-wheeler makers in the sample include Hero MotoCorp, Bajaj Auto, TVS Motors, Eicher Motors and Honda Motorcycle & Scooters India. Each company's standalone finances have been considered in this analysis to reflect their domestic automotive business.

Two-wheeler makers' superior profitability reflects in their balance sheets. The industry is almost debt-free and most companies are sitting on free cash. In 2014-15, the five two-wheeler makers had combined debt of Rs 1,082 crore on their books, down nearly 50 per cent over the past five years and equivalent to less than 5 per cent of their net worth. Maruti Suzuki is an exception and has remained debt-free through the period, and was sitting on Rs 12,600 crore cash at the end of March 2016.

"Historically, two-wheeler demand is aligned to consumer demand, while four-wheeler demand is correlated to industrial growth. As the former has been robust in the past six-seven years, two-wheeler makers have done better than other segments of the automotive industry," said G Chokkalingam founder and chief executive officer, Equinomics Research & Advisory.

Four-wheeler companies have together invested around Rs 71,000 crore in capacity expansion and new product development in the past five years. During the same period, two-wheeler makers' capex was around Rs 13,000 crore.

Matta, however, expects the four-wheeler industry to grow faster than two-wheelers in future. "In most markets globally, consumers have shifted to cars and SUVs from two-wheelers, in line with the rise in income. The same is likely to happen in India," he said.