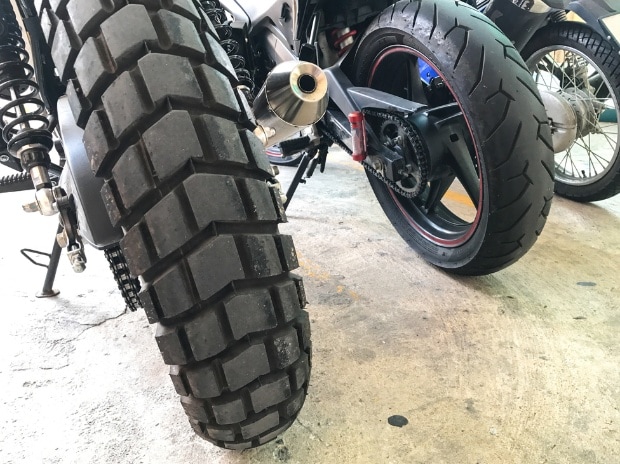 The domestic two-wheeler market showed a drop in volumes last month, the third such since demonetisation.


A drop of a little more than seven per cent in two-wheelers reflected in a five per cent hit in total automobile (passenger and commercial vehicles, two and three-wheeler) sales by companies to dealerships last month. This was in spite of a strong comeback in passenger vehicles (PVs), of 14 per cent growth.


The situation was better than December, when overall automobile sales declined 18 per cent, due to a 22 per cent drop in two-wheeler volumes. Even so, except PVs (cars, vans and utility vehicles), all segments of the industry showed a decline or flat growth in January, shows data from the Society of Indian Automobile Manufacturers (Siam).


PV sales grew 14.4 per cent to 265,320 units last month, helped by double-digit growth from a number of companies, including market leaders Maruti Suzuki and Hyundai. This is the most important segment of the industry in terms of value. The April 2016-January 2017 (first 10 moths of the financial year) growth for PVs is 9.17 per cent, keeping alive the chance of double-digit growth for FY17.


Commercial vehicle (CV) sales in the domestic market saw a marginal decline of 0.72 per cent last month. Within this segment, sales of light CVs dropped by two per cent, while that of medium and heavy CVs grew 0.6 per cent. 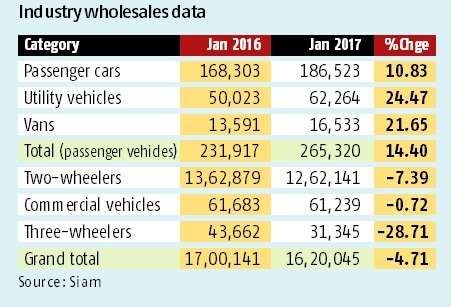 Vishnu Mathur, director-general at Siam, said the expectation was for a pick-up in CVs over February-March, when new purchases are normally done to claim depreciation benefits before the next financial year begins. “More, there will be significant advancement of purchases, especially in M&HCVs, as commercial vehicles shift to BS-IV emission norms from April and prices will accordingly move up,” he said.

Three-wheelers also seem to remain under pressure after demonetisation. January sales dipped 28 per cent to 31,345 vehicles.  The main dent came from two-wheelers, 80 per cent of the automobile industry’s volumes. While the segment declined a little more than three per cent, the decline in motorcycles was steeper at 14.5 per cent. Scooters, a fast growing segment prior to demonetisation, is also under pressure and volumes dipped six per cent. The two top two-wheeler makers, Hero MotoCorp and Bajaj Auto, saw a double-digit drop in volumes last month. “Rural India brings half of the motorcycle volumes. The cash crunch has been severe there, due to limited bank facilities,” said Mathur.


The January-March quarter looks challenging for the segment. Things could start improving when harvesting of the rabi crop begins from the middle of March. “Customers are cautious with their spending because of the uncertainties pertaining to the growth of the economy, as well as implementation of the goods and services tax, with the rates undecided. This quarter will be challenging for overall growth of the automotive industry,” said Abdul Majeed, partner at consultancy Price Waterhouse.