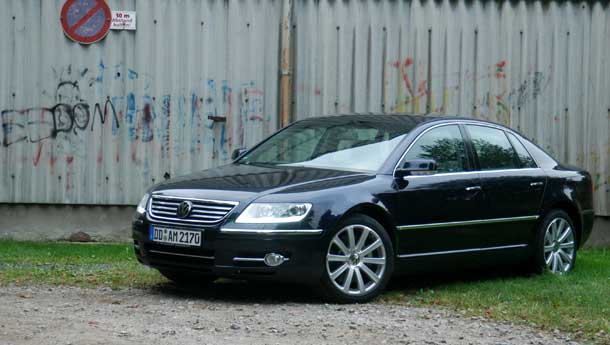 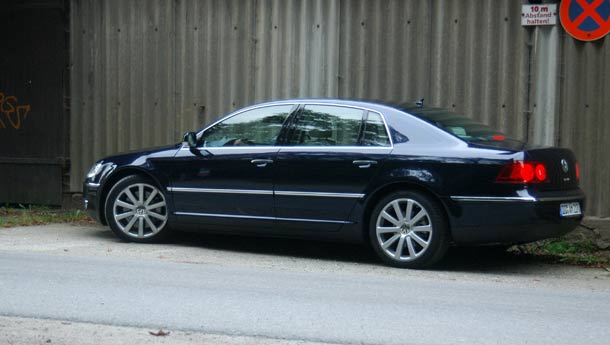 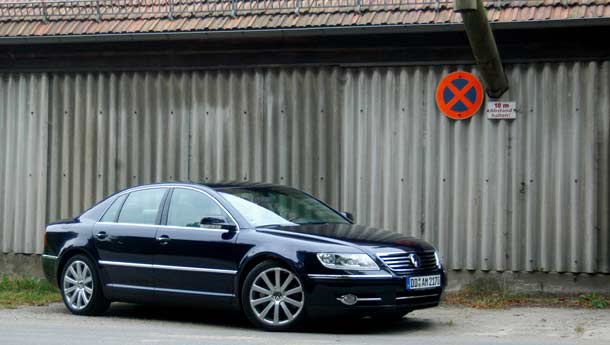 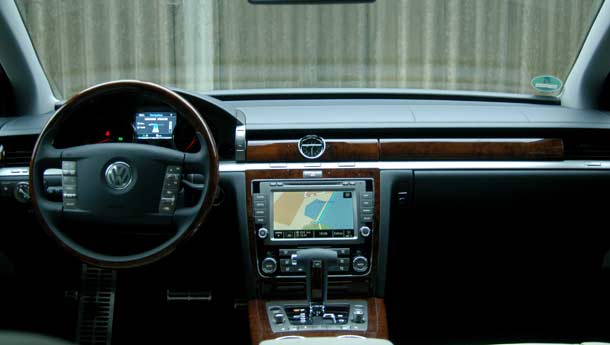 The speedo needle is flickering in the upper regions of 220 kph and the road ahead is Casanova straight, has a faultless surface and my lane is devoid of any traffic. Push my right foot down any more and the sole of my shoe might scrape onto the front wheel. The needle is still moving to the right till it begins to settle around the 230 kph mark. Then, the type of sections that the world’s fastest roads are so proud about ends, and since overspeeding fines are steep and your license is apparently wrested away, I bend over backwards and settle at a pace befitting the stipulated 80 kph speed limit.

Driving on the autobahn is awesome and exciting. Unless you’re behind the wheel of the flagship Volkswagen, the Phaeton. Though that might seem condescending, it isn’t. VW went out to build the numbest car known to mankind, and they are sure that many a Richie Rich would spend top dollar to get one of these into his personal parking lot. Seems like quite a paradox, doesn’t it?

Glance at the Phaeton and you can see how under-designed it is. It is built like a proper Panzer, but looks as inoffensive as possible. Simple is good, the Germans believe, and that should make you want one, it seems. Opulent Indians who can afford this S-Class competitor want sober automobiles; something refined that doesn’t scream for attention like a political party canvassing for the elections.

But VW didn’t ask me what I wanted from a premium segment car (predictably, since I’m light-years away from being a member of the intended target customer group), and they went right ahead and did what they do best — build a grand factory to make sober cars costing top dollar. But the Phaeton isn’t hollow gold, really. To get under the skin of this car, you need to think differently. You have to steer clear of the common stereotype that moneyed folk are brainless and classless twits who date women with more silicon in them than that valley in north California. The Phaeton is a car that few would understand, much less aspire to own, and that suits them well enough. The glass factory in Dresden, also called the ‘Transparent Factory’ produces a hefty 24 cars a day. The time taken to fit the windshield on the Phaeton is probably longer than that taken by a Japanese factory to completely manufacture 24 cars, half a dozen tubas, some karaoke machines and a minivan.   Sit at the back and you begin to realise how much you appreciate that vacuum. The lack of road noise seeping into the cabin creates a silence that hurts your eardrums. Drive over an expansion joint on a bridge and the suspension irons it all out. Your seat feels like a down-stuffed mattress but this is the sort of car that demands you hire a chauffeur, because sitting anywhere else but on the back seat is doing gross injustice to the Phaeton. Sure, you don’t have 18 different adjustments for your rear couch like the ones in front do, but they’re not needed, really.

So while you’re running your multi-billion dollar empire from the rear seat, the airconditioning keeps you as cool as a cucumber even when the going gets white hot. The aircon louvres open up like the stage curtains of a grand auditorium, which is quite dramatic, really. Also, the draft-free cooling system is so designed that it prevents your eyes from getting bloodshot due to the blast of the airconditioning after a long drive. Well, yes, the Phaeton has so many little things that go into it that they’re close to impossible to list out completely.

The theatrics don’t just stay indoors. The Phaeton is fitted with sensors that detect vehicles that are in the blind spot in your rearward field of vision. When it detects something, small lights mounted on the side rear view mirrors light up. Which mirror lights up is dependent on the side of the car that the offending vehicle is on. For example, if there’s a moron clinging to your starboard, the left mirror LED will glow. I tried to gauge how effective this system is, but the side rear view mirrors are so well designed that not once did I miss out on any car that the system picked up later.

Although it’s almost certain that the radar won’t be offered here if at all the Phaeton makes it into India, it’s a great thing to have. What it does is that it measures what the proximity of your car is to the vehicle in front of you. If it is less than the distance that was pre-determined and set by the driver of the VW, the system activates the brakes to lesse n the speed, to widen the gap between the Phaeton and the vehicle just in front.

Driving the Phaeton is a pleasurable experience. No, it’s not exciting to drive; soothing and relaxing is more like it. But look at it this way, it’s meant to lug around corporate head honchos and heads of state, not speed junkie youngsters out for a tyre shredding drive. The steering wheel feels a tad numb and the 3- litre V6 diesel, with all its 238 bhp of power and 50.8 kgm of torque, is good for about 200 kph with ease. Although VW claims a top whack of 240 kph, it takes its own sweet time to get to any speed close to that, and off the autobahn, it’s virtually impossible to hit without running out of road.   The ride is brilliant, predictably, and the car rolls over road imperfections with the grace of a ballet dancer. It could be different if driven on Indian roads, however, since the undulations on German roads are, well, just undulations and not the craters on our roads that resemble the ones that are caused due to anti-tank mines going off.

What’s spectacular about the Phaeton is its handling, which totally belies its rather bland exterior. The thing will stick to the road, and go precisely where you want it to even when you’re whizzing at over 180 kph. The confidence it imparts is awesome and suddenly, all you want to do is leave the arrow straight autobahn and head towards the twistier back roads. Such are the enormous boundaries of the Phaeton’s handling and dynamic characteristics that it’s virtually impossible to bring the traction control into service. However, notice that I’ve prefixed the ‘impossible’ with ‘virtually’. The reason of course is that the Phaeton is a four-wheel drive sedan, which makes it that much more sure-footed. But VW has given 4WD for a reason — because it’s not a rear-wheel drive car unlike the competition, the Mercedes S-Class and the BMW 7 Series.

The question that crops up at the end of all of that is, if at all VW gets the Phaeton here, should you buy it? Well, let’s tackle that question with a series of short questions with even shorter answers. Would being seen in the big VW bring about an image of opulence and great power upon uninitiated bystanders? No. Would the Phaeton open up hallowed doors like a big sedan with a certain star on the bonnet would? Er, I don’t think so. Does looking at the Phaeton make one weak in the knees and drench ones shoes with drool? Not really.

So there you have it, the Phaeton is great if you’re well-heeled but would like to keep that fact to yourself. Now, there aren’t too many of those types around, I reckon.