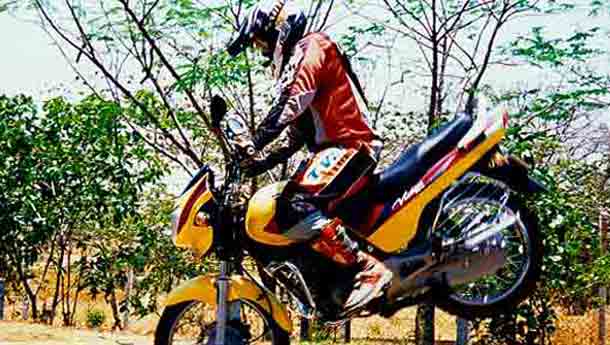 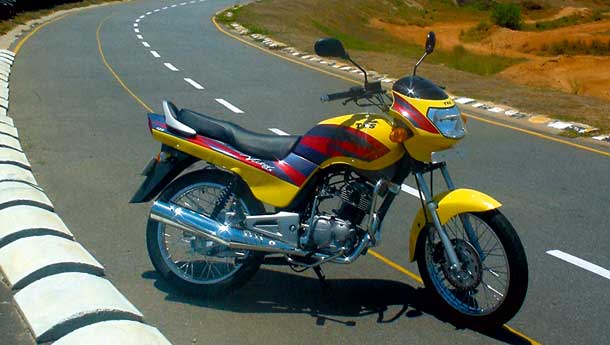 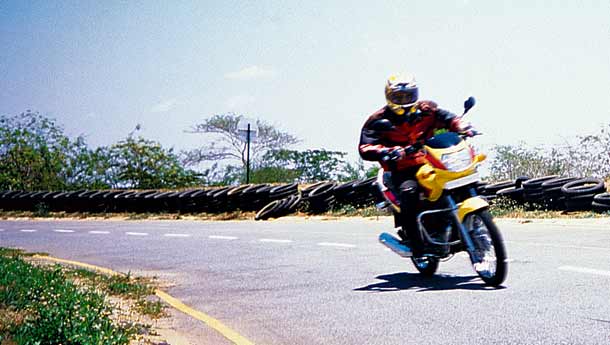 You’ve met John Rambo, I presume. Yes, I do mean dear old Sylvester. Macho and cool, laying waste armies of opponents. Without the need for undue drama or facial expression. Like a slick, well-oiled machine. And Rambo came with his own advertising agency. I refer to Colonel Tratman (played by Richard Crenna), who is given to mouthing hard-hitting one-liners like, ‘I didn’t come to rescue Rambo from you. I came to rescue you from him.’

Entire oceans of verbiage are being dedicated to the introductory part of our TVS Victor GLX riding impression. For those wondering why, it is because I thought Rambo and GLX (pronounced Glux. Noun, usually proper. Abbv. Means bigger, better etc.) were extremely similar in character and differed crucially only in two areas. Let me explain.

The Victor GLX is more than just the bigger, beefier cousin of the light’n’slick Victor GL. The 125cc engine is new, incorporating the VT-i system that debuted on the Centra. To nip neatly through the heavy technicals, the VT-i engine attempts to boost fuel economy from three different directions. Friction (or wasted fuel) is cut down by roller cam followers, thinner rings and a tin-alloy coated piston (which reduces scoring and other run-in related problems with bore-piston seating).

Fuel wastage on the trailing throttle is stopped by a solenoid valve that opens when the throttle is closed between 2,000 (too close to idle below this) and 6,000 (you’re obviously not worried about fuel economy beyond that). This, says TVS, comes close to the way fuel injection systems shut down injectors when the foot is taken off the loud pedal.   And most importantly, the spark plug, like the postman, fires twice. While the second spark fires exactly at the same time (in degrees of crank rotation), all the time, the first spark varies heavily. It fires very close to the second in the warm-up phase to heat engine oil to past 40 degrees. During the actual running, the difference varies with the load and riding conditions and there are the usual power and economy ignition maps. The second spark burns all kinds of things, from gases missed by the first spark (usually when cold), to mixture that is put into a circular movement by the first spark’s wave front.

The result is XX kpl. No, that isn’t a sub-editing oversight, TVS is still not claiming an official consumption figure. However, 60-65 kpl in regular, daily use is expected.

How is that like Rambo? Can you remember him eating? In any of the films? The increase in capacity must necessarily come with a power hike. So while built to the fuel economy brief, the GLX does manage all of 10 bhp at 7500 rpm, with torque peaking just a thousand rpm earlier. It isn’t as powerful as the Wind or the Ambition, but only a back to back test will tell you the whole story. The pleasant, all-up gearbox allows you to play with an engine that never baulks, or hesitates. There is power from the very bottom. You do have to wait till the revs cross 4000 for the full monty, though.

The power build-up is very linear and only at about 8500 rpm does the engine begin to make more noise than thrust. Like the Centra, the engine feels eager and liquid and has no vibes or refinement related issues. In fact, in Rambo-like fashion, the engine is a trusty, reliable unit, which will always do what it’s told. The chassis package is hewn from the same rock. The 60 mm longer wheelbase, new steering geometry and very nice, new, Ceat tyres come together in a solid handling platform. The typically TVS agility is very much intact; leaned right over, the GLX feels like nothing could upset it. The ride quality too is pretty good, without being unduly soft.

The brakes are truly awesome. The 240 mm disc offers great power and returns excellent feel. Like Rambo’s all-purpose combat knife, the brakes will slice off any precise amount of speed you care to lop off. When I loaned the test machine to G Prasad of the TVS Racing team, he stoppied it repeatedly until the seat mount bolts began to fall off!   On the features and ergonomics front, the Victor GLX comes loaded. The switchgear is all present and correct, as are all the meters. If you do buy a drum version, the tacho will be replaced by a clock-tower size fuel gauge. And as far as tell-tale lights go, the smart console has fewer lights than most Christmas trees, but only by a small margin. In addition to the usual power/ economy mode lights, the solenoid valve triggers a big green light. In effect, doing and also seen to be doing its work. The bar-seat-peg setup is pretty good and the firm seat should offer good comfort over long rides.

Which brings us to the styling. Admit it, Stallone isn’t the handsomest of muscle-bound cine stars. Neither is the GLX. The finish level on both is pretty good, but the GLX’s styling could have been better. The rounded tank is nice, but the lifted-from-F2 tailpiece and tail lamp are just too close for comfort. Similarly, the headlamp shape is reminiscent of the Centra and the Passion and the decals seem to have come off the Hero Honda ‘+’ models. There are nice details like the chrome bar ends (if that is your type of thing, I mean), the slick subframe for the passenger footpeg and nice chrome turn indicators.


But fun and games apart, the Rambo analogy wasn’t pulled out of thin air. You see, in a very Rambo-esque fashion, the Victor GLX is bulletproof. It does everything a respectable 125cc commuter should do. The engine is eminently functional, it feels friendly to use and should deliver on the fuel economy expectations. The chassis package is well-sorted and as Prasad proved, it is even up to stunting. It comes close to being a near-perfect commuting machine.

This is where I have the first of my Rambo versus Victor GLX divergences. You see, while the Rambo films are good fun to watch, over and over again,the TVS Victor’s charm, purely from the riding enjoyment viewpoint, is short-lived. You will probably go from I-just-bought-one to I-only-use-it very, very quickly. You will be happy with it in your garage, but you won’t get all jumpy and excitable when you talk of it. In the exact way that Rambo declares his love for the Vietnamese lady in one of the flicks, you’ll refer to your Victor GLX. Cult film? Yes. Cult bike? No.

The other divergence is one of celluloid versus reality. Rambo will always be a charismatic, macho screen image. The Victor GLX is about to become reality. Expected to hit the streets in early May at about Rs 45,000 on-road for the disc version, the Victor will go head to head with the Wind and the Ambition and the battle should keep us entertained. Until the First Blood Part Three comes around. Big Red, never forget, is just around the corner now.