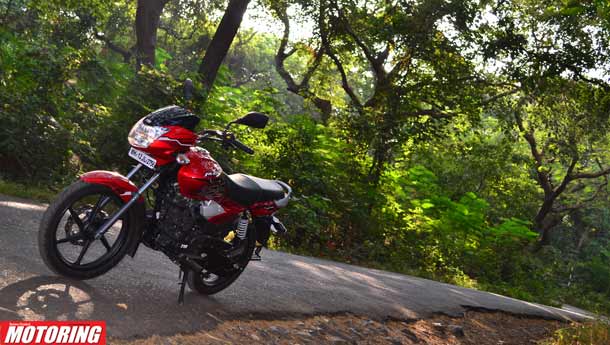 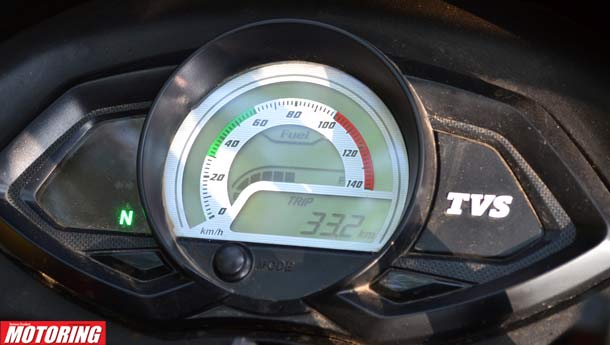 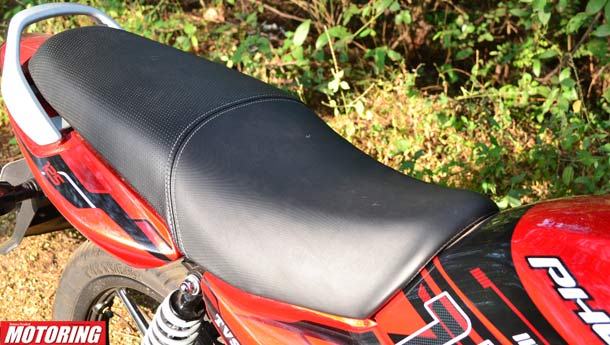 PHOENIX?
Well, you know, since the Flame was more or less extinguished by the time TVS’s legal battles with Bajaj over the twin-spark application ended, it’s successor rises from the ashes, like the myth. Of course, it’s not us saying it – since TVS named the Phoenix the way they did, they’re automatically suggesting that its predecessor crashed and burned. Well, at least they’re honest.

THE GOOD STUFF
Let’s cut to the chase: it’s a frugal, comfortable, economical commuter. It’s job is to ferry executives to and fro through dense urban traffic, day-in and day-out, comfortably and economically. With that objective in mind, it is quite a performer. The 124.5cc single makes 10.8 bhp along with 1.1 kgm of torque. The torque comes in nice and early, and off the line it feels peppy. Though nothing extraordinary, it accelerates reasonably well all the way to 80 kph. The numbers reflect the same – from standstill, it will hit 40 kph in 3.3 secs, 60 kph in 6.8 secs and 80 comes up in 14.7 secs. It’s got a reasonable amount of punch on tap below 80 kph and the gearbox-clutch combo complement it nicely with a smooth, positive action. It manages to pull cleanly, though not strongly, from as low as 25 to 30 kph in top. At a very commuterish 60 kph on the ’bar speedo, everything comes together just right.

The comfort factor is right up there. The rear suspension is a clever dual-spring shock absorber that promises better ride, stability and traction, and it provides excellent ride quality over some pretty bad patches. But since it’s such a soft setup, it still does tend to bottom out over the really rough stuff. Ergonomically, the seating and the riding position is well-sorted and roomy, with the plush seating being the highlight. Another forte is the handling. In the city, the light steering makes the bike effortless to throw around. If you keep the speeds realistic, it holds its line well, the tyres provide reasonable amounts of feedback in the dry and it’s just a delight throwing the nimble Phoenix into corners.

As a whole and in the details, the Phoenix feels like someone has spent time looking over every part of the motorcycle, optimising the way it will look, feel and perform. The equipment list has it all for the segment – dual-rate rear suspension, alloys, a nice disc brake unit, digital meters, hazards (a first) and most importantly, a funky decal set. And once you get over the fact that the design is very much like the TVS Star series, it doesn’t look too bad for a commuter, does it? Especially when spruced up with snazzy graphics and bright colours. When you look deeper, you’ll notice that the paint finish is great, just like the build quality and not once will you point at something and say ‘Cost cutting! Hah!’.


THE NOT-SO-GOOD STUFF
Vibes. At city speeds, it’s just fine but at state highway speeds here in India for this class of motorcycles – essentially, 60 to 80 kph – the vibes start intruding through the ’bars and the pegs. If your commute involves a highway, it’s going to get to you. Secondly, it’s punchy off the line but since it’s geared short for the city, it struggled to go past 97 kph on the data logger. I would like to tell you what the indicated speed was but I can’t because in bright daylight, the bar speedometer’s readability is an issue.

When you do manage any sort of reasonable speeds, you will notice that the bike sorely misses a 5th gear. That one added cog would’ve calmed the motor down at highway speeds and could’ve helped with the economy as well, enough to offset the additional cost. Right at the limit, there’s also a pronounced weave, a side-effect of a compromise the engineers had to make with a city-friendly short wheelbase chassis.

YOU SHOULD BUY IT IF
...you’re over the 100cc crowd and want a well-built, well-equipped, frugal, comfy commuter that will transport you around with no stress. Whether it’s fast or not matters much lesser. Of course, you want all that at a value-for-money price point and the Phoenix checks all those boxes, including the last one ‘coz the price tag reads Rs 53,000, ex-showroom, Chennai.

YOU SHOULDN’T BUY IT IF
...you want something sporty. This isn’t.