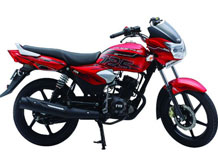 TVS Motor's Indonesian arm, PT.TVS Motor Company Indonesia, is looking at entering Laos, Cambodia, Malaysia and Turkey in 2014-15. TVS Motor also plans to launch a 125cc sports motorcycle and a superior skubek (scooter) in Indonesia this year. In FY14, PT TVS entered the Myanmar market. Its annual report says it sold 19,200 vehicles, three per cent more than in the previous year. Its domestic sales grew 12 per cent but exports were lower by three per cent. During the year, PT TVS exported 10,300 two-wheelers. The skubek category now accounts for 63 per cent of the two-wheeler market there. During the year, PT TVS launched its first skubek model, TVS Dazz, this year.

The parent company, TVS Motor, said its research and development team had delivered a motorcycle specifically tailored for the African market.

TVS Motor said it expected only modest growth in India for the two-wheeler industry in 2014-15. It expects low economic growth to continue; an uncertain monsoon is an added concern. Inflation and consumer sentiment do not induce great confidence either. Also, geopolitical uncertainty in parts of Asia and Europe might affect commodity prices.

Yet, long-term prospects for the two-wheeler industry continue to be attractive. A slew of new launches, of motorcycles and scooters in 2014-15, are expected to further strengthen the company's presence, it said.