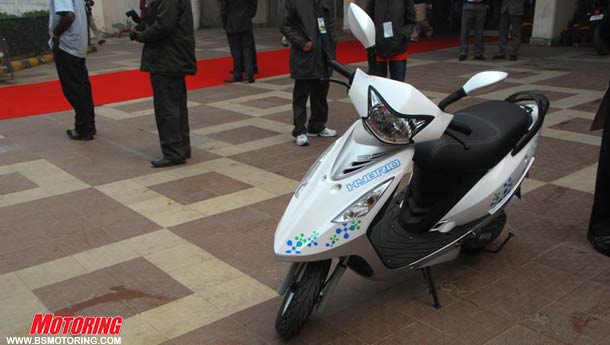 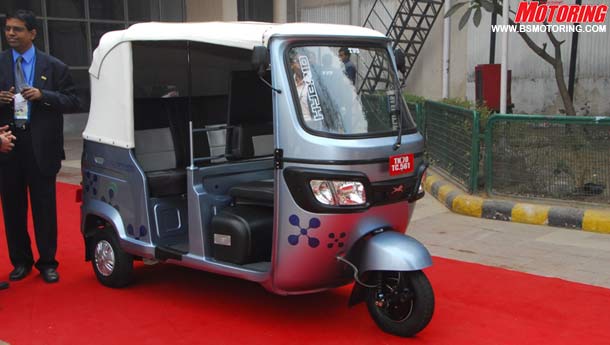 Since the whole world has gone bonkers trying to reduce pollution and bring down oil consumption, why shouldn't our home boys join the fray? And well, TVS has gone ahead and done just that.

If you're at the 2010 Auto Expo, head down to the TVS stall to check out their new hybrid vehicles. Scooterists, the TVS Streak Hybrid is just the thing for you. With a four-stroke engine coupled with an electric motor, long rides are a distinct possibility. This is because, unlike the current crop of purely electric vehicles, the Streak's range is not limited by the juice left in the batteries to power the electric motor. The rider can utilize the electric motor for short trips and on longer rides, the petrol burner can be employed in conjunction with the electric motor. Regenerative braking improves things a bit by re-converting energy employed during braking, otherwise lost as heat, into developing some electricity to help re-charge the battery. Start-stop technology makes its presence on the Streak as well, making it even more efficient. The Streak is currently under testing and might go onto sale by the end of this year or early 2011.

Three wheelers are a major constituent of any Indian city's traffic and those things can really be smelly and smoky. But TVS has a solution to that and it's on display at the Auto Expo. Called the King Hybrid, the TVS is claimed to be the world's first mild-hybrid plugin CNG 3-wheeler. What all of that basically means is that its got an electric motor coupled to the CNG burning engine. During sudden acceleration conditions and while climbing inclines, the electric motor is used to supplement the gas burner. TVS claims that this brings down the CO2 emissions by 22 per cent and NOX by 20 per cent. Regenerative technology is also employed in the King Hybrid and the total reduction on fuel consumption by employment of this technology is a claimed 30 per cent.