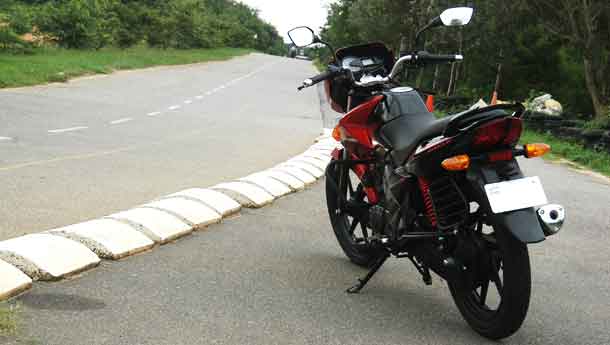 I’ve got to end all doubts here by saying that this is the best looking Indian motorcycle ever. Yes, Shumi, even better than the Apache RTR160. There have been a few good lookers like the Apache with its sporty front end. The CBZ-X looked brilliant with the front hidden and the Pulsars... well, looked like Pulsars. Then some inspired designer bloke at TVS was handed a design brief that said, in big bold letters, ‘Beat everything’. He closed his eyes, put his hand on his chin, thought a second and sketched up a few drawings to pull a rabbit out of his hat, or in this case the Flame off the drawing board.

A quick run through the little bits and details before I go on and you’ll understand what I’m on about. The bikini fairing resembles a toned-down version of the SuperDuke’s face, with its edges neatly rounded off and widened but still retaining very sharp styling cues. The tank, on the other hand, is a work of sheer ingenuity. We Indians are constantly lugging things around, so the designers decided to build us a little mineral-water-bottle-sized cubby hole into it. While doing so, they’ve allowed themselves a number of options when they decide to upgrade the Flame, instead of just a mere sticker job. The same goes for the rear cowling. The grab rail is a matte finished futuristic design, complemented neatly by a twin bulb split down the centre tail lamp. What really catches your eye when you glance at the Flame from the rear is the very sporty looking triangular-shaped exhaust can, just like the one on this year’s GSX-R1000. It’s a crying shame that this beauty only displaces 125cc. It could easily pass as a 250cc single, no?
The Flame is TVS’ all new 125cc motorcycle for India. Yes, I too wish it were a bigger displacement engine, but what to do? The engine is an all-new three-valve unit that’s built from the ground up in collaboration with AVL.

The difference, though, with this engine is that the airfuel mixture is let into the combustion chamber through two different inlets stacked one above the other. As the carburretor slide rises, the lower inlet (called the swirl port) opens, sending a turbulent charge into the cylinder, enabling efficient combustion and hence better fuel economy. As the slide rises past the half way point, the second intake is activated (called the power port) which sends a surge of extra charge in to the cylinder, enabling the engine to achieve better top end power by higher flow rates. TVS calls this CCVTi. The engine uses two spark plugs, which is the reason for the raging IPR/patent debate.

The Flame’s got an eagerly buzzing 125cc motor. The engine note wasn’t yelling, but it was loud and sounded like it was fairly high compression. TVS said that the final product might land up being a lot quieter as it wasn’t in its final state of tune yet. And might I add that this 125cc motorcycle could give some larger capacity motorcycles a run for their money in a flat out drag, as the speedo stayed over the 100 kph mark throughout the length of TVS’ test straight. And it’s only got four cogs to positively click its way through the box.

Another first of sorts with the Flame is the fact that it’s built around a single down-tube cradle type chassis with a twin spar like construction. It was more function over form as the engineers wanted to incorporate the cubby hole into the tank. TVS also strapped on gas-filled adjustable shocks on the rear to build quite a clean handling motorcycle. My one crib was the rather upright footpegs (TVS promised to change that) which kind of curbed my cornering enthusiasm. The ride was firm, but not hard, and the seat was comfortable too. (I’ve never liked TVS’ perches).

The Flame, TVS promised, will be launched by the end of the year with a competitive price compared to the other motorcycles in this segment. Honestly, I wouldn’t mind even paying a premium on it just for its sharp looks. Then I’d try and bolt  an Apache engine into the frame. To my drawing board, then.