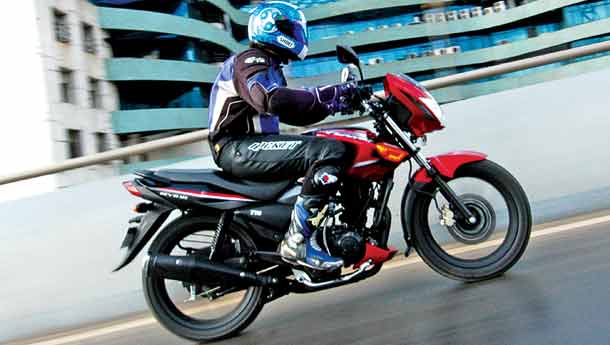 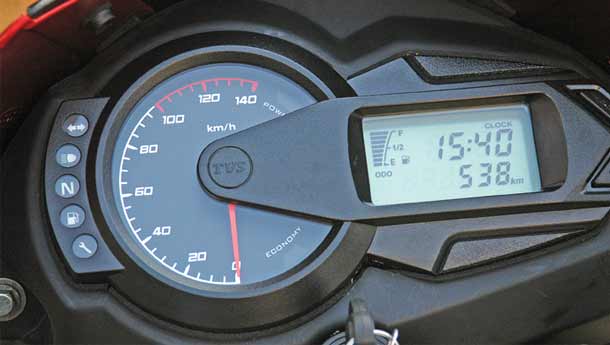 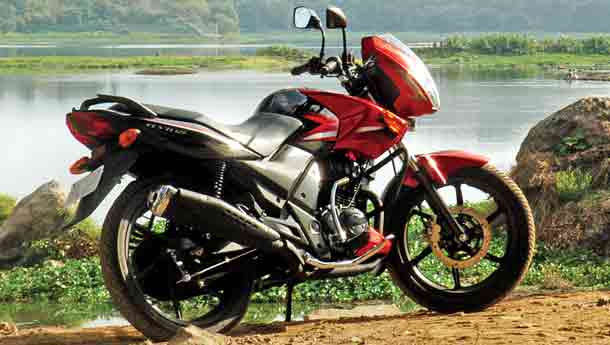 It wasn’t going well. I’d only just got the TVS Flame, and for once, we decided to get the photography out of the way before we put it through the test cycle, through performance runs and so forth. And not only had I almost crashed twice trying to get a half-decent stoppie out of the bike, I was now acutely aware of the greasy sensation that says, ‘You just lost the front, buddy boy.’ Blame slow reflexes or praise great machine control, but I did get something right. Which is probably what saved the slide. The TVS Flame did recover, no, I didn’t push it back up like Colin Edwards or any such. For a moment or two there, it teetered on the brink of the ‘smash Shumi to little bits’ line before recovering calmly like nothing happened. An unexplained 220 bpm from beating heart and an innocent looking TVS that says, ‘I didn’t do it.’

Okay, first of all, I’d like to clear something up. If you look at the test times, you will notice that the times aren’t all that great, especially the braking numbers. I’d like to clarify that the numbers are an anomaly caused by a damaged front tyre. Initially, we were a bit surprised at the lack of feel from the front, its constant threat of sliding right out too early and its inability to grip the road under really hard braking. Later, we found that the tyre, probably during transport, had suffered some sidewall damage. Unfortunately, we didn’t have time to score a fresh front tyre. But I promise you fresh test numbers once we get a new front tyre. How ruined were the tyres? The braking times are in the same region as the drum-braked Access on our test bikes. Thankfully, BSM has ridden three other Flames before our test bike and we’ll use that as a basis to work around any damaged-tyre related problems. Sorry about this. To the Flame, then.

Let’s start from the usual place, the look, name, fit and build. I like the name, although that tag line is just too cheesy for words. ‘Aag lagegi?’ Please. Pyromaniac woulda sounded better. Anyhoo. The styling is cheeky for a humble commuter and the KTM-ish squared off lines do look rather good. Even in traffic, between the flush-mounted indicators and a distinctive bikini fairing, the Flame got a lot of attention. Good job there. Fit and finish are good too, but the plastic lid on the tank cubby hole feels like it’d scratch easily and the sidepanels are a fair fiddle to open. You want to check battery fluids? You’ll need time, patience, a screwdriver, a pan for a bunch of screws and then some. That said, build quality is TVS-typical good, and nothing will rattle easily on this one.   But on the performance front, the Flame left us a bit um, underwhelmed. First of all, the numbers are all right, perfectly in the ball park and all that. As in, 6.8 seconds to 60 kph is decent for a 125, as is the 95 kph top speed. But just listen to that motor. This has to be the least TVS-like TVS motor ever. It’s nicely throaty down low, but when the revs build up, it’s thrashy, noisy and sends vibes into the handlebar as well as the pegs. Ride a Honda Shine next to a Flame and you won’t even hear the Shine. As Bijoy once said about Ferocia, my blue RD, it makes a lot more noise than it does work. Which is kind of strange, because the RTR 160’s motor is absolutely great, and this one is very um, okay, and they’re siblings!

Ride quality, on the other hand, is pretty good – it feels ready to absorb with a hint of sporty. Bombay’s concrete joints (as in, repetitive, small but sharp bumps) are the only kind of bumps that get through with any sort of flair. Everything else is handled and kept away.The brakes are good as well – the callipers bite down well, and while (again) I’d like more feel from them, they’re a sharp kitchen knife rather than a surgical razor. The TVS-typical agility, marginal twitchiness and thrilling cornering are all built into the chassis. But the rubber refused to come out and play, which threw a spanner into the testing works. Again, I’m not convinced that all the TVS Tyres are like this – the three other Flames we’ve ridden had the same tyres and were far, far better in feel.

I do have a bone (or two) to pick on other counts though. TVS has made some rather interesting choices with the Flame’s spec. For instance, for a sporty pyromaniac of a commuter, it doesn’t have an engine kill switch or a tachometer. But it does have that cubby hole, which I’ve come to really like. On an average ride, I’d stuff the manual, toolkit, first aid kit, my wallet, my fat phone, a fat perma-marker, registration papers and still have space left on top to stuff a full-size used dhoti (the best lint-free cloth you’ll ever wipe a bike down with, believe me).(Lies! Shumi’s old fashioned, it’s out of the riding kit and straight into a dhoti for him, heh heh – Kyle). I like the ease with which the seat unclips to allow you to access the stuff underneath, but since the sidepanels don’t have locks, you have to unscrew a rather large piece of plastic to do something simple like checking the battery electrolyte level.

On the whole, I think the Flame is a very smart looking 125cc commuter. Hell, I think it’s the best looking of the lot, except for the nostalgic value of the Gladiator RS’ paint. But from there on, despite our tyre issues, I think the Flame is a good, but firmly middle-order 125. Which means it does some things well – handling is good, ride is good too and ditto the brakes – and there are others it doesn’t – engine refinement for one and just-class-par instrumentation for another.

As a buying proposition, I suggest you take a ride at a TVS showroom and see if you like its feel or not. Personally, I think BSM’s current class favourite, the Yamaha Gladiator RS, should not be worried. And neither should the class performance king, the Disco 135 and the class refinement king, the Shine.