TVS Centra vs Hero Honda CD 100 SS - None the miser 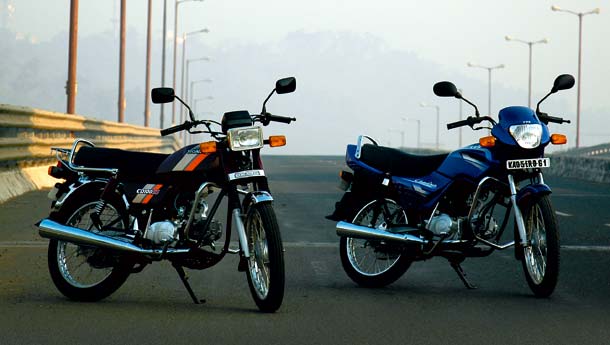 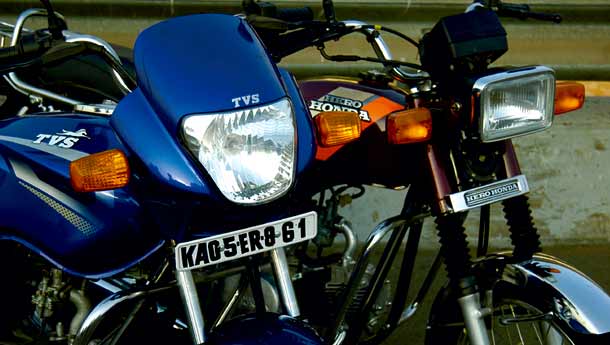 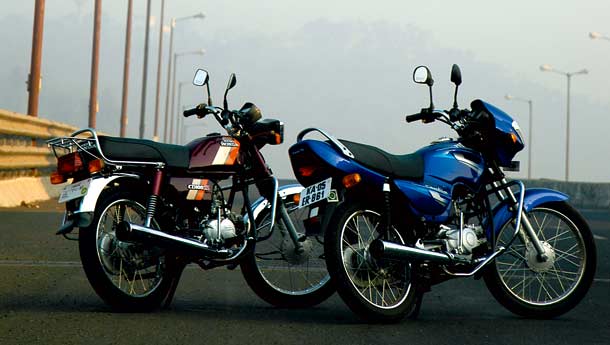 Love all is more than a cry of equality in tennis. In a more metaphysical context, love all means being attached to all manner of things, without any distinctions. Should you subscribe to that motto, you should be able to love all kinds of motorcycles. Even plodding, economy-minded ones.

As a direct consequence, I didn’t have great expectations from this particular comparison test. 100 kpl TVS Centra? Versus what? A 100cc Hero Honda? Bah.

Picking the model to pit against the Centra proved a bit tricky though. We had the whole bunch from the CD-Dawn to the Passion+ to choose from. We eventually settled on a CD100 SS for three reasons. First, it comes closest to the TVS in price, second it is also the nearest to the original CD100. And it competes in the entry-level segment.

The biggest reason to choose a competing Hero Honda, as opposed to any other brand, was the powertrain. The SS and the Centra share remarkably similar powertrains. At least, visually. The TVS actually is a bigger motor, 99.68 to 97.2cc. It also makes a bit more torque. You could say the SS isn’t at par from the start. Which is true, but you’d do a double take at just how little the difference is.

On the refinement parameter, for instance, the Centra is quite the picture of slick, smooth engineering and liquid power delivery. Sort of like Dido. But the SS is no Ozzy Osbourne either. It too, is a refined unit, and has a likeable, uncomplaining nature. The Honda mill will put up with anything you throw at it with a game face. Trundle at 45 kph? Fine. Thrash at 85? Well, okay.

The Centra’s slick tune quavers past 70 kph, which costs it refinement points. Past 70, it transmogrifies into a toddler going to pre-school for the first time. It will get to its 87 kph top speed, but must be dragged there kicking, crying and screaming. Once past 80, in fact, it is hard to keep your feet on the pegs. Thankfully, I am not ticklish.


To add to the Centra’s negative scores, our SS actually shifted better! The wretched metal plate in the place of a toe-shifter on the SS is just silly, but the shifts are slick and positive. The Centra manages positive but notchy shifts going up, but it’s a moody supermodel on the way down the ‘box. Shift quality has improved since we got the almost-new test bike, but the SS was shifting better right out of the crate. As you can see, the powertrain scores would’ve been very close.   An interesting aspect of the two together is that the CD100 SS actually feels like an ancestor of the Centra, and the TVS feels like an evolved version of the Hero Honda. No doubt, the Centra engine is a technological tour-de-force. It uses a number of friction-cutting ideas. It also employs a four-map digital ignition, with power and economy maps supplemented by a map for the second spark (which follows the usual single spark) and one to bring engine oil up to operating temperature quickly. There is also the solenoid valve that allows engine vacuum to suck in only air on the closed throttle. Result? 100 kpl. At first glance. The improvement in efficiency is just 10 per cent over the competition. Not enough, given the kinds and number of technologies used, I feel. Especially since the market has enough motors that provide near-as-dammit performance to the Centra motor.

What is eminently likeable about the Centra mill, however, isn’t the technology or the numbers – that would be the strong hint of old Fiero present here. No, not the F2, the first one. There is a burble in the note and an eagerness in the revs here that we loved in the Fiero. The Centra, in a word, has it.

What it doesn’t, is a hefty performance advantage. The Centra races away to 60 kph a full second faster than the CD100 SS. Again, I would have expected a bigger margin of victory. And all the technology, promoted so well and so forcefully, comes to nothing when the Centra is shown an auxiliary fuel tank and a measured quantity of fuel. The SS is a steady performer. Our worst figure was 58 kpl, while the best was 69 kpl. In regular urban traffic, the CD100 SS returns a perfectly acceptable 65. This figure is also a good approximate of what the Splendor+ and Passion+ would manage.

Testing the Centra’s fuel economy bought about an ‘Akhtar to Tendulkar from the Pavilion end’ sort of hush. It turned out to be a no ball. On the highway run (65 kph cruise, few near-top speed overtakes), the economy figure was just 55 kpl. In heavy town traffic, the figure jumped to 61 kpl. Medium traffic pushed the figure to 68 kpl, which is our overall consumption figure. We then set out to see what we could do to touch the magic 100 kpl. As it turned found out, nothing. Riding like a complete jerk, refusing to shift out of fourth gear, not touching the brakes, keeping the speed between 38 and 42 kpl, we recorded our best figure yet, 73 kpl. Forget boring, riding like that is just plain dangerous. You might just be rear-ended by an Atlas SLR.

Just so you know, 68 kpl, is exactly the figure we noted for the TVS Victor. And just so you know, the Centra with its super-duper, ultra-high, new fuel economy will never show a clean pair of heels to any other 100cc machine. And that, is before you throw the new 8.2 bhp Boxer CT into the fray. That should be quite a toss up. My seat-of-the-pants stopwatch says the Boxer is at least half-a-tick quicker to 60, so all it needs to do is produce a regular fuel economy figure. Anyone smell cooked goose yet?

Fortunately for the Centra, the chassis is apples and oranges. The SS uses the original pressed-steel spine, while the Centra has a brand-spanking-new double cradle. The Centra’s advantage is consolidated by superb Ceat Secura rubber, which give the stiff but middling chassis greater cornering ability. The SS complains through corners and is further hampered by budget tyres. The equation would change, albeit slightly, if a double-cradled Splendor+ or Passion+ were to replace the CD100 SS. The Centra would still win, but the margin would be much slimmer. What would net the Centra points is that it can be fun, while the two Hero Hondas would just about put up with it.   The ride quality points, if there were any, would be even. The Centra is the plusher of the two motorcycles, with a soft supple ride. The CD100 SS is a more firm sort of customer, built to handle harsher terrain. But the advantage is annulled by the Centra’s inability to smooth sharp-edged bumps. Whenever either end passes over one, the TVS turns it into a sharp spike that goes right through the rider.

But peg-scraping isn’t the game these guys are supposed to play. What the Centra excels at, and I mean over the entire bunch of Indian motorcycles, is traffic. This is the absolute best traffic-carver I’ve ridden through Mumbai roads yet. Forget the SS, most other two-wheelers would have trouble matching the way the gearing, the power spread and the Fiero-ish bottom-end energy come together in traffic. Awe-freakin-some, but will this statement stand once the Centra is pitted against the Boxer CT? The Boxer is definitely the more planted of the two and the Centra, like most TVSs, does get a bit lively once the winds rise, or when large vehicles overtake.

Which brings us to the looks. Park ’em together and there is no mistaking the older and the newer machine. The uglier machine, however, is a much harder call. The CD100 SS isn’t pretty, but then, neither is the Centra. The Centra in fact, while sporting great finish, looks a bit top-heavy, with overly large body panels striking an almost Cartoon Network style contrast to the super-thin rubber. Er... Centra styling isn’t for me. And the CD100 SS at this price level is just too basic. So we’ll have to call it even. Who wins? Do you even have to ask?

The TVS Centra is the clear winner. But, the Hero Honda CD100 SS isn’t the loser here. It performs admirably for a machine that has received little more than updates over the fifteen years it has spent in showrooms.

But TVS’ oh-so-close design does raise questions. This is their first horizontal engine, with even their usual all-down shift pattern discarded in favour of a Hero Honda-spec all-up pattern. Do huge sales, for one, have to mean the competition must forget their strengths and play to the gallery? And if everyone were to make exactly identical products, I’d be buying the strongest brand, won’t I? Which, in this particular case, would be Hero Honda. The closer you go to resembling a Hero Honda, the more harm you might do yourself.

It is just pure misfortune that the blameless Centra is caught in the melee. I could find a hundred arguments against what it stands for, but I genuinely like it. Until you push its envelope, it is perfectly happy to deliver whatever you ask. It is also able to enjoy being ridden for riding’s sake and is an absolute gem in traffic. Hot knife and butter come to mind.

But at Rs 38,800 ex-showroom Mumbai, this is a seriously expensive motorcycle. There is a Scooty Pep sort of logic to it. TVS claims the Centra is an execommuter, but that argument I am not buying. It just doesn’t have that kind of grunt. Should you buy one? Get a Victor instead, it will give you the same fuel economy and more of everything else. For only about Rs 3,000 more.