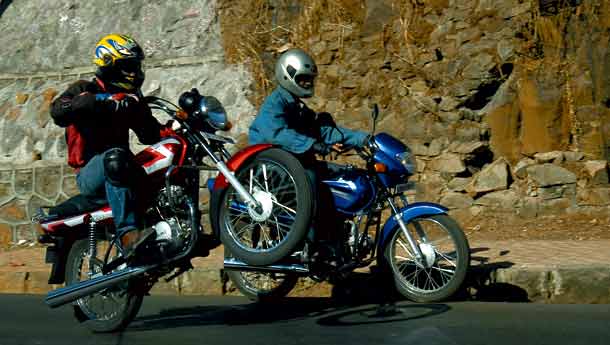 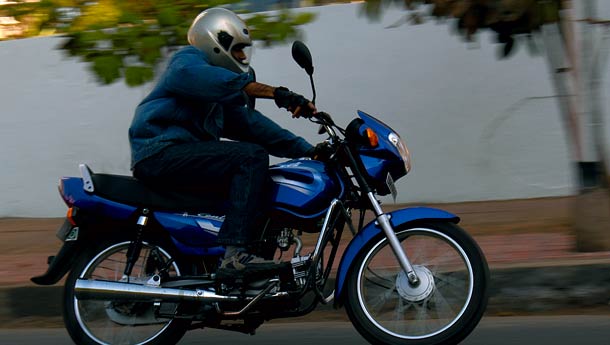 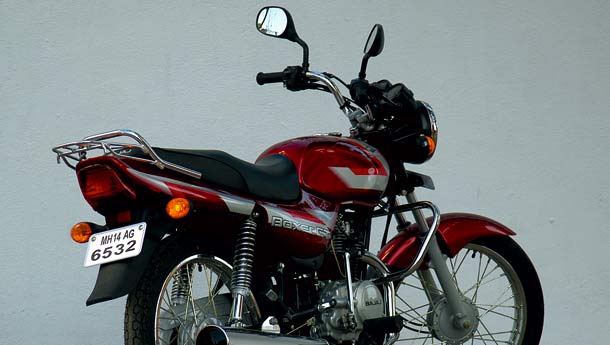 A job description is a pretty straightforward thing. It lays out the rules and regulations and tells you what you are expected to do at work. In the matter of commuters versus their users, it is a pretty short, succinct document. It says, maximum fuel economy. Everything else be damned.

However, when TVS unveiled the Centra, they moved the game on a little bit. They packed it full of technology and it promised to return the magic ton. Which in India, sadly, is 100 kpl, not 100 kph. But whisper that in the buyer’s ear and as Pablo puts it, ‘said buyer would damn near turn double somersaults with glee.’ Quite. As with all competitions, the fear that your best may be bested always haunts you, so TVS was obviously expecting fireworks from someone claiming one kpl more.

But Bajaj fired back from unexpected quarters. When they previewed the Boxer CT for us, they didn’t say 100 kpl. That, they said, could be taken for granted. They said, instead, ‘we’ve got 8.2 bhp.’

Power struggle
It is hard to argue with a powerful motor. However, the Centra does have the better powertrain here. Not performance or output, mind you, just a better sounding and feeling engine-gearbox combo. The hi-tech engine is eager and ultra-refined. The Bajaj engine, on the other hand, is a young, brash, let’s-go type. It is quite rackety, but not stressed and loves to rev, although it is quite torquey right off the bottom.

The slick Centra, however, has a very well-defined comfort zone. Push past 70 somehow, and the Centra begins to lose its composure faster than Janet Jackson loses clothes. The Boxer, loud from the word go, just gets on with the job, making quite a racket all the way. However, even with revs well past the limit, the Boxer doesn’t sound any more stressed than usual or shovel truckloads of vibes through the tank, grips and pegs like the Centra.   Nip & truck
Understandably, the quicker machine isn’t hard to spot. 8.2 bhp goes one up on 7.5 and the Centra is 0.4 seconds slower to 60 and much slower to its near even top speed. The Boxer actually smiles at stopwatches. Actually, it seems to smile all the time, but we’ll get to that later. The Centra’s power delivery comes together brilliantly in traffic, but the Boxer, without doubt is the performer. And it isn’t just a grim-faced rocket. It actually enjoys being thrashed about, while the Centra is as emotionless about it as Stallone in a romantic comedy.And the Boxer is the more frugal of the two as well. 85 kpl is easy with a light throttle hand, though you can crank up the volume and see the figure drop like a stone to 55 kpl. In regular town work, 74 kpl is easy to get.The Centra can only manage 68.  The Boxer’s sucker punch is its ability to wheelie! How
do minute power-wheelies and super dump-clutch wheelies in first gear sound? And this is a 100 kpl commuter?

Corner on the cob
A wheelie-happy machine would usually be a light-fronted nervous handler, right? Well, not quite. As Pablo says, ‘The Centra, with its superb tyres and double cradle chassis, goes around corners with a great deal of confidence, but not quite with as much élan as the Boxer which feels a little better planted. Corner-carvers these bikes are not, but the Boxer is happier when faced with them. It takes crosswinds in its stride better too, because the Centra can start to waft about. Bad roads, likewise, are a better experience atop the Boxer’s seat for both the pillion and rider.’It is the tyres that set up the handling stakes. The Centra has good tyres which help out the intermediate chassis. The Boxer has relatively inferior rubber, which inhibits an otherwise capable frame. In fact, I’ve had the front end nearly fold more than once on the Boxer and all the blame rests with the ultra-wide handlebars and the not-skinny but not-too-sticky-either rubber. Both the bikes are obviously agile and light in slow-speed work and the Centra’s handlebar, I think, helps it carve through traffic faster.

Stop  watch
We’ll just up and say it, these things don’t have brakes. Neither of the two offer very adequate retarding equipment. Pablo took both the bikes for long spins and it was always the brakes that started the conversation with witticisms like, ‘Brakes? You mean they’re actually meant to stop the thing and I’ve been wasting my time using my heels?’ The motorcycles  feel under-equipped for different reasons, though. With 8.2 bhp to stop, the Boxer feels like it is missing a disc. And the Centra just has too little rubber and too little brake.

Bit parts
What the Centra has in ample quantities are quality switches, full instruments and good ergos. And the Boxer isn’t far off. The sombre black dial with its muted idiot lights feels a bit under-detailed, but that apart, they’re dead even. Pablo says, ‘The Boxer scores with its Ride Control switch, though, which is a darn sight better than having ‘Economy’ and ‘Power’ lights flashing at you.’ This bit, I have to reluctantly agree with. I am against throttle restrictors of any sort. But in this case, I’ll make an exception. The switch only tightens up the throttle beyond a point and going fast, you won’t even notice it. Slow down and become fuel conscious, however, and it works very, very well.   Fun-dament
There is no comparison on the fun front. The Centra is as much fun as watching grass grow. Don’t get me wrong, it is a perfectly capable motorcycle. For emphasis, I’ll say it again. It is nearly the perfect commuter. But the Boxer has the edge because it is that, a near-perfect commuter, and it is also fun to ride. You smile at the burly engine note, giggle at the ludicrous wheelies and just laugh at other 100+cc bikers trying to keep up. Pablo agrees, ‘The Boxer rubbishes the claim that commuters can’t be fun, with its wheelie-happy nature. A lot of prospective fuel-savers are either going to be very surprised or scared silly when they inadvertently pop the clutch! The Centra is...well...a tad boring. It does its job exceedingly well, but if you’re smiling while riding it its because you’re thinking of fuel savings, not because of any ‘yee-ha!’ moments.’

Looking class
And the yee-ha continues on the looks front. The Boxer CT wins this easily. It is unpretentious, handsome and most importantly honest. The Centra is just ugly. Pablo thinks, ‘It tries quite hard, with its headlight fairing and stripey decals, but ends up looking bland. The Boxer gets it just right and its muscular styling, coupled with attractive decals, will go down well with punters.’

Dough, boys
As you can see, the Boxer outperforms, out-frugals, out-handles, out-brakes and out-styles the Centra. Bajaj is yet to release prices, but our unofficial sources say they’re sure the Boxer CT would be just Rs 30,990 ex-showroom Pune. Which makes it Rs 9,000 cheaper as well.

It is almost the automatic winner. But it also wins massive loads of brownie points for being fun to ride. You could buy either. However, with the Centra you will just be getting from point A to point B. The Boxer will hustle, dodge, wheelie, honk, snort and enjoy the commute. The Boxer for me please. Now, what can I do with the Rs 9000 I’ve just saved?

At the end of the day, Pablo’s in my camp too, but only just. His preferred pick was the Centra, his contention being, ‘Even though the Boxer scores over the Centra in a few departments, I would, all things being equal, still have put a down payment on the Centra. I’ll tell you why. These bikes were built for a specific purpose – to transport your derriere from point A to B with the minimum fuss, in maximum comfort and as frugally as possible. The Centra does all of these things brilliantly, and the engine sounds like it’ll continue to do so till the end of the world. The Boxer is a surprisingly good motorcycle, but it just doesn’t sound happy in traffic – the engine wants to seek out an open road and rev till its cross-eyed, plus all the noise that it makes doesn’t exactly fill you with confidence as regards longevity. However, Rs 9,000 is just too much to ignore! Bajaj have thrown an uppercut at TVS’s chin with the Boxer and they’ve    landed it square.