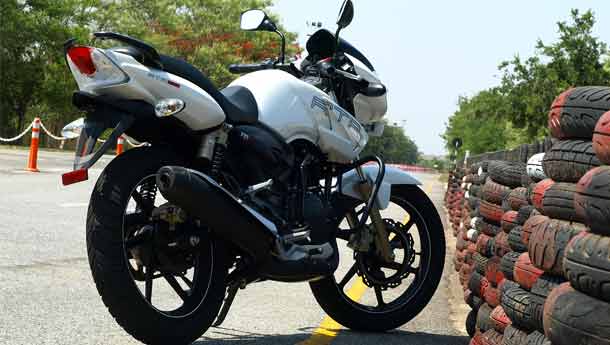 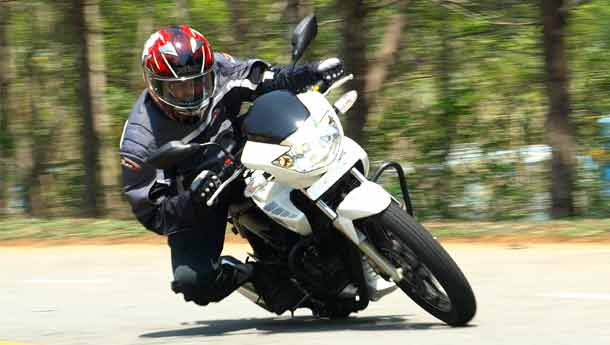 Let me be honest. When TVS invited us for the launch of the new Apache RTR 180, I was thrilled no end because I expected a different looking, scorcher of a motorcycle. I got one out of two right, which is not bad by any standards. Even before our car pulled into the TVS test track, I caught sight of the bike and almost banged my head on the window out of sheer frustration. The reason? The Apache 180 looks as different from the 160 as Mary Kate does from Ashley. Sure, there are subtly different details (if you can call the ‘RTR’ celebrated across the tank subtle!), but overall it is not as much of a change as I would have liked. Though I must admit that the pearl white colour does look rather fetching.

Those of you who noticed the ‘one out of two’ part mentioned above must be eager to know what it is like to ride the biggest of the Apache tribe. So was I, and the prospect of riding it on a track that we had all to ourselves was way too inviting. But I thought it was only polite to first find out what the changes are and I suggest that you do the same. Don’t want to be rude now, do we?

The most significant change, namely the bump up in displacement, ensures that the Apache is not a ‘cheater’ 150 anymore. At 177.4 cc, it finds itself thrown into the ring with THE 180, the Pulsar. (Dying to know what happens next, aren’t you? Make sure you get BSM’s July issue then!). It does not feature fuel injection, not yet anyway, but it does feature a bigger carburettor (Ucal UCD29) and comes with a standard 200 mm rear disc brake. In addition, the bike now sports a 1,326 mm wheelbase, 26 mm more than before, courtesy of a longer swingarm that nestles a 17-inch rear wheel. That is correct – no more oddball wheel sizes for the Apache! It gets a fatter 110/80 at the rear and the same 90/90 front hoop by TVS, both belonging to the tubeless variety. TVS says that the tyres have been newly developed to harness the potential of the bike’s chassis, but I think the tyres could have been better still. Though I never ran out of grip even when nicely leaned over, the tyres definitely did not offer as much feedback as say, the R15’s tyres. More work in this department is needed, I think.   Now for the best part of this work – riding! TVS’s test track is a simple one, but it can keep you entertained if you keep pushing yourself. It is shaped like the letter ‘P’ which I suspect stands for ‘Performance,’ though it would have been infinitely more fun if the shapes of the remaining letters of the word were also incorporated into the track design. Er, right. Anyway, as soon as you pull away from standstill, the 180 feels more impatient than the 160, and that is saying something. There is noticeably more grunt from the motor that now makes 17 bhp at 8500 rpm and 1.6 kgm at 6500 rpm. At the end of the straight, it reached an indicated 120 kph feeling considerably less stressed than its smaller brother. It makes more power everywhere in the rev range than before, which meant that grunt out of corners was never an issue. And I also picture the 180 being an even better wheelie monger than the 160.

If the extra power is pleasing, the step up in the handling is even more enjoyable. The 180 is not prone to kick you up the behind if you manage to get it wrong. Braking from 120 kph to about 85 kph to enter the longest right-hander of my life was a more stable affair than on the 160. Just before the turn tightens up, there is a conveniently positioned dip in the track. Not a gentle one, but a rather nasty one that will probably launch you into the trees if you hit it too fast. The 180 went through it without much drama, though I cannot say the same for the 160. Taking the 160 out for a spin prompted me to jump right back onto the 180 after a single lap. The 180 might squirm, but it will not spit you off, something that the 160 threatened me with into and out of the corner. The 180 is slightly slower steering, but only when compared to the 160. Picking the bike up from full lean on the right side and going into the left-handed kink took far less effort than any other bike. Against its competition, it has the edge when it comes to flickability. I feel that trading the quicker steering for stability has done the 180 a world of good. Going fast is now easier on your nerves with this one.

And soon, Apache owners will be able to go even faster. Later in the day, TVS officials announced that the company will launch a racing kit for the Apache some time in July. This is the second such kit that the company will offer, the first being for the Shogun almost twenty years back. It will consist of several go-faster parts like a free-flow exhaust, air filter, bigger jets or carb, perhaps even a high-lift camshaft. At least in terms of being a pocket rocket, the Apache looks set to make the Shogun proud. Hope they throw in better rubber too. As it stands now, the Apache 180 is a solid improvement and is the Apache to buy today. And do remember to slap on the racing kit when it comes out!