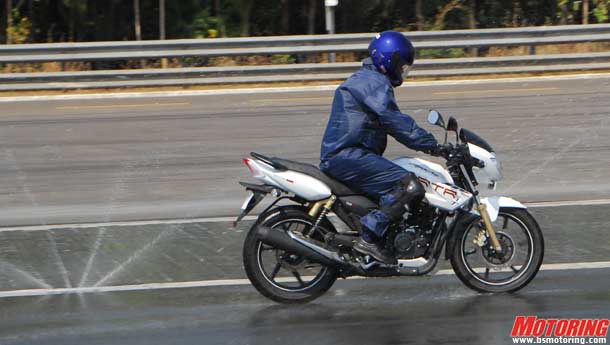 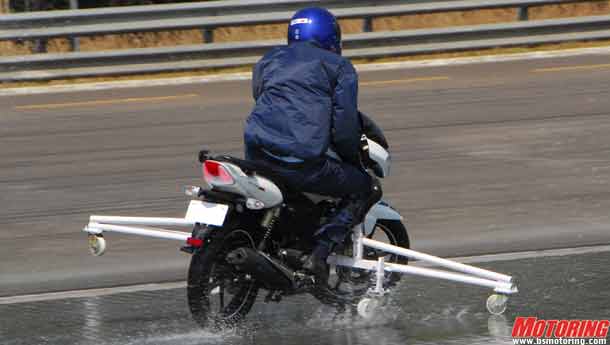 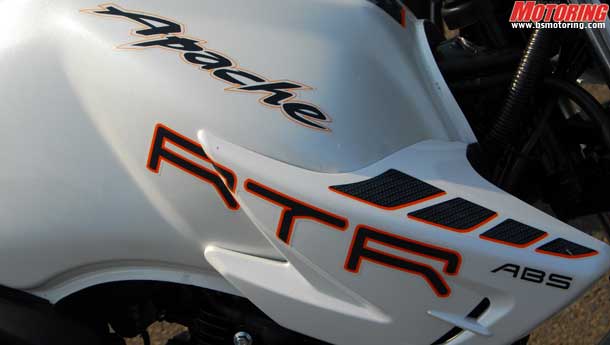 Two wheels – nothing surrounds them apart from air and the passing scenery. Still, unpredictable roads and idiots galore are things that motorcyclists live with every day. Everybody who’s ever climbed aboard a motorcycle will vouch for the fact that riding over a surface allergic to the tyres’ grip is a terrifying experience. With half the gripping surfaces as compared to a car, a motorcycle on a slippery road can lead to catastrophic results. Not, however, if TVS has a say in the matter. They’ve roped in Continental to develop an Anti-lock Braking System (popularly known as ABS) for the Apache RTR 180, but it took much more than a spanner and some elbow grease.

This ABS system has been developed in Germany, but it was fine-tuned in India. For one, this thing is calibrated for Indian conditions and habits. Take, for example, the fact that the software has the ability to adjust braking pressure when one wheel encounters a pothole and the other’s firmly planted on tarmac. Or the fact that since the majority of Indians purely use the rear brake, the ABS system works around this habit by providing a higher threshold at the rear than the front. All of these factors contribute to the fact that the Continental engineers have had to make this ABS system very durable indeed. All of that sounds peachy, but I needed to put the system to the test. The chaps at TVS were so sure of their product that they made the WAPCO TVS proving ground available to us.

This track is just the thing for checking ABS out – it has four surfaces consisting of dry tarmac, wet tarmac, wet blue basalt and ceramic that is as slippery as an oil-smeared road. Okay, so I’m a road tester, but hard braking on a surface as slick as a mirror is rather like jumping off a cliff without a parachute. To make the experience safer, and saner, TVS had mounted one of the test bikes with an outrigger on its right and left, to keep me and the bike upright at all times. Riding that rig took some effort, but a violent jig after I merely touched the brakes on the ceramic surface proved that the outriggers worked very well. And when I switched on the ABS on the second run, the bike stopped almost as well as it did in the dry. Sure, you have to ride dead straight and not add any manoeuvring input whatsoever, but at least the bike didn’t wash out totally.

I’ve ridden older BMWs fitted with ABS, and when their systems come on, you’re bombarded with immense pulsations on the brake lever and pedal – this can get unnerving to someone who doesn’t have a clue as to what’s happening. Taking that factor into consideration, TVS has toned down the intensity of the feedback when the ABS kicks in, but it still is discernible enough to let you in on what’s happening. But what happens when you want to be carefree and wild? Well, the ABS nanny can be switched off, that’s what. What’s more is that when you switch off the bike and start it up again, the ABS mode is automatically selected in case you forget to turn it back on.

I ventured off the tarmac to see how the ABS performs in the dirt, and I’ll sum it up in one word – fantastic. Even when I stood on the brakes while travelling at about 50 kph, the blinding response time of the ECU (0.1 sec) prevents the wheels from locking up and instead, the bike came to a dead stop without much ado. It’s remarkable how effective this technology is in saving lives. According to sources, Norway has the lowest rate of road accidents. Heck, that country can boast of almost zero accidents in the past three years, a statistic that technology like ABS has certainly contributed towards. In comparison, India registered more than 1.2 lakh deaths caused due to automobile accidents, of which about 40 per cent involved two-wheelers and trucks. This is definitely not an statistic that we should be proud of. However, one must realise that technology only saves lives when it is accessible to a large number of people. Hence, if the cost is prohibitive, the effectiveness is watered down. In that light, I think that the cost of the ABS system doesn't add more than around Rs 9,000 to the price of the stock 180.

For pricing of the TVS Apache RTR 180 ABS, click on the following link:
https://bsmotoring.com/news/launched-tvs-apache-rtr-180-abs/3267/1