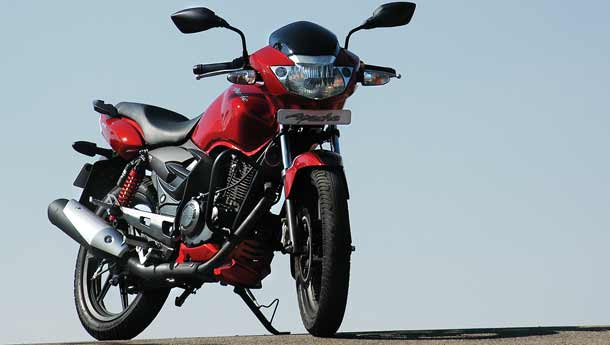 One of the most impressive motorcycles I have ever stood next to is the Aprilia RS125. Consider the big picture. The Aprilia is a learner-legal bottom of the barrel motorcycle. Admittedly the barrel is Italian, but still. What impressed me was not the performance (15 bhp on a two-stroke is eye-opening), it was the styling. Shrink-styling a 125 on the lines of your flagship would be a cinch. But the RS125 reeks of design effort. Every little nook and cranny has been designed, and not just in terms of shapes. The RS125 is a lovely thing to run your finger along. There are textures, colours and decals. What I’m saying is that the RS didn’t get dismissed as a tiny bike for newbies. It got the same attention as Aprilia’s largest.

Why am I going on and on about this? Because when they first unwrapped the shiny stuff covering the new TVS Apache RTR 160, the thought that kaw-pinged off my thick skull was, ‘Oh cool. Looks exactly the same, but it’s a lot more stylish!’ And before I had the time to absorb the apparent contradiction I’d just served myself, I was busy taking in all the little details. I love the way TVS have given the Apache a styling edge. The designers have crafted all of the usually ignored, functional-only bits into consciously designed articles. It’s no Aprilia RS125, granted, but I can’t think of any Indian bike that comes any closer.The basic tank/panels are the same, but TVS have painted the middle panel a neutral, matte grey. The tank and tail piece will come in a superb yellow, red, matte grey (called titanium; like the Isotope concept), silver and black. And notice the nifty little engine cowl that adds a lot of style points too. Sticker designers, a seriously overworked lot in India at least, have been given a rest. They only got to the neat racing stripe that runs all the way from the top of the tail lamp to the tip of the front fender. The stripe also forms part of the tacho face, but I’ll come to that bit later.

I could literally take pages to explain this, but here’s the thing, look at the pics. To summarise this part, everything – levers, pedals, grips, bar-end dampers, lights, dash – has received conscious design upgrades. The effect is one of effortless style. The Apache still looks compact and focussed, and now it also has sass. Oh, and what you don’t see in the pics are the red pinstripes that will go on all the wheels.

But, as I said, these are only part of the story. The other parts are RTR and 160.RTR stands for Racing Throttle Response (officially), Rip The Road (internal TVS expansion) and Recumbent and Tandem Rider (my attempt at humour, and an actual magazine at rtrmag.com). Essentially, TVS Racing have been involved more than ever before in the development of this motorcycle. The engine has grown to 159.7cc and it’s more than an overbore. The motor’s stroke was cut down to 52.9 mm and then the bore grew to 62 mm. TVS says the extra displacement allowed them to raise the torque while boosting power on top as well. By how much? The RTR is rated at 15.2 bhp (at 8500 rpm) and 1.31 kgm (at 6000 rpm). That’s a two kg heavier bike (still seven kg less than either the P150 or the CBZX) making a shade more power and the same torque than the first-gen Pulsar 180. How does that grab you?On the track, the RTR proves to be a crisp flyer. Throttle response is immediate and the Apache loves revs. With useable power almost off idle, the 160 will blow through 60 kph in 4.8 seconds, 100 kph in 17.69 seconds (all-figures claimed) and reach a top speed of 118 kph. The gearbox is the same as the old Apache, which is no bad thing. However, the full chain cover now looks a bit odd. One of the journalists at the launch suggested an open chain cover with an integrated hugger. That’s a nice thought...

On the chassis side, the big change is a whopping 40 mm longer swingarm that brings the wheelbase up to 1300 mm. This is a huge jump for the Apache, but still 25 mm less than the CBZX. What gives? TVS wanted to improve stability without losing much of the agility of the Apache. Suspension was retuned and that was basically it. Going into the sole corner at the TVS track, a sweeping right hander, the RTR feels planted and very accurate. You can pick your line, and put the bike exactly where you think it needs to go. Even when bumps have to be handled at full lean, the bike doesn’t run astray. Later, I tried the RTR on the Belgian pave and TVS have managed to iron out the harsh/bumpy patch in the ride quality. The new RTR still feels firm, but is compliant and will deal with most of the bad stuff.

Now note what’s bolted on the front axle. Yes, that’s India’s first petal disc (the extra surface area of the leading edge improves cooling). And instead of the usual 240 mm rotor, it wears a full 270 mm unit. That’s the same size as a Karizma. The disc is powerful and it produces seriously quick stopping action.

However, I did think that the RTR wants to sit up a bit on the brakes.What you’ve got is a neat looking machine that’s powerful and has a great chassis as well. In addition, TVS has given the bike everything it needs to battle the competing 150s. Like the split grab rail, a stylish dash with a LCD speedo, two trips, clock, odo and fuel gauge and an analog tachometer with a classy looking racing stripe on the dial. The RTR also has two-way adjustable clip-on handlebars, LED tail lamp (the sole styling detail that I think could have been better), rearset aluminium pegs and aluminium levers.

TVS says the Apache will go on sale in May and will be available all across the country at the same time. The current Apache will continue (sadly; please don’t be tempted to buy the cheaper Apache). The 150 Apache is among the cheapest of the 150s, so we expect the 160 to slot in at roughly the same price as the CBZX, or about Rs 59,000-odd ex-showroom Mumbai.For those of you who are wondering about the ‘unfairness’ of having a 160 running amuck in the 150s, I say why not? More power for the same money is always welcome. And as the Americans repeat ad nauseum, there’s no replacement for displacement. And before I get carried away, here’s the upshot. Coming in the middle of a whirl of re-stickered motorcycles, the comprehensively upgraded Apache certainly comes as a breath of fresh air. What remains to be seen is whether, in one month’s time, it will topple the CBZX, our Bike Of The Year, from its current place at the top of our 150 charts.