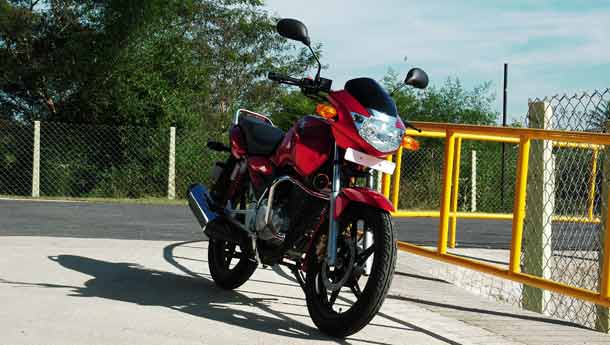 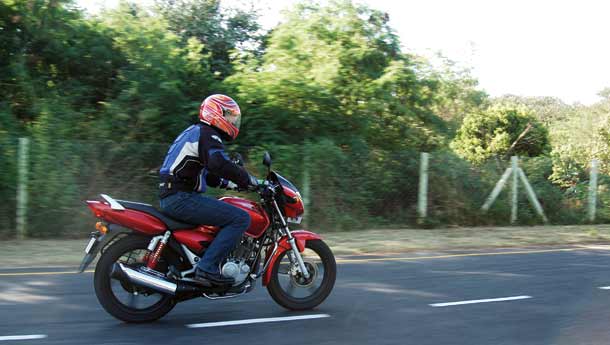 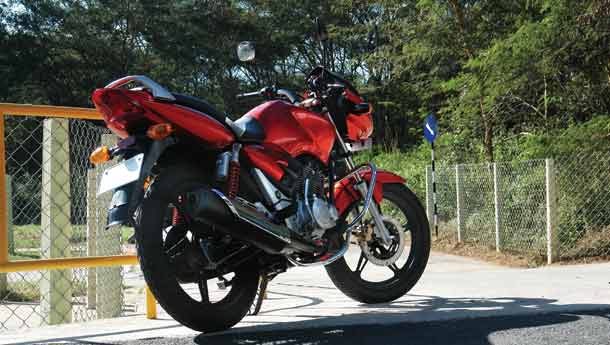 I’m hunkered down on one of India’s best-selling 150s. Throttle rolled to the stop, chin nearly on the tank and the brain screaming for more power. The scenery is a blazing quick streak heading the other way and like a doomed character in a horror film, I’m trying to run away from the glowing orange object in the rear view mirror. I say doomed, and not the hero character, because I’m not going fast enough. Within moments, the blur has passed me and is now pulling away steadily leaving to ponder the rather pretty butt-end on TVS’ new 150, the Apache.

It is a nice name. Far better than the suddenly explosion of really lurid monikers. Yes, doubting Thomas’ point out that ‘apuchhi’ means grandfather’s sister in malayalam, but to me, the Apache is the ugliest, and therefore (automatically) the most effective attack gunship ever built. And a warlike Indian tribe in the US which quickly built up a reputation for skillful strategy in battle and their fierce warriors. I don’t hear a age-faded ‘beta.’ I hear the ominous, thundering beat of two Rolls-Royce turboshaft engines, a clipped ‘Fox two,’ the whoosh of a Hellfire missile and a loud explosion signifying that the enemy just lost something important. The name is the first clue that the Apache is far from the usual TVS norm. Words like refinement, sober and civil, which have come to be the normal representation of TVS’ bikes were not uttered in the entire day I spent at the Hosur factory!

The new mantra for the 150 is aggression. And that is obvious in the looks. The inhouse design package takes cues from a whole range of sportsbikes from around the world, and where-ever I look, there are details that would not be out of place on a naked Benelli, cutting-edge Yamaha or slinky Aprilia. In a word, the Apache is a visually striking, aggressive, perfectly with-it motorcycle. In fact, I’d go so far as to say that my skills with the camera don’t allow me to do justice to how muscular and stylish the Apache really looks.

And they’ve thought of it all. The tank is sculpted. Not a line is out of place, there is no slack. The same theme carries on in the sidepanels and in the tailpiece. While the bike we shot was delightfully sticker free, we’re told a small piece of text will take its place on the downward facing plane of the tailpiece. Two standout details are the matte black triple strake on the sidepanel (did some one say, mirror image on apachE?) and the way the painted panel meets under the tail lamp properly. Then there is the  slickness imparted by thoughtfully placed allen bolts, the matte black saree guard, the slick two-finish (spokes are textured, the outer rims are smooth) black alloys...   Ah forget it. We’ll just call it exceptionally good looking and carry on with it, okay? When I thumb started the bike, my first reaction was ‘whoa!’ You see, for a TVS, this bike is loud. And that’s a good thing. Riding a silent bike is like watching Analyze This with the TV on mute. While the new 147cc motor is still based on the F2, they share as many components as Michael and Janet Jackson. Er... that’s without any references to malfunctioning wardrobes. For both.

Sheesh, led astray by celebrities again. TVS bumped up the compression ratio to 9.5 and added in the usual roller cam followers to start the engine development off. Then came intake and exhaust resonators for strong 3500-5500 rpm thrust and the benefits of running a large diameter intake and exhaust headers without the associated part-throttle response issues.  Finally, TVS added in an inductive (as opposed to capacitive) discharge ignition. TVS claims the sparks are twice as fat and last six times longer!

Translation: cleaner combustion. While TVS never brought up the issue of fuel economy (and neither did I), cleaner combustion is sure to net good efficiency. But more to the point for the Apache, it releases power. How much? Well, the torque peaks at 1.23 kgm at 6,000 rpm, enjoying a nice convex spread that helps midrange acceleration from 3500 rpm onwards. The power line climbs steeply to 13.5 bhp at 8,000, with the overrev tail off being marginal. Most of the 13-odd bhp remain available for as much a thousand more rpm. On the road it means, the Apache should blow by almost every 150cc bike that is currently on the road. Yes, including the Pulsar. The comparo will be smokin’ hot! Both the Achiever and the Apache are out to strip the Pulsar of its crown and both, I think are capable of it. If I were a betting man, I’d bet on the TVS.

And I’ll tell you why. You see, when I was riding the other bike and the Apache blew by, the rider, TVS Racing’s Arvind Pangaonkar was adjusting the freakin’ rear view mirrors. That’s why.   It isn’t the engine alone that makes the Apache an impressive package. I had to pick up my jaw of the floor when after fifteen minutes of pure jargon (vertical compliance, ADAMS simulation, flex-distortion ratio...) I surmised that TVS was telling me that instead of making the bike as stiff as a frozen fish, the Apache chassis incorporated flex into its handling module. It seems distinctly odd, but like the CBR1000RR, the Apache uses chassis flex to handling advantage.

Like the Victor Edge, the Apache as striking alloy wheels, with  a 17 incher in front, and an 18 incher at the back. The size difference was incorporated to set off the agility (and instability) of the short wheelbase (1260mm) with the gyroscopic stabilisation derived from mass of the rear wheel, which wears a 100/80-18 tyre.

Out on the track, it means tucking the knees into the tank and leaning the show over to the pegs is very enjoyable. The Apache corners with quick, confidence inspiring reactions to your inputs. Its stable and sure even when the pegs dig in and in a word, it’s lovely. A hill road and an Apache would go together as well as tequila and the sharp tang of salt and lime.

Some of you, inclined to really sporty riding, might spot the wide-feeling handlebar. Fret not. We hear TVS still have India’s first ex-factory clip-on handlebars as optional accessory. Yee haa! The whole aggressive-stable dance plays out with the ride quality and braking character of the Apache as well. On a smooth road, I was reminded of stiff but well-damped ride quality of a litre-class superbike. But on the purpose-broken Belgian Pave, the Apache found it easy to filter out shocks that’d have a Fireblade pleading for the Autobahn.

End of the day, I could not wait for the commercial launch. Which, unfortunately, is scheduled for February. Hey, that’s too long to wait... What do in the meantime, I say. Well, for starters, I swapped the bikes with Mr Pangaonkar. And won that drag race.