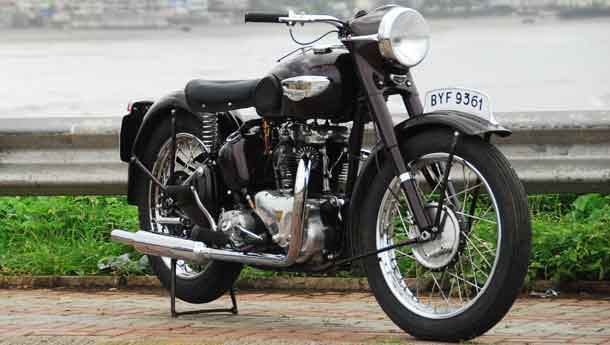 A cramp while putting a motorcycle on the main stand is what differentiates the men from the boys. The fact that I know this makes it pretty obvious which corner I’m standing in. Who ever decided to bolt a main stand to the rear axle of a motorcycle must have either had really long legs or a warped sense of humour. But the gentleman in question was considerate enough to offer a side-stand as an option – the first ever side-stand the Brits had on offer. The marque – Triumph, the motorcycle, the famous Speed Twin 5T.

Sayed Sajid, our vintage motorcycle restorer friend, had been telling me about this motorcycle for a while now. He’d kept saying that he was painstakingly restoring a ‘kind-of-rare’ motorcycle over the summer. And I had been following it through its various stages of build on my daily commute. Let me cut the flab and tell you that it’s been put together to a fault. Every bolt chromed, every brass collar in place, a Jaeger amp meter to accompany the Smiths chronometer and with Triumph branded footpegs and grips, this motorcycle ranks as one of the best-restored pieces of machinery I have seen in the past.

The 5T is one of the motorcycles that started the bodywork revolution for motorcycles. The nacelle – which clearly took its design cue from the scooters of the era – is one of the highlights of the 5T. The silver strip that’s swept back from the headlamp seems to be speed stripes in the making, elegantly designed speed stripes. Add to that swept-back handlebars that came standard on the primitive motorised cycles and we have a handsome motorcycle in this Speed Twin. Ed Turner designed the 5T to be minimalistic, compact and to have perfect symmetry – something that managed to draw my attention even 54 years later. The bulging tank on either side of the handlebars, glittering down pipes draped in chrome and the brass oil line neatly wound around the engine and cam covers lend a charming sophistication to the simple design of the 5T.

This motorcycle, the only proper twin in the market (BSA and Norton didn’t build one for another 10 years) was the one that every boy dreamed of. America’s bad boy bikers craved it as well, so Triumph overbored the 5T, coloured it black, sat Marlon Brando on it, and called it the Thunderbird. The 5T wrote Triumph’s success story. By the ‘50s they were flying most of their motorcycles across the Atlantic. But all credit to the 5T, it was a the design that would come to be a trademark Triumph image and would inspire motorcycle design for the next 40 years.This Triumph Speed Twin had rendered a thundering audition when I dropped in to see that all was well the day prior to the shoot. With my ears still thrumming from that performance, I heaved, waking the twin to the dry morning air, its voice exploding into a symphony that once enthralled every lawless, leather-clad loony on wheels. I’d have to say it still turns heads, drops jaws and parts traffic just as easily as Moses’ staff. Time to ride now, so I move the gear lever up one and slot second. Clearly I had no clue about the workings of a Triumph gearbox – my first ever Triumph, you see. The shifter was on the right (wrong) side but was engineered to work the Japanese shift pattern – truly an engineering oxymoron designed presumably by the ‘morons’ at Meridien.

Now Ed Turner, the father of the revolutionary parallel twin, is rumoured to have intentionally designed the engine to be as compact as possible, weighing just a few kilos more than the singles but adding tons of punch. With Sajid urging me to give her the stick, the throttle opened to the stop as I furiously made my way though the early morning traffic. It’s quite eventful actually, riding the Speed Twin fast. The rumble explodes into a thunder and the motorcycle surges ahead rapidly with my arms tucked in close to my body and my breath on hold till I’m almost blue, hoping that the brakes will come good when I summon them.
Picture this if you will to understand the complexities of this engine as I speed along. Two pistons pinned to parallel con-rods mounted on a central flywheel rise simultaneously, as the Amal carb breathes
air through an opening in the downpipe of the chassis and squirts a mixture of hydrocarbons into the inlet, the ignition firing 360° apart. This is one of the reasons for the smooth gurgling exhaust note that’s a signature to these twins. And to put that into perspective, BMW’s F800 twin still runs the 360° firing sequence very effectively. Triumph even offered an alternator on the 5T, the first of its kind in Britain and a sort of oil pressure gauge. So when experts touted Ed Turner’s twin as the most successful, widely accepted twin format to be ever introduced to the world of motorcycling, they were bloody right.

Now, even though Triumph was on the cutting edge of all this development, they stuck with some of their traditional technologies as well. So while all other Brit bike makers had swinging arm suspension, Triumph-ants had to make do with a rigid suspension that incorporated a very effective sprung hub. Yes, the notorious sprung hub that has popped a few eyeballs out and caused limbs to be scarred and severed. But other than that, there’s no problem with these four tightly packed springs that reside inside the hub. Between them and the sprung seat, they inspire  comfort just as well as some of the swingers I’ve been astride.

Triumph were on top of their game and it was the Speed Twin that got them there. From the mid-50’s to the end of the 60’s, the 5T underwent a number of upgrades, but was the corner-stone of motorcycles of that time. Rumours have it that Triumph went slow on their engine development after basking in the success of the Speed Twin and punters blame the fall of the British motorcycle empire on over-zealous boys from Meridien who refused to look past it even when the Japanese arrived on the scene with their four. This brings us back to choosing between the metal loving cockneys or the racer boys on their Jap toys. No doubt where my loyalties lie.