British motorcycle company Triumph Motorcycles has confirmed the delivery of the first 100 units of Street Twin motorcycles to customers in India. 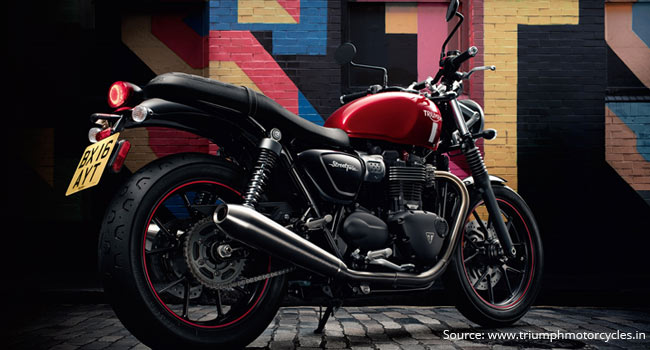 Priced at Rs. 6.90 lakh (ex-showroom Delhi), the motorcycle was launched at the Auto Expo 2016 in February in India. The company started booking for the Street Twin in January this year. The Street Twin, Triumph's most contemporary in the Bonneville range, is powered by an all-new 900cc engine, which can churn out 54bhp of power and 80Nm of torque at 3200rpm, paired to a six-speed gearbox.

The motorcycle that comes with a host of rider assists such as switchable ABS, slip assist clutch, Ride-by-Wire (RbW) and traction control. The Street Twin is available in four colours - red, silver, jet black and matt black.

The motorcycle is powered by a 1200cc, fuel-injected, liquid-cooled, parallel-twin engine, which is tuned to dish out 79bhp of power at 6,650rpm and 105Nm of torque at 3,100rpm with six-speed gearbox.

The Thruxton R that comes with clip-on bars, fully adjustable suspension and 17-inch front wheel is powered by a 1200cc parallel-twin motor. The price of this model is yet to be revealed.