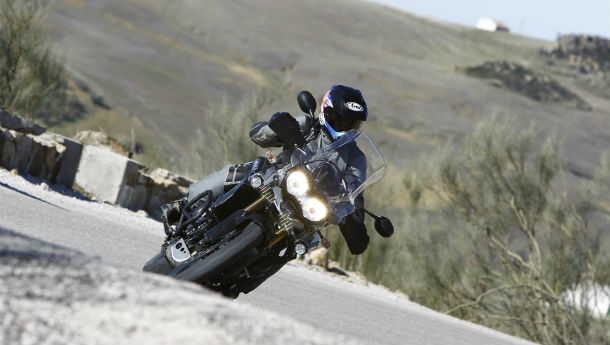 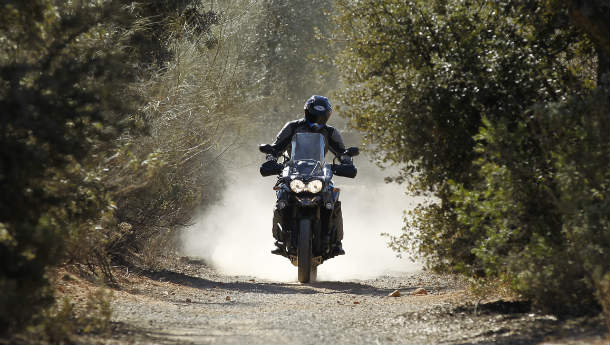 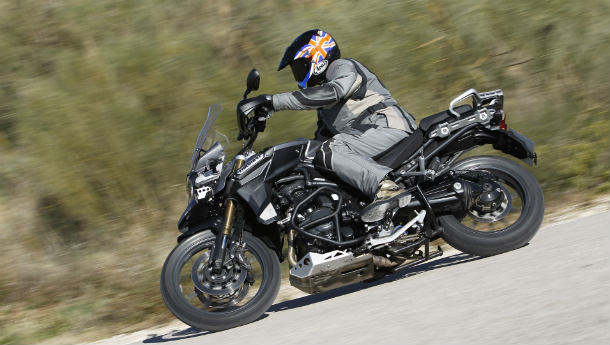 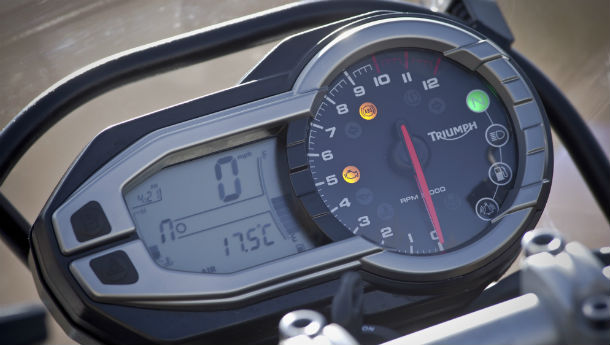 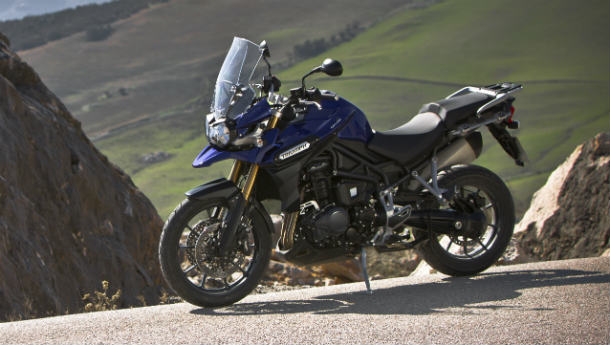 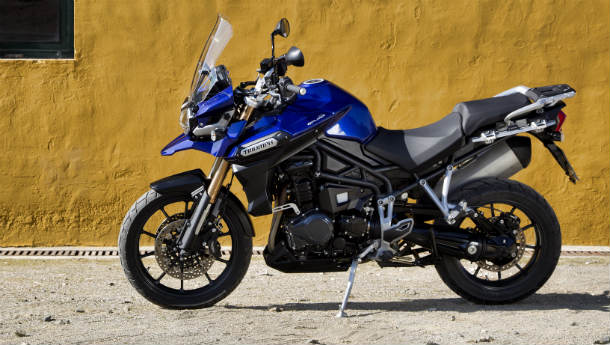 BMW Motorrad president Hendrik von Kuenheim seemingly makes it a point to never mention the T-word if he can help it – as in, Triumph! Instead, the boss of Europe’s largest motorcycle manufacturer invariably refers to the company that’s rapidly shaping up for Germany’s No.1 to be less of a minor irritant, more of a major competitor, as ‘our English friends’ – which is to say, NOT!

HvK is known to be particularly exercised by the way that Triumph has carved great chunks out of BMW’s market share with the Tiger 800 middleweight adventure tourer launched a year ago, especially its XC variant complete with a BMW-style ‘beak’ to the nose. That was however just a preliminary skirmish, because now the gloves are off for real with the debut of the Tiger Explorer 1200 multi-purpose maxi-enduro. It’s a bike that’s targeted directly at BMW’s R1200GS cash cow. This means war.


‘We identified certain must-have ingredients we had to incorporate in creating a genuine competitor to the BMW R1200GS benchmark, in what’s become a key growth segment of the market,’ states Simon Warburton, Triumph’s Product Manager. Yes, and right from the first, it was intended that the Tiger Explorer should undercut the ABS-equipped R 1200 GS Boxer by at least 3 percent pricewise in all markets.

The Explorer’s 1215cc watercooled three-cylinder 12-valve motor is a clean sheet design sharing no parts with any other engine in the current Triumph range and has been designed to have as few external oil and water pipes as possible, to avoid damage if/when dropped. Durability is achieved by spraying jets of lubricant onto the pistons. A Keihin ECU takes care of fuel injection, as well as ride by wire, though here there’s no choice of programmes as on, say, the Ducati Multistrada. Claimed peak horsepower for the new engine is 135 bhp at 9,000 rpm, with maximum torque of 12.1 kgm delivered at 6,400 rpm – but more to the point, there’s already more than 10 kgm delivered at just 2,500 revs, and this is held all the way through to the 9,500 rpm revlimiter.

The Explorer’s frame is a new version of Triumph’s familiar dual-tube steel twin-spar design, fitted with an adjustable seat. The six-speed transmission mates with a hydraulically-operated wet clutch, and the shaft final drive incorporates a torsional damper to reduce loading, while a metalastic shaft smoothes out vibration. The swingarm geometry obtained ensures that the rear end doesn’t pogo up or down under acceleration like on some shafties, while the Kayaba rear monoshock that’s adjustable for preload as well as for rebound damping, is fitted with a variable rate linkage, as well as being shrouded from mud and dirt.

The entire brake package comes courtesy of Nissin, with switchable ABS, and the 17-inch cast aluminium rear wheel carries a 282 mm disc gripped by a two-piston calliper, contrasting with a 19-inch front on which are mounted twin 305 mm discs with four-piston calipers. These are shod with Metzeler Tourance rubber, a 110/80 front, and 150/70 rear.  Front suspension comes via a 46 mm Kayaba upside down fork that’s adjustable only for preload.

The Explorer’s tough-looking, assertive styling is all thanks to the Xenophya Design consultancy. There’s a conscious focus on component quality and just to keep Mr von Kuenheim’s gander up, the Explorer once again incorporates a BMW-style beak, which Warburton insists was however only added later on, after it proved to have aerodynamic advantages in terms of stability. The fuel tank holds 20 litres of the combustible liquid and the perspex screen is five-way adjustable manually, with no electric option.

There’s no getting away from it – in the metal, the Explorer has genuine presence, even if with its 1530 mm wheelbase, this is a pretty massive motorcycle, especially when fitted with  accessories. Scaling in at 259 kg wet with a full load of fuel, it actually looks pretty daunting at rest, but that’s an illusion, because once you climb aboard and nestle in the well-shaped and reasonably plush seat, it sort of – shrinks!

Thumb the starter, and get ready to make motorcycle music via that great-sounding 3-1 exhaust as the big triple motor bursts into life, and settles at an idle. Following behind another completely stock Explorer you’d swear it had the freer-flowing Arrow aftermarket pipe fitted – the original exhaust sounds that good, plus it has a deeper, more mellifluous note than even Triumph’s established 1050cc three-cylinder motor. That’s especially the case if you surf the massive waves of torque which allow you to accelerate wide open from as low as 1,500 rpm – in top gear! No hiccups, no transmission snatch, no need to help it via the light-action clutch – the smooth but ultra-characterful engine just accelerates cleanly and purposefully away, picking up speed fast as the revs climb higher.

The Explorer has a completely linear power delivery via a literally diagonal power curve, running all the way to the 9,500 rpm cut out that’s surprisingly hard-action for a ride-by-wire digital throttle setup. The sweet spot of the motor is between 4,500-8,000 rpm, and if you wind it up in the gears it’ll accelerate very hard. But the engine is so torquey and flexible that it makes sense to take full advantage of that and cut down on gearchanging.

Do that, and you’ll find yourself holding third gear for long stretches of twisting, curvaceous highway, occasionally switching into fourth, then back again, letting the revs rise to around eight grand, then running as low as 2,000 rpm out of a slow turn. The 1200 Explorer motor is so torquey that fifth gear is a pretty pointless ratio, because once you get on a more open highway you’ll just stick it in sixth and go with the flow. 160 kph comes up at 6,000 rpm, just two-thirds of the way to redline, so this really is a serious mileater just as the R 1200 GS is, except the German bike doesn’t have The Sound! The Triumph is digitally limited to 220 kph, to do with stability when fitted with hard luggage, but at ton-up speeds it’s totally stable without luggage fitted – no shimmies, no weaving as the windstream catches the high handlebars, no misbehaviour of any kind.

Triumph’s first ever shaftie doesn’t rise and fall on the suspension as so many other shafties have done down the years. The best compliment I can pay the Explorer’s shaft final drive is that I completely forgot it was there until I got off the bike and caught a glimpse of it. For a bike with such a long wheelbase it handles well, with good ride quality from the Kayaba suspension over rough tarmac, and the wide handlebar gives excellent leverage for switching the Explorer from side to side through a series of curves, when the narrow 150-section rear tyre also comes into its own in helping hustle such a big bike around hard.

However, while the footrests are just low enough to produce a really relaxing riding stance, that handlebar is also awkwardly positioned too far forward, so that even a six-footer rider has to reach quite a long way to grasp it, which is quite inappropriate for a bike of this nature. However, after I caught myself touching down the footrests either side a couple of times while carving corners, I stopped to check the rear tyre, and discovered it was scrubbed in right to the corner of the tread. For a bike as capable as this on-road, the Explorer really deserves a 160-section rear tyre.

While complaining, Triumph also needs to beef up the front brake, which in spite of the dual 305 mm discs and four-pot calliper didn’t have as much bite as I’d have liked on a bike this heavy. You must really lean on the adjustable front brake lever and stamp on the rear to get the Explorer to stop. Apparently, this is because the brake was set up with offroad use in mind. But why compromise its stopping power in the normal everyday tarmac use that most of its customers will put it to?

A short stretch of riding the Explorer offroad, with the ABS switched off, revealed that the ultra-light throttle action that’s fine on tarmac becomes a little too sensitive for optimum control on the dirt, though when you do get the rear wheel spinning up, the traction control on Level Two (out of two) helps you recover OK, without excessive intervention. I tried switching it off altogether offroad, and found it was more controllable with the TC than without. The traction control is effective without being intrusive, as on some other bikes. This is an effective, well-mapped system, that’ll be of genuine benefit for any Explorer owner.

Even in badly surfaced corners with little grip, the Explorer feels balanced and reasonably planted, with plenty of feedback from both tyres. The soft spring rates and damping allow quite a bit of front/rear weight transfer that’s exaggerated by the long wheel travel – but you soon learn to adapt your riding to compensate. Unlike the GS and Multistrada, the Triumph does not allow you to stiffen or soften the suspension compliance on the move. High speed stability is excellent, and threading corners together is fun on it. On longer, straighter stretches, the intuitive cruise control would definitely provide a useful rest on long freeway runs.

Triumph’s new Explorer is a big, fast, comfortable bike that’s fun to ride on the road because of that torquey, turbine-smooth, evocative-sounding, three-cylinder engine. As a go-anywhere ride for crossing continents, or taking a short cut along  a gravel road, or – dare I say it – simply commuting in comfort without having to sit in line with all the other tintops, BMW’s English friends have now delivered a very serious rival to the R 1200 GS’s supremacy. Versus the BMW GS, think of it like a Spitfire against a Messerschmidt Me109 – they both have their strengths and weaknesses. The Triumph behaves more like a conventional motorcycle than the BMW, and is better on the tarmac whereas the BMW has more genuine offroad potential. The Explorer’s new triple engine slaughters the venerable air/oil-cooled Boxer motor in a direct comparison, but the Beemer’s superb brakes are much better than the Triumph’s detuned ones, and the BMW is more agile, suspension is a draw, and then you get down to personal preferences. Hmmm – call it a score draw?

Yes, the BMW management now has enough cause to start looking over their shoulders at what their English friends are doing, all right!